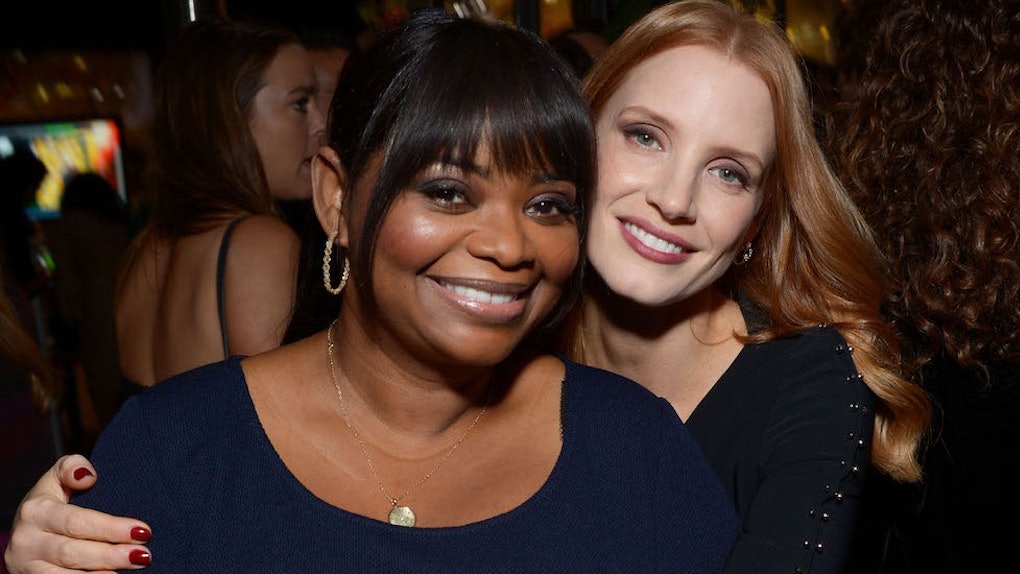 Equal pay for women has been an issue in every field of employment for so, so long now, but it sounds like things are finally starting to change in Hollywood. Octavia Spencer says Jessica Chastain helped her get the pay the Oscar-winning actress was worth for their upcoming comedy movie together during a Sundance panel, and retelling the inspirational story brought Spencer to tears. Seriously, grab your tissues for this one.

Last week, news broke that Jessica Chastain and Octavia Spencer will star in an upcoming holiday-themed comedy together produced by Universal, which is still untitled. The two actresses have co-starred before this in 2011's The Help, which earned them both Oscar nominations and Spencer a win. Well, apparently, this movie has a lot more significance for Spencer than just reuniting with Chastain — it is also the first time that she will be paid the amount she feels is due, and she credits Chastain with helping her make that happen.

Despite having an IMdB list of projects longer than almost anyone in the biz (over 65 movies and 45 TV show appearances, by my count), Octavia Spencer said that she is still not paid the same amount as male actors and white actors. Following heartening news about actresses demanding and getting the the pay they deserve, such as Ellen Pompeo's essay on the topic and the Big Little Lies cast revealing their big paychecks, and the formation of the Time's Up initiative, Spencer revealed how enthusiastic Jessica Chastain was about getting the two co-stars equal pay on their upcoming project. Spencer recalled the initial conversations with Chastain:

We were talking about pay equity with men and women, and she was like 'It's time that women get paid the same as men,' and I was like 'Yeah, Jessica! It's time!' We were dropping f-bombs and getting it all out there, and then I said, 'But here's the thing: women of color, on that spectrum, we make far less than white women. So if we're going to have that conversation about pay equity, we gotta bring the women of color to the table.' And I told her my story, and we talked numbers. And she was quiet; she had no idea that that's what it was like for women of color.

At this point, Octavia Spencer began to cry, ensuring the audience that they were happy tears.

When Spencer revealed to Chastain how much less she was making than white actresses, Chastain promised that she would include a Favored Nations clause in both of their contracts, which would ensure that both actresses would be paid the same amount. And now, Spencer revealed that she and Chastain are making five times the initial salary offering.

She said, 'Octavia we're going to get you paid on this film.' I said, 'I would love to do your film, but here's the thing: I'm gonna have to get paid.' She said, 'Of course, you and I are going to be tied together, we're going to be Favored Nations, we're going to make the same thing, and you're going to make that amount.' Fast forward to last week: we're making five times what we asked for. And that's because Jessica Chastain, she is walking the walk, and now I wanna go to what the men are making! I wanna get there. But right now if feels really good just to be in that conversation.

You can listen to Octavia Spencer recount her whole pay equality story in the video below. I've already queued it up to start at 19:30, when Spencer begins telling the story:

Octavia Spencer went on to underline the importance of having women produce movies as well as star in them — Jessica Chastain's production company is producing their upcoming holiday movie.