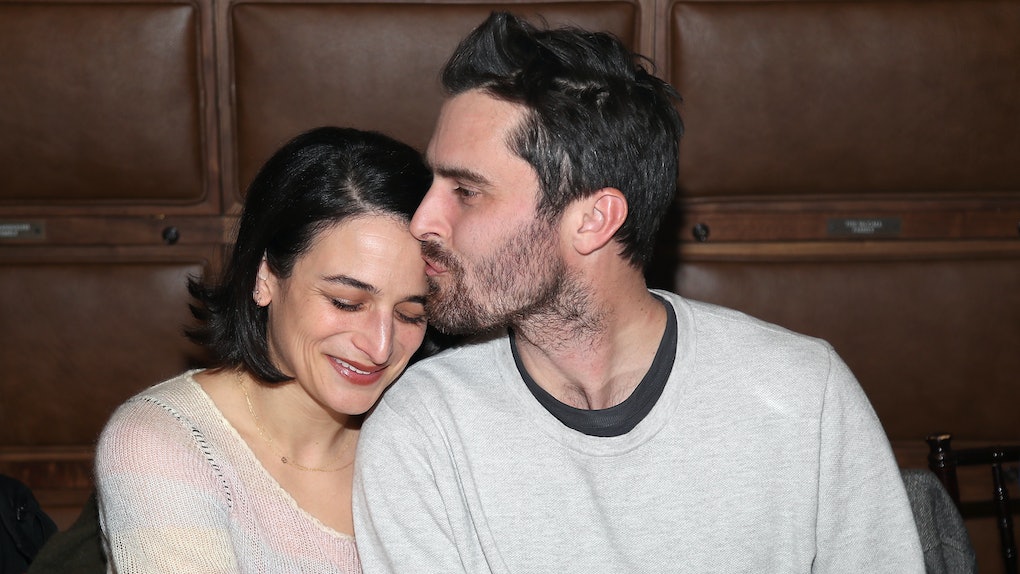 Jenny Slate Is Engaged To Ben Shattuck, & His Proposal Was So Sweet

Picture this: An abandoned castle in southern France, a lovely laid-back picnic, and just when you're feeling warm and carefree, your equally lovely, artist lover proposes to you. In comedian Jenny Slate's case, she doesn't have to imagine it, because it happened to her IRL. As of Sept. 9, Jenny Slate is engaged to Ben Shattuck, a Massachussetts-based painter and writer. Slate and Shattuck both took to Instagram to announce that they're sealing the deal.

Shattuck posted first, sharing multiple photos of his boo, leading with Slate in front of a weathered turquoise door. The caption for his photos read:

In an abandoned castle in southern France, I asked this woman to marry me. Here she is in front of a door the color of her soul. In LA / MA / Holland / Belgium / France thank you @jennyslate and UP UP UP to more adventures

Shattuck's Insta post was the norm for his feed, aka endearing photos of Slate in some idyllic setting that makes your heart feel like it's going to burst. Slate shared a few snaps well — mainly a sweet selfie next to Shattuck and with a flower behind her ear. Slate captioned her photos:

He took me to France and made a picnic and made me feel happy and free and then he asked me to marry him and i screamed YES. I love you @benshattuck_art, you are the kindest and brightest and I am so grateful and here we go and keep going

The two have been together at least since January, when they were first spotted together during the 2019 Sundance Film Festival. Other than that, not much is known about their relationship besides the occasional Instagram post — which isn't surprising, since Slate notoriously and rightfully values her privacy.

A bit about Shattuck: Next to conjuring up his own dark and ethereal paintings of flora, fauna, and landscapes, he also curates his mother's gallery in Westport, MA. Shattuck has had his written work published in The Paris Review, The Harvard Review, Lit Hub, and Kinfolk Magazine, just to name a few.

He also hosts Cuttyhunk Island Artists' Residency, a week-long writers' retreat in Cape Cod. Stans might remember Slate posting a pic of her and Shattuck gazing off into the distance at golden hour while holding a bottle of rum and gushing about how proud she is of her literary bae.

Prior to dating Shattuck, Slate was boo'd up with a fellow Massachusetts boy: Chris Evans, aka Captain America. The two dated for a little over a year, breaking up once in February 2017 and for good in March 2018. (During Evans' and Slate's break, she was briefly linked to Jon Hamm.)

Even though there isn't much tea to spill on Shattuck and Slate, it's safe to at least say: Expect sweet photos, a dreamy-but-quaint destination wedding, and an Instagram post that makes you feel soft.

More like this
Is Katie Thurston Engaged After 'The Bachelorette'? Her Instagram Is Sus
By Joyann Jeffrey
Prince William's Rumored 10-Year Anniversary Gift For Kate Middleton Is So Extra
By Corinne Sullivan
Are Clare Crawley & Dale Moss Engaged Again? This Update Has Fans Convinced
By Candice Jalili
Stay up to date