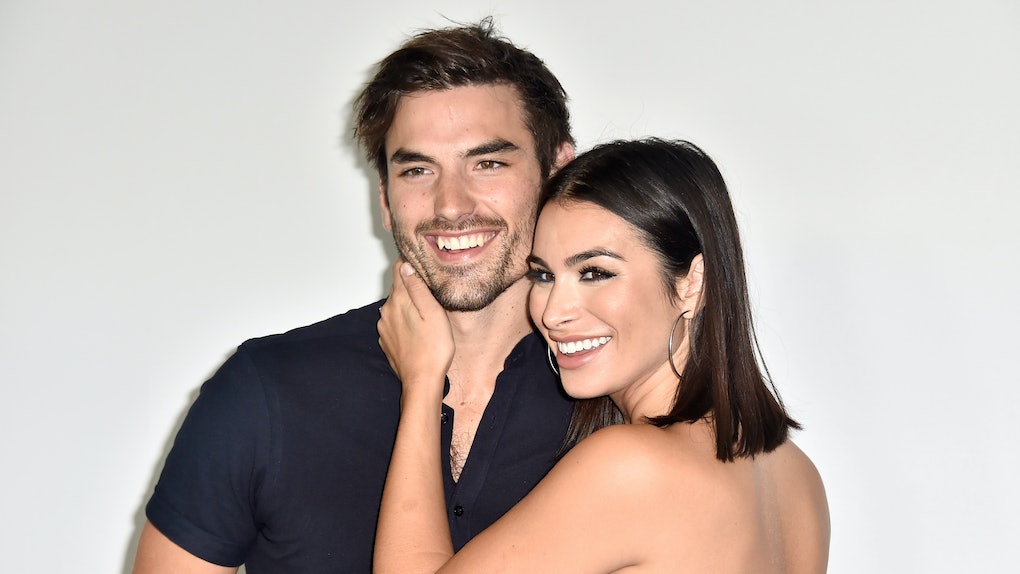 If there’s one real-life couple who truly embodies the plot of When Harry Met Sally, it’s Jared Haibon and Ashley Iaconetti. These two Bachelor alums have had quite a journey together over the past three years, first as friends and then as romantic partners. They finally tied the knot on Aug. 11 in Rhode Island, and now they’re blissfully living their new married life in California. Jared Haibon's quote about loving Ashley Iaconetti reveals how romantic their love story is — and just how much they appreciate one another.

The two stars, who fell in love on- and off-screen during multiple stints on Bachelor in Paradise, shared details about their relationship at an event for the dating app Plenty of Fish on Sept. 18 in NYC. When asked about the moment he knew Iaconetti was the one, Haibon tells Elite Daily, “There’s just so many moments that come to mind.” He recalls the first time the two hung out outside the show, at a charity event in Virginia. And then, of course, there was the time they discovered their physical chemistry. “The first time we really passionately made out,” he knew how deep their connection was. “It’s always an awkward thing going from friends to relationships,” he tells Elite Daily. “Like, is this gonna be weird? And it wasn’t weird.”

Iaconetti, for her part, knew instantly that there was chemistry. “I knew [he was the one] from first sight,” she says. “I think he feels a little guilty, because it took him a little longer. But I’m fine that it took him longer, as long as it happened.”

For anyone not briefed on Iaconetti and Haibon’s drawn-out love story, let me clear things up for you. They met for the first time on Season Two of Bachelor in Paradise in 2015, where Iaconetti was instantly attracted to Haibon. He wasn’t initially so enthusiastic, and after some awkward conversations, they both left the season single. Then, they spent time together outside the show and became good friends… or maybe something more?

By the time they both came back to BiP Season Three, it was clear they had a complicated relationship. However, they both ended up dating other people over the course of the next year — Haibon dated Caila Quinn, and Iaconetti dated Kevin Wendt. But these other relationships became the catalyst that helped bring Iaconetti and Haibon back together. In a YouTube video sharing their relationship timeline, Haibon described a trip he made to St. Lucia to tell Iaconetti he had feelings for her. And from there, they decided to give things a shot for real.

Iaconetti tells Elite Daily that Haibon knew he had to share his true feelings after seeing her with someone else. “It wasn’t like he realized his feelings in that moment,” she explains. “That was the moment where he was like, ‘Oh, I need to actually say something now.’” And for the record, it all worked out, and now they’re happily committed for the long haul.

What makes their relationship work so well? Iaconetti and Haibon both cite their enduring friendship as the foundation that makes them compatible. “We’re opposites where it’s good to be opposites, and we’re the same where it’s good to be the same,” Iaconetti says. “Strengths are weaknesses, weaknesses are strengths.” And Haibon reveals one of the things he loves most about his wife. “Everything you see from Ashley Iaconetti — Ashley Haibon — is what you get,” he tells Elite Daily. “That’s one of my underrated favorite qualities. When people are like, ‘Is she really like that?’ I’m like, ‘You honestly have no idea.’”

If romance novel characters came to life, they’d probably look something like these two. Haibon and Iaconetti got their happy ending, even if it took a while to happen. And now, they’re living proof that the most unexpected relationships can sometimes work out in the long run.