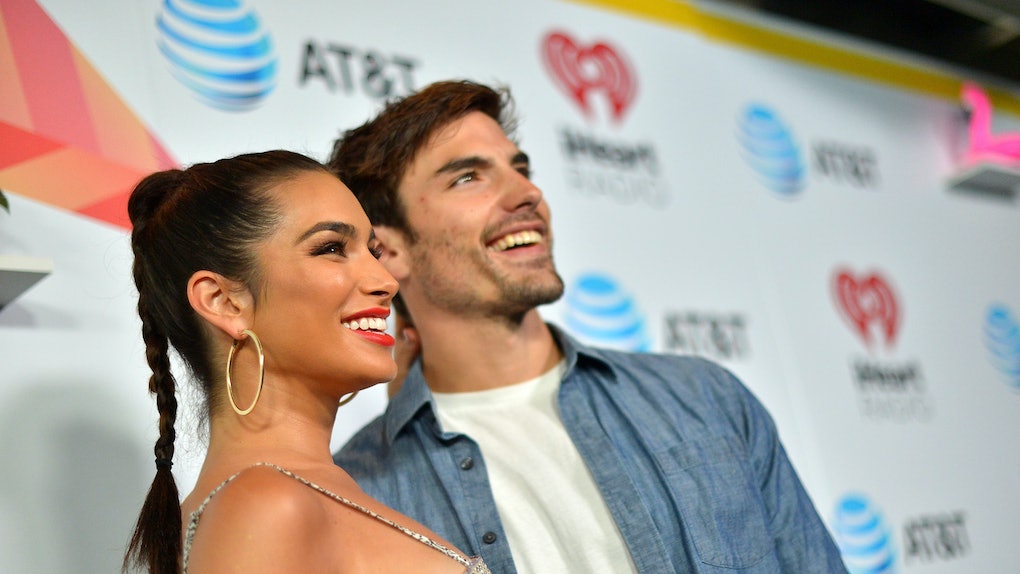 Everyone who's in #BachelorNation has witnessed the ups and downs of Ashley Iaconetti and Jared Haibon's relationship for years. Between the two of them, they've appeared on The Bachelor, The Bachelorette, Bachelor in Paradise, The Bachelor Winter Games, and Bachelor in Paradise Australia. Looking at Ashley Iaconetti and Jared Haibon’s relationship timeline throughout the time they've been on Bachelor franchise is literally looking at a friends-to-lovers story. As opposed to the usual Bachelor narrative, Iaconetti and Haibon's story wasn't neatly packaged into a two-month show. Their romance – and now engagement – took three years to develop, mirroring how love actually works for a lot of couples in real life.

#BachelorNation fans watch the franchise for the entertaining twists and turns, but also to see two people fall in love. It happens sometimes, OK? I admittedly was unsure if Iaconetti and Haibon would ever get their act together and be with each other. Haibon's uncertainty to admit his feelings for Iaconetti was definitely a hurdle he had to get over. But they found their way eventually. Here's how.

Iaconetti was fresh off Chris Soules' season of The Bachelor, and Haibon had just been a final four contestant on Kaitlyn Bristowe's season of The Bachelorette when they met on Bachelor in Paradise season two. The show's format is arranged in that each week, cast members of one gender ask out cast members of the other. The ones who are asked out on dates are the ones who give out roses. When Iaconetti got to choose her date, she chose Haibon. He gave her a rose.

They went on one date in 'Paradise,' but Haibon thought they were better off as friends.

The two went four-wheeling in Mexico, and seemingly had great chemistry from the start. They went on for the next few rose ceremonies giving each other roses, and had a Fantasy Suite date in Mexico. Iaconetti's virginity has been the subject of many a Bachelor storylines, but it appeared that she chose not to have sex with Haibon in the suite that summer. They left Paradise as friends, with Haibon still having lingering feelings for Bristowe, and Iaconetti still pining after Haibon.

They were guests at Jade and Tanner's wedding, and it seemed like Iaconetti still had unresolved feelings for Haibon.

Former Bachelor in Paradise contestants Jade Roper and Tanner Tolbert's wedding. The wedding took place on Feb. 14, 2016. It seemed like the back-and-forth between Iaconetti and Haibon was still happening, and not slowing down anytime soon.

The two remained friends, attending a variety of #BachelorNation events together and posting pictures of one another on social media.

Fans were all heart-eyes about these two's Instagram pictures with one another constantly. Comments usually included a variation of "get together already!" and it seemed like people were rooting for these two to make it more so than couples who were... engaged. They hosted Bachelor events, walked red carpets, and made appearances on one another's Instagram accounts, but solidified that it was all platonic.

They returned to 'Bachelor in Paradise' the next summer, but Haibon was surprised Iaconetti showed up.

According to Iaconetti's recount of the lead-up to Paradise that summer, her and Haibon's friendship oscillated between platonic and romantic for that year after their first stint on Paradise. Iaconetti surprised Haibon by showing up to Paradise in 2016 – but only after Iaconetti's friend Caila Quinn had already made her debut in Mexico.

"Yes, I was concerned about [Caila Quinn] going to Paradise because I didn't want Jared falling for someone in front of my eyes, OK," Iaconetti wrote in her Cosmopolitan recap in 2016. "I know his type! Still, Caila assured me on multiple occasions that even if she did Paradise, she wouldn't want to ruin our friendship by dating Jared, and that Jared wasn't her type inside or outside (albeit, she'd never met him). Without her in the mix, Jared and I both didn't think there'd be anyone in Paradise he'd really fall hard for — so I didn't prepare myself to walk into that."

Haibon and Quinn began dating on Paradise, and left the show to continue a relationship off television. They broke up soon after, though, due to the difficult drama they had to deal with. Haibon and Iaconetti, though, stayed friends.

Iaconetti began dating 'The Bachelor Winter Games' contestant Kevin Wendt when Haibon admitted he had deeper feelings for her.

On The Bachelor Winter Games in December 2017, Iaconetti began dating former Canadian contestant from the franchise, Kevin Wendt. They dated off the show, too, continuing their relationship long-distance between Iaconetti in California and Wendt in Canada.

Sometimes, all it takes is for that person to see you moving on for them to realize how they feel about you. That's what happened to Haibon. In Iaconetti and Haibon's telling of their story on a YouTube video (below), Iaconetti said she made Haibon prove he was really in it for the long haul with her before she left Wendt. But once Haibon "proved" himself, the two jumped into a relationship.

They announced their relationship through a People magazine story and YouTube video, and got engaged soon after.

Because they've known each other for years, their relationship has moved faster than "normal" since making things official. Iaconetti and Haibon shared a detailed video of their relationship progression on May 22, and got engaged filming on the next season of Bachelor in Paradise (possibly before that?) on June 17.

What's next for this couple? In true Iaconetti and Haibon style, possibly a TV wedding. Honestly, I wouldn't expect anything less.