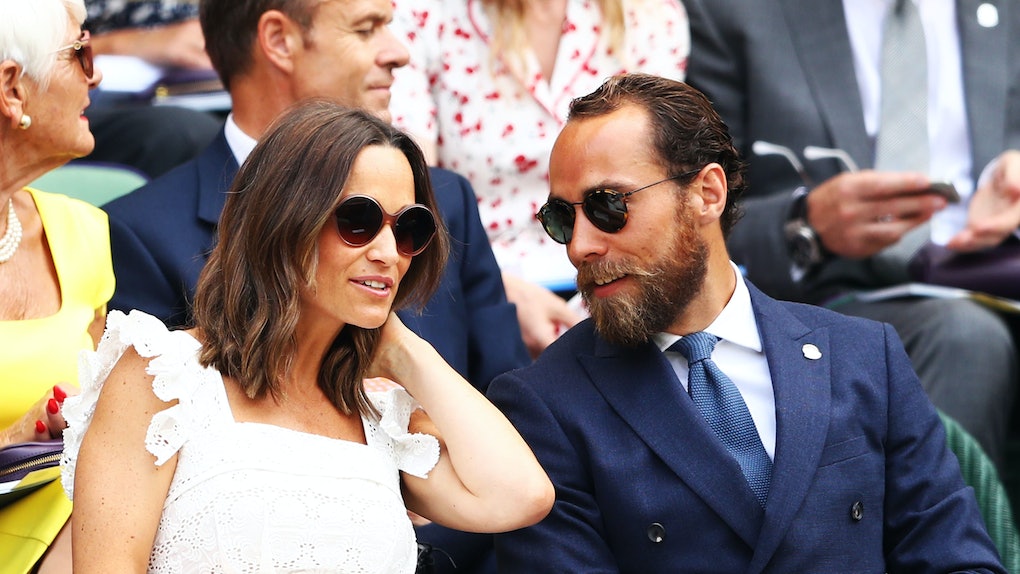 You know that scene in The Princess Diaries when Mia Thermopolis is invited to the beach party by that swoon-worthy guy from school? There's a slow-pan to them sailing in cozy sweatshirts while the salty sea kicks up at them and they laugh. Well, get this — there's a real-life couple that was also caught sailing romantically by cameras! It's come to the world's attention that James Middleton is dating Alizee Thevenet, and they seem super happy together.

James Middleton, pictured above with his sister Kate Middleton, the Duchess of Cambridge, is a lesser known extended royal family member but still possesses that extended royal family charm. The Daily Mail reported earlier this week that, "French financial expert Alizee, 29, and James, 31, have been dating for six months and her father has said they are 'deliriously happy.'" They also shared that Alizee grew up in six different countries – Germany, Indonesia, Chile, France, Belgium, and England. They also shared that she has spent the past five years living in London.

Despite dating for the past six months, the Daily Mail says that two have just recently made things "Instagram Official" with an absolutely dreamy selfie. The two were just on vacation in the Carribean in early May, and from the looks of it, they had an amazing time. According to Hello, the couple were holidaying with Middleton's sister, Pippa Middleton, her husband James Matthews, Pippa's brother-in-law Spencer Matthews and his wife, Vogue Williams.

Despite this stunning selfie —which really is worth a 1000 words — and demonstrates how cute they are together (also those sweaters? I need), the couple has not yet spoken publicly about their relationship. Thankfully, Alizee's father, Jean-Gabriel Thevenet, took a moment to talk with the Daily Mail. "My daughter Alizee is very happy with James, they are very much in love. James is a very charming man. I have seen the pictures of Alizee and James in St Barths. They look very happy. Alizee is very happy living in London."

Middleton has certainly not gotten as much coverage as his siblings Pippa Middleton and the Duchess of Cambridge herself. However, Middleton did take a brave and important step in discussing his battle with depression. "I know I'm richly blessed and live a privileged life. But it did not make me immune to depression," he wrote in an editorial for the Daily Mail. "If I could leave you with just one thought, it would be this: 'It's OK not to be OK.' "It's pretty remarkable that Middleton is sharing his experience with mental health in such a public way. Middleton has been a member of the extended royal family since Kate Middleton's marriage to Prince William in 2011. He is also an entrepreneur and avid dog lover (based on his Instagram grid alone). ‌

It seems as though things are going pretty great for Middleton. If his relationship with bae is the cake, sharing it with the world via a sail boat in the Caribbean is certainly the cherry on top.