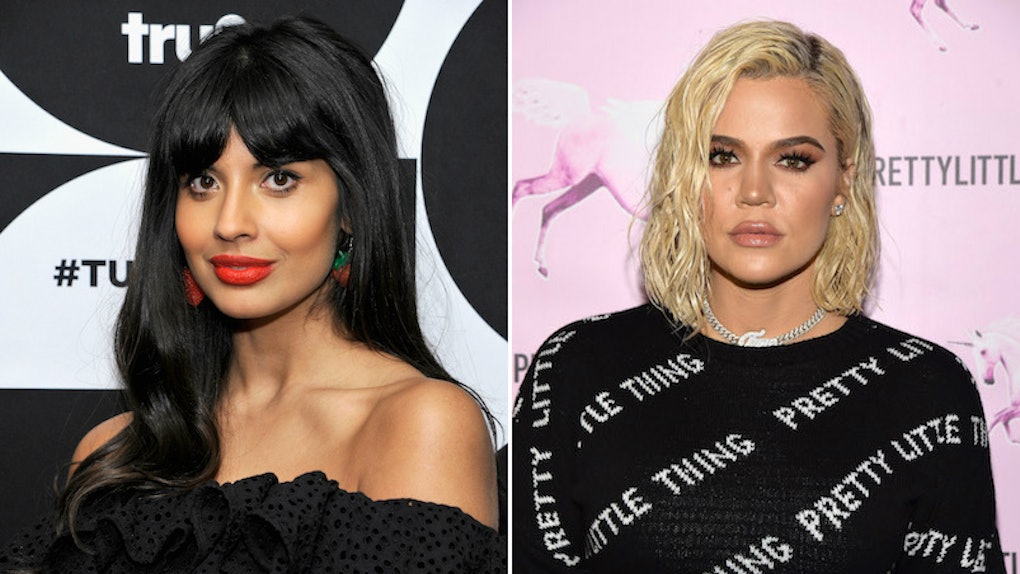 Jameela Jamil for president. The Good Place actress has kicked down the door to Hollywood, charged into mainstream media, and brought a slew of self-love and body-positivity with her. Hallelujah! Jamil is known for her loud-and-proud stance against diet culture and has made it her mission to change the narrative around weight loss. One thing she's taking on head first is the epidemic of celebrities irresponsibly endorsing dieting products, which leads me to Khloé Kardashian. Jameela Jamil's response to Khloé Kardashian promoting meal replacement shakes might seem, I don't know, direct at first, but her message is so important. The ultimate takeaway: "get thin quick" dieting products aren't healthy, and celebrities who claim that they're the key to their fit bodies are doing a major, dangerous disservice to fans who idolize them.

Let's be real, I keep up with the Kardashians. I'm fascinated by their sheer wealth, seemingly endless exposure, and multiple mansions. I'd be lying if I said I haven't looked at their nipped waists and contoured noses and thought, "I could never wear that latex dress." Alas, I'm of the extremely volatile and impressionable public that can often be tricked into thinking that if I just did whatever these celebrities are doing, then I could look like them, too. (I'm not proud of it, but it's hard to turn off a lesson that has been so deeply ingrained into my brain!) It's also why I'm so relieved and hungry (no pun intended) for Jamil's counter-perspective and wealth of fresh diet-culture knowledge.

Jamil's ongoing message is that these diet smoothies, teas, pills, and what have you (a) do not work, (b) have harmful, lasting physical side effects, and (c) are totally unnecessary, so just stop it. You're beautiful. Enough.

Kardashian shared a selfie of her abs next to a pink tub of Flat Tummy Tea meal replacement stuff on her Instagram. She captioned the photo,

"#ad Loving how my tummy looks right now you guys! I brought @flattummyco’s meal replacement shakes into my routine about 2 weeks ago, and the progress is undeniable✨P.S the shakes are 20% off today and you can get Flat Tummy Tea at a really good deal too. Go check it out!"

Jamil saw this and thought, "Oh, helllll no." She called BS right away in a big long comment. Jamil's response was caught by @CommentsByCelebs Instagram account who shared a screenshot of her response. She wrote,

If you're too irresponsible to: a) own up to the fact that you have a personal trainer, nutritionist, probable chef, and a surgeon to achieve your aesthetic, rather than this laxative product... And b) tell them the side effects of this NON-FDA approved product, that most doctors are saying aren't healthy [...] then I guess I have to.

Jamil did empathize with Kardashian's position as a majorly exposed celebrity stating, "It's incredibly awful that this industry bullied you until you became this fixated on your appearance. That's the media's fault." She then added, "But now please don't put that back into the world, and hurt other girls, the way you would have been hurt. You're a smart woman. Be smarter than this."

Kardashian has yet to respond, but you know KUWTK fans are out here like: