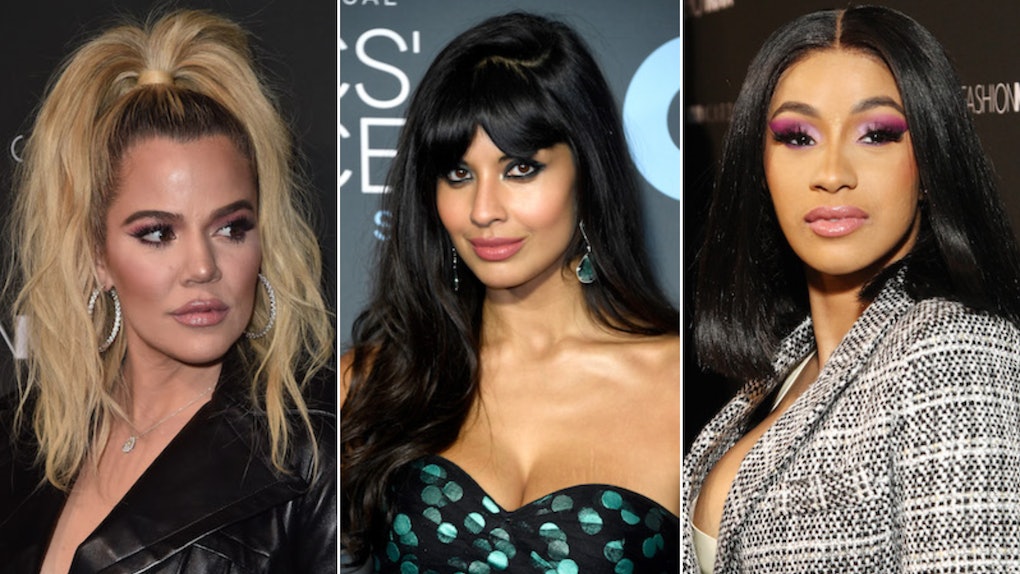 Have you guys heard of Jameela Jamil yet? Because you should have. She's one of the most hilarious actresses on television today playing the role of Tahani in NBC's The Good Place. She is also wildly, intentionally, strategically against diet culture and the unrealistic beauty standards that are so prevalent in her industry. In fact, she's made it her mission to call out female celebrities who promote weight loss products including some of your favorites. Jameela Jamil's comments about the Kardashians and Cardi B promoting detox teas are really important and it's critical fans hear her out.

Jamil wants to make one thing clear: she doesn't dislike the Kardashians or Cardi B. She just hates weight loss messaging. Jamil explained to Entertainment Tonight that as a teenager she, like most women everywhere, felt a certain pressure to look a certain way. She said she became someone who "starved herself for years, who spent all her money on these miracle cures and laxatives and tips from celebrities on how to maintain a weight that was lower than what my body wanted it to be." According to Jamil, as a result, she will have digestion and metabolism problems for life.

Today, she runs the Instagram account @i_weigh, a "movement for us to feel valuable and see how amazing we are beyond the flesh on our bones." She's also still calling out plenty of major celebrities for their pro-diet sponsorships including some of the Kardashian sisters and Cardi B.

Take the following tweet for example, which features screenshots of celebrities' Detox Tea promotions and the following caption: "Give us the discount codes to your nutritionists, personal chefs, personal trainers, airbrushers and plastic surgeons you bloody liars."

Prior to that, she retweeted one of Cardi B's ads specifically, writing the caption:

They got Cardi B on the laxative nonsense “detox” tea. GOD I hope all these celebrities all sh*t their pants in public, the way the poor women who buy this nonsense upon their recommendation do. Not that they actually take this sh*t. They just flog it because they need MORE MONEY

She then followed that up with a parody video featuring herself "promoting" a weight loss shake from the confines of her bathroom toilet.

It's hard to see how tweets and posts like this aren't personal. But, according to Jamil, they're not. She told ET,

I love Cardi B! I just don't like laxative tea! That's all. That's my only problem. That's why I was sad she was promoting it.

She added, "I think people think I hate the Kardashians! I don't hate them. I just, I really hate laxative tea."

The truth is, Jamil is proudly on a mission to gross the public out so much that dieting becomes unsexy. "I think I'm slowly but surely making it too disgusting and too embarrassing to promote those teas for everyone," she told ET. "And then we could all live happily ever after!"

The truth is: a world without misleading and unhealthy dieting is a world I'd do almost anything to live in. I started following @i_weigh as a start.