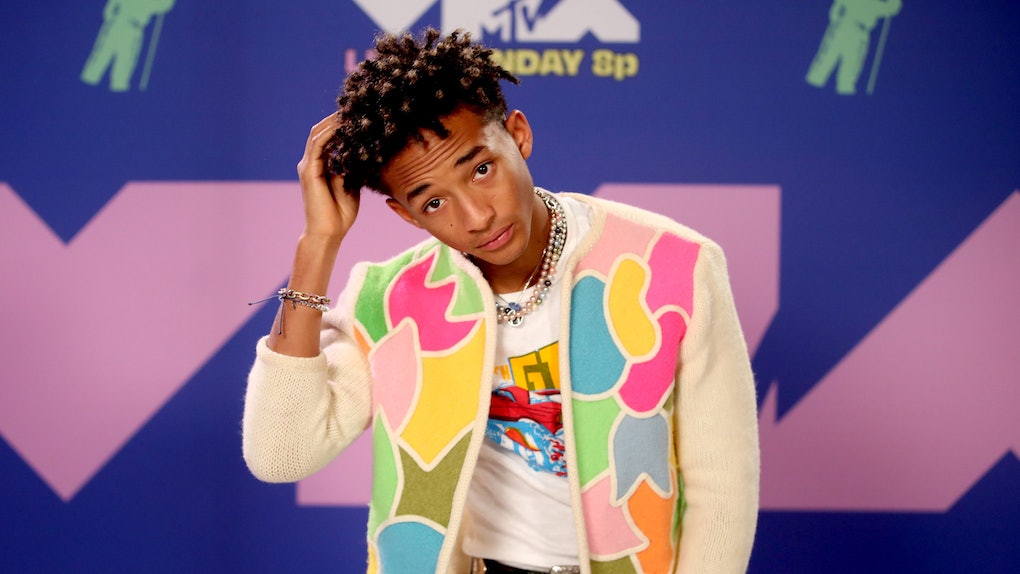 It's been a busy couple of weeks in the Jaden Smith rumored romance department. That's not surprising, as Jaden Smith’s zodiac sign, Cancer, is so easy to connect with on an emotional level, which means finding potential suitors is rarely an issue. Opening up and letting someone in, on the other hand, can be a bit of a struggle for this emotional water sign.

If you haven’t been keeping up, Smith was recently spotted getting cozy on the beach with Sofia Richie on Sept. 7, fresh off her breakup with Scott Disick. Smith has since clarified that it was just a friendly outing. "You know, me and Sofia have been friends for like 10 years," he explained during an appearance On Air With Ryan Seacrest. "We've been going to the beach pretty consistently for 10 years, too. And yeah, we're just homies and we love each other. It was fun."

The rumor mill started turning again on Sept. 22, when Smith was snapped holding hands with model Sab Zada in Los Angeles after what The Daily Mail reports was a date night at the movies. (Elite Daily reached out to Smith’s representatives to confirm the reports that they may be dating, but did not hear back in time for publication.)

While fans won't know what is (or isn’t) happening in Smith’s love life until he chooses to share the deets, we can get a hint of what kind of partner he is based on his zodiac sign.

Cancer is all heart in their relationships.

While Cancer is known for being a little slow to open, it's with good reason. Because they're so in tune with their emotions, wounds run deep when they have their heart broken. After being burned a time or 10, they learn to take things slow and build up trust before letting people in. Once Cancer knows it's safe, however, the emotional floodgates open. They're one of the most loving and devoted signs in the zodiac. They love with all of their being, and there's nothing more important to them than taking care of tending to the emotional needs of their partner. They're great listeners who are incredibly empathetic, so you can always turn to a Cancer partner through the good times and the bad. They're also thoughtful, generous, and true romantics.

Loyalty and trust are everything to Cancer.

If there's one trait Cancer appreciates above all others, it's loyalty. Cancer needs security and reliability in their relationships. They take great pride in being steadfast and loyal to the people they care about, and they expect the same in return. It takes time to earn a Cancer’s trust and they're very quick to revoke it if you give them a reason to. Once they're scorned, it's almost impossible to get a second chance with Cancer.

Sex is a very emotional experience with Cancer.

Cancer is ruled by the Moon, the heavenly body associated with emotion, so everything they do has an emotional component, especially when it comes to sex and intimacy. They want both parties to be present and are more interested in making love than hooking up. There's lots of eye contact and communication throughout. While Cancer can enjoy the occasional passionate quickie, they prefer to take their time and focus on the experience as a way to deepen their emotional connection to their partner.

Cancer can be moody and passive-aggressive

Cancer makes for a stellar partner overall, but every sign has its struggles. In the case of Cancer, it's that, with all that emotion brewing inside them, they also tend to be fairly moody. If you aren't able to recognize the signs and manage to get on Cancer's nerves, they can even get a bit snappy. When they're angry, rather than being direct, they can tend toward passive-aggressiveness. It takes a partner who can cut through the noise without getting their feelings too hurt in the process to fully resolve any issues.

Despite these minor issues, Cancers like Smith make for some of the sweetest, most attentive, and loyal partners you could ever hope to date. Consider your celebrity crush on Smith fully validated.