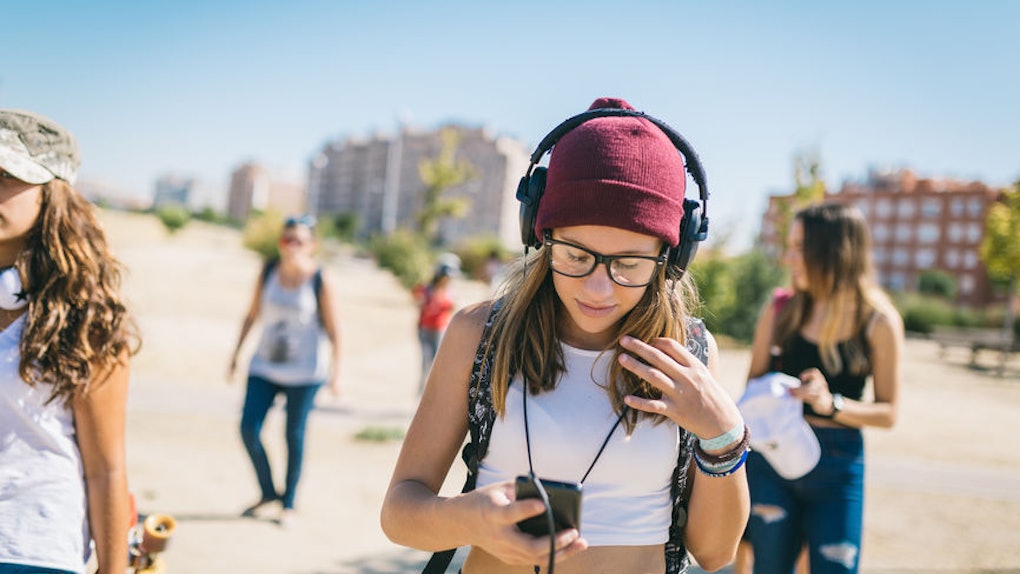 Is Texting While Walking Dangerous? Science Says It Distracts You More Than You Realize

If you take a look around you when you're out in public, chances are, many of the people you see will have their faces buried in their phones. This just seems to be a sad reality of modern life, y'all. While a little Instagram-scrolling and keeping up with a massive group text might make sense in a waiting room or on the subway, it makes a little less sense to keep up with your conversations while, say, walking. But does that stop people from doing it? Not really, no. But you better believe that texting and walking is dangerous, as new research shows it seriously distracts you from your surroundings, as well as the task at hand — what's more, you probably aren't quite as adept at doing it as you may think.

So here's why it's important to just put your phone in your back pocket while you stroll over to the grocery store (other than the fact that it is a huge pet peeve of mine to not do so): You probably know that it's seriously bad news to text and drive, but a new study done by engineers at the University of British Columbia, published in the journal Transportation Research Record, shows just how much texting and walking can affect you.

The researchers studied the walking habits and movements of over 300 pedestrians at a busy intersection in Kamloops, a city in British Columbia, Canada, footage of which was captured over the course of two days by engineers who placed three cameras at the intersection. After analyzing the footage, ScienceDaily reports, the researchers found that more than one-third of all pedestrians were distracted by their phone in some way, whether they were just looking at the device, texting, or talking on a phone call. But it wasn't just that these people were clearly distracted by their phones; the researchers were able to demonstrate that the way they walked and responded to things around them — traffic, other people, etc. — was clearly affected by the fact that they were looking at their phone and walking at the same time.

Rushdi Alsaleh, a PhD candidate in civil engineering at the University of British Columbia and a lead author on the study, said in a statement,

We found that more than a third of pedestrians were distracted by their cellphones, texting and reading or talking and listening. Distracted pedestrians had more trouble maintaining their walking speed and gait and took longer to cross the road, increasing the potential for conflict with vehicles.

Mohamed Zaki, another study author and research associate in the department of civil engineering at the university, added,

Interestingly enough, the way in which the distracted pedestrians used their phone — texting, a phone call, etc. — did have some effect on how they walked.

According to ScienceDaily, pedestrians who walked while taking a phone call turned out to have a slower pace, though the length of their strides didn't change. Pedestrians who were texting or reading something on their phone, on the other hand, weren't exactly slower walkers, but they did have longer strides, the research found. Either way, the distraction of a phone is, clearly, not so great for walking safely and efficiently.

Now, while many of us have gotten pretty darn cocky about what we think we can and can't do while we're on our phones, boundaries are probably a pretty good idea here. After all, this is not the first time that walking and texting has been recognized as potentially hazardous: A study done by researchers at Stony Brook University found that people who use their phone while walking are about 61 percent more likely to veer off their intended path, not to mention it can actually increase the distance to their destination by about 13 percent. While I suppose that might be good for getting your steps in for the day, it's not great for punctuality, and certainly not good for your safety, and that of everyone around you.

So I think the lesson here is pretty clear, folks: Keep your eyes facing forward, smile at strangers, look both ways when you cross the street, and stay off your GD phones on the sidewalk.