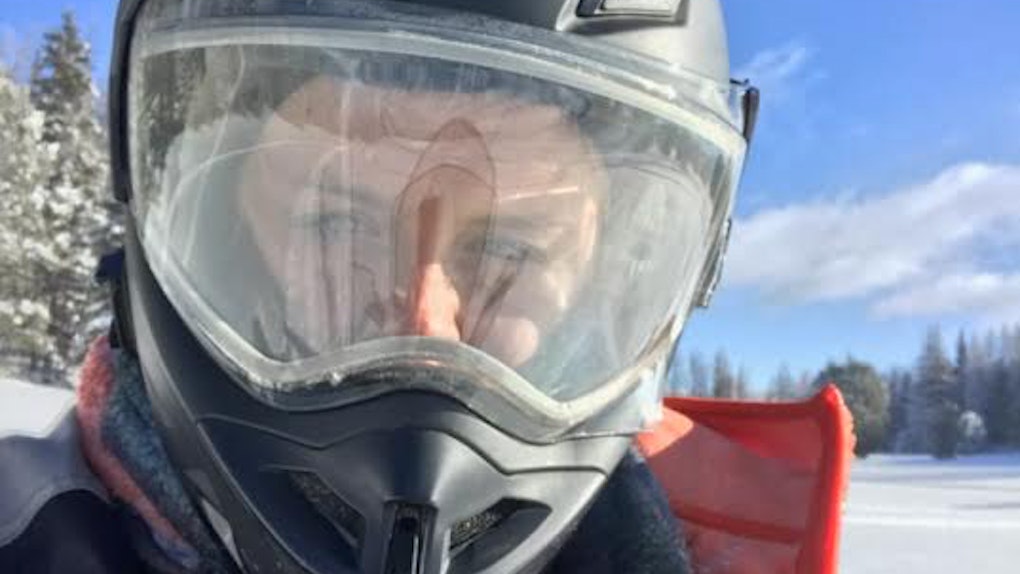 Is Snowmobiling A Good Workout? I Tried It For The First Time & It Kicked My Ass

It was way below freezing on the Togwotee Pass in Teton County, Wyoming, and I wore a bulky, full-body snow-suit as I prepared to get on a snowmobile for the very first time. The beauty near the Bridger-Teton Forest and Grand Teton is breathtaking, but the natural wonder was eclipsed, unfortunately, by my rapidly increasing anxiety. But with my body feeling tense from my travels from New York to Wyoming, I wanted some exercise to loosen me up a bit. Although, is snowmobiling actually a good workout? Based on the waiver I was forced to sign about the potential risks of injury associated with this winter sport, I'm going to go with "yes" to answer that question.

As I got closer to actually getting on the snowmobile, I half-jokingly asked my guide, Jason Smith, "So, uh, what is the likelihood of death?"

Let me tell you, not only did I not die, but my initial curiosity as to the fitness benefits of snowmobiling were more than fully answered by the time I hopped off the vehicle at the end of the day. In fact, it proved to be the best and most enjoyable form of exercise I've had in a long, long time.

A group of 17 of us on a media trip to Jackson Hole were in the hands of an outdoor and wildlife tour company called Scenic Safaris during our snowmobiling trip. Like I said, it is damn cold in Wyoming, and even colder up in the mountains, so after getting totally geared up in snow-suits, gloves, a balaclava (aka that ski mask thing that completely covers your head), weather-proof boots, and of course, those massive helmets, we made our way to the mountain near Togwotee Mountain Lodge. The instructors ran through the basics of safely using the "rigs," emphasizing the importance of staying aware of our surroundings at all times.

This is not an accurate depiction of how nervous I was.

After breaking up into groups with assigned guides to lead us, I told my own instructor, Jason, how nervous I was (honestly, I almost opted out at the last moment to ride on the back of someone else's snowmobile). He very kindly told me to get on the snowmobile right behind him, and to follow his path and what he was doing as best as I could.

Shaking off the nerves as much as I could, I took a look at the "rig," which looks a bit like a motorcycle with skis on it. Honestly though, she's a beaut.

While I wasn't not the only snowmobiling virgin in my group, others around me assured me I would be just fine. They compared snowmobiling to sports like jet-skiing, or riding on a motorcycle. But I haven't done either of those (terrifying) things. "I've, uh, ridden a bike," I stuttered to them.

As I hopped onto the snowmobile and started down the trail behind Jason, I immediately felt unsteady, like my body was going to be flung off into a snowbank at any moment. I could feel the vibration of the ride in my arms, and even my core, too. I couldn't help but notice how responsive the vehicle was to the weight distribution of my body.

When we stopped to check in with one another, I asked Jason how to best make turns, because to me, it felt extremely difficult to control the snowmobile around the bends in the trail. With a confident smile, he told me to lean into the side of the turn, and to pick up speed whenever I felt like I might get stuck. "Don't be afraid of speed," he told me. Yeah, easier said than done, Jason.

He explained that the less tense you are, the better, and that you should allow your body to go with the flow of the snowmobile's movement.

I did my best to heed that advice, channeling that similar sense of "effortless" control that I often try to maintain when I'm doing yoga, or when I'm dancing.

Later on, Jason stopped me and the rest of our group to tell us he was going to cut us loose for a while to play. Like a responsible chaperone, he gave us parameters to stay inside of so he could still see us.

It was during this "playtime" that I started really get the hang of the sport, and actually have fun. I was finally beginning to understand how to use my weight distribution to guide my turns and ease the tension in my body.

I even mustered the courage to stand up on the snowmobile a few times as I was riding, like a real freaking champ. It felt equally as exciting as it did meditative, and even when I stopped to break, my heart rate continued to go wild. I noticed the muscles in my entire body felt challenged, though not necessarily in pain or overly fatigued.

Having said that, I wasn't surprised at all to learn later on about some of the physical benefits of this winter sport. A study from York University, for example, showed that there are definitely health benefits associated with motorized sports, which in fact meet all the "metabolic demands" and "muscular strength requirements" of aerobic exercise.

And when I get a chance to talk to another Scenic Safaris guide, Dave Kanaus, in an exclusive interview with Elite Daily, he points out that snowmobiling is, indeed, a full-body exercise that works your core, shoulders, and legs, in particular. Kanaus adds that there are other benefits of the activity, one of them simply being that people usually have such a good time doing it.

"For many, it’s a real stress relief to be outdoors in the winter. And with snowmobiling, when you're off trailing, there's the excitement of exploring something you can't walk to."

Part of what makes snowmobiling a unique experience in the mountains, he explains, is that you're able to get to places you can't even get to while you're skiing. It's nothing short of enlivening, he tells me.

Plus, getting out in the seriously fresh air and sunlight can't hurt the mind or the body, amirite?

Do I look happier post-snowmobiling to you? I think so.

When I reconvened with my group later that afternoon at our very, very cozy hotel, needless to say, I could barely keep my eyes open for our evening activities. My arms were pretty damn sore, too, though I was definitely not the only one in the group who felt that way.

So, yes, going snowmobiling proved to be the best workout I've had in a while. But it wasn't just that; this experience was the most fun I've had in a long, long time — like, I feel-like-a-kid-again level of fun. Despite my initial anxiety going into it, I'm already daydreaming of my next opportunity to get back on a snowmobile.