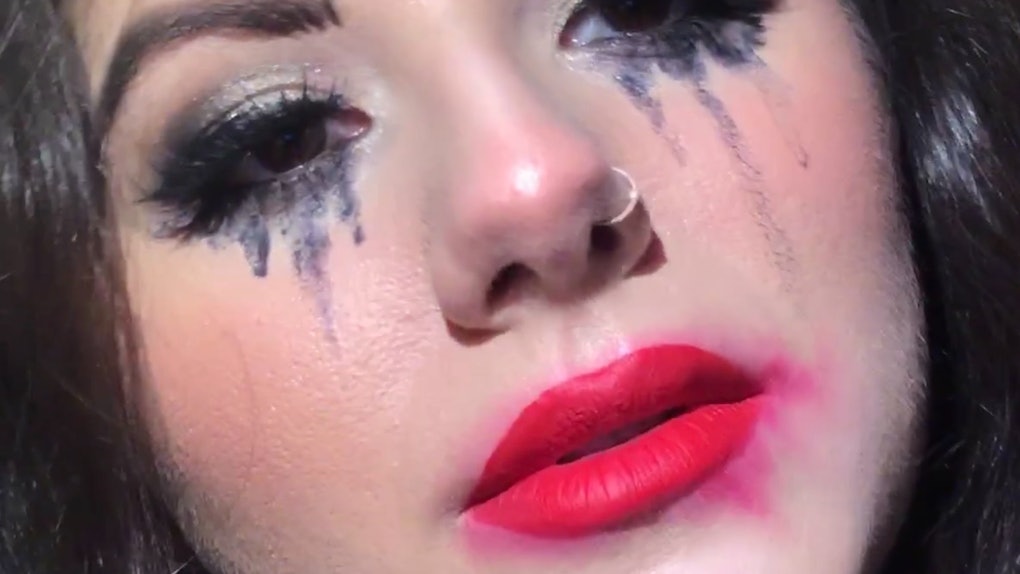 Is Smudged Mascara Post-Sex Hideous? I Investigated & The Reactions Are Shocking

It's fascinating how much most cis straight men don't understand about makeup. I don't care if I look like a raccoon post hookup. TBH, I think it's kinda badass. However, I've found that the men I've dated don't feel the same way. Is smudged mascara post-sex hideous to males? Do we really care what they think, anyways? Stay tuned for answers during this deep dive into the societally-dictated masculine psyche and the dozens of humorous stories we makeup-wearers have to share.

When I was a teenager, I was super aware of my post make-out smudged makeup face. I used to bring a caboodle full of makeup (not joking) to my high school boyfriend's house to hide the evidence of what had occurred (mostly from his family, but still). Now, I couldn't care less what my dates think about my post-hookup face. I personally find it sexy and rock n' roll to sport smeared mascara. However, it's worth noting that not every guy I've dated has felt the same way.

Most recently, the guy I've been seeing made an offhand comment on my smeared mascara in a way that I'm sure meant nothing to him, but made me boil like a pot of ramen deep inside for a fleeting moment. Said guy, who is normally supportive and charming when it comes to all my makeup endeavors, pointed out my smudged mascara after I accidentally on-purpose slept in my makeup. "Your undereyes look dark," he said. "I think it's your mascara." Now kudos to him for knowing what mascara is, but also... don't point this out to me, dude. I'm totally aware of it already, thankyouverymuch.

My editor had a similar experience with a guy she's been snogging. Like the seasoned beauty editor that she is (and quite unlike my irresponsible self), she washed her face before going to bed, but failed to remove all of her mascara. As we all know, this happens frequently to the best of us. Upon seeing the remainder of her smudged mascara, her date said, "Isn't it bad to sleep in your makeup?"

This response seems... a little kinder. After all, he wanted to make sure that her skin and eyes were safe from the damages of sleeping in makeup! Then again, it was the teeniest, tiny bit of mascara... so why not just let her snooze in peace without any hint of makeup mansplaining?

This made me wonder: do guys truly think your post-sex raccoon makeup is hideous? If so, why? It's literally just makeup.

Like the proper makeup Nancy Drew that I am, I decided to reach out to my closest friends to see if they had any insightful smudged mascara experiences to share.

Some friends said they've never had mascara smudge post-coitus, to which I asked, WTF magical mascara are you using and can you send some my way? Some have never received negative comments because they're sure the guys don't even notice:

However, the majority of the responses my friends have received from their past partners seem to be negative, questionable, or completely confusing at best:

Generally, the makeup wearers themselves love the look of post-sex smeared mascara. The words "sexy," and "punk rock" were thrown about with reckless abandon. Some of my friends simply joke about their "panda" and "raccoon" eyes when they feel like the look is a little... extreme. A particularly empathetic friend noted that she's less concerned with how she looks, and more concerned with not getting it all over her partner's face, which is understandable. Been there, done that, practically wrote the transfer-proof makeup novel.

A couple responses did shake me to my very core. Those that didn't have negative responses to share generally said guys don't simply notice. However, three of my good friends noted that their partners actually love (and kinda prefer) the smeared, post-sex messiness:

Out of all of the generously-offered replies, this kind of response makes the most logical sense to me. Why don't more men appreciate the tangible evidence of the sex that has occurred? Can't be sure. Guys are hard to understand 99 percent of the time.

Speaking of, I did asked a couple my cis straight guy friends to weigh in on the subject, and they said the following:

I don't know if I'll ever quite grasp the reasoning behind the width and breadth of the mascara smudging responses, but just know, you're not alone in your post-coital raccoon eyes. Proudly sport them however you want to and don't give an eff what your date says. At the end of the day, I'm sure these guys much rather be having the intimate time with you than not, smudged mascara and all.