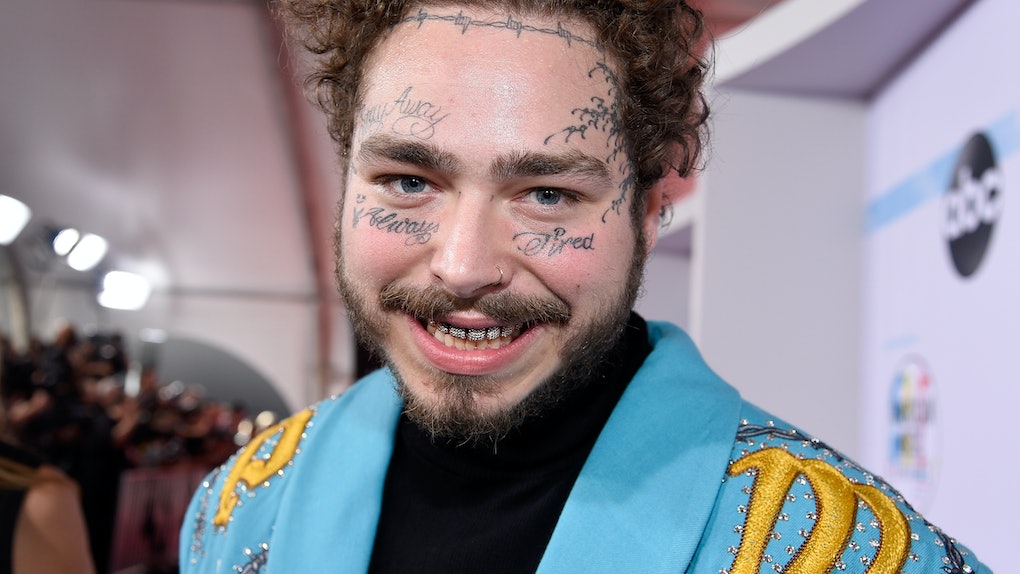 Is Post Malone Single? Here's What We Know About The Singer's Love Life

Are sweet, gravelly, emotional singing voices and face tattoos your thing? If so, there's probably just one thing you really want to know: Is Post Malone single? I mean, I know he was recently linked to longterm girlfriend Ashlen Diaz, but according to Us Weekly, the couple ended their three-year relationship sometime in Fall 2018. Elite Daily reached out to Post Malone's rep for confirmation, but did not hear back by the time of publication.

While one source told Us Weekly that the split was mutual, another said that it was reportedly Diaz who broke up with Malone. But we may never know the truth since neither one has ever publicly commented on the reported breakup. And even though Diaz deleted all the posts that featured Malone from her Instagram feed, there's always the chance that they got back together, since the two have had their ups and downs before.

In a 2016 interview on The Breakfast Club, Malone even admitted that he and Diaz had broken up and gotten back together in the past.

"It’s tough having a balance, between dedicating my life to music and dedicating time for Ashlen," he said at the time. "It’s tough because you want to get into the studio, you want to do as good music as you can, sometimes you’re real busy."

I mean, his reasoning does kind of make sense, you know?

Meanwhile, news of his breakup with Diaz came hot on the heels of Rita Ora's epic Halloween costume — you know, the one where she basically slayed the entire holiday by dressing up as the "Sunflower" singer?

I mean... have you ever seen anything more on point? She legit looks exactly like him, you guys!

Now, check out what Ora wrote in the caption of another picture she shared on Instagram — another Post post, if you will — that showcased her amazing costume:

Ima get Halloween started for you the right way... postttyyyyyy I LOVE YOU BRO @postmalone...ratatatatataata wassssss gooood!!

Um, she said I LOVE YOU BRO. So are these two dating? I'm gonna go ahead and say probably not, since Ora is reportedly hot and heavy with Spider-Man star Andrew Garfield.

Also, let's not forget that just a few weeks after Halloween, TMZ spotted Malone holding hands with a mystery babe while walking through George Bush Intercontinental Airport in Houston who may or may not have been the same girl he was caught canoodling with on a yacht back in August. But either way, we haven't seen these two together since. Which means Malone is probs still having fun as a single-and-ready-to-mingle man.

So where does that leave us? Pretty much back to square one, I guess. It just begs the question: If Malone is currently single, who's he gonna bring as his plus-one to Justin Bieber and Hailey Baldwin's wedding? Or to the 61st Grammys, where he's nominated for four awards, including Record of the Year and Album of the Year, and is also set to perform?

Here's a suggestion for ya, Post: How about one of your biggest fans — Madonna?

More like this
Lizzo's TikTok About DMing Chris Evans On Instagram Is Truly Hilarious
By Abby Monteil
Here's What Harry & William Said To Each Other At Prince Philip's Funeral, According To Lip Readers
By Brandy Robidoux
Gottmik Has Already Made 'RuPaul’s Drag Race' History, Win Or Lose — EXCLUSIVE
By Jonathan Borge
Stay up to date