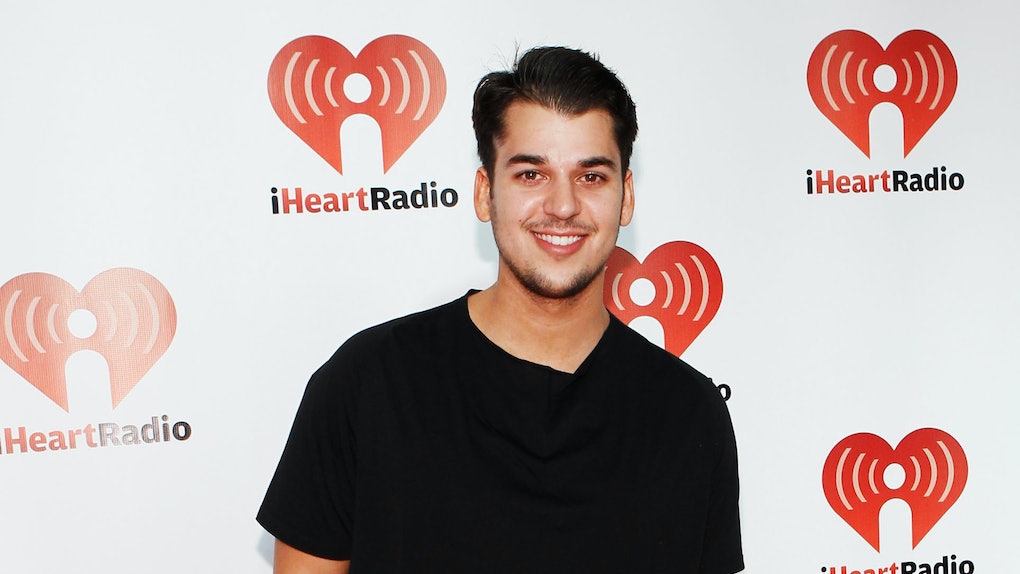 Very important announcement: Rob Kardashian emerged from seclusion (!!!) and shared a really adorable moment with his 2-year-old daughter, Dream. In a post uploaded to Twitter, Dream is seen grinning from ear-to-ear, wearing some high-end threads and the resemblance to her father is real. Seriously, Rob Kardashian's photo of Dream on Twitter has everyone pointing out just how much his mini-me looks like him.

Although he rarely shares photos to social media these days, on Friday, Jan. 18, Kardashian shared a new photo of Dream, whom he shares with ex-fianceé Blac Chyna, to Twitter. Wearing a cream-colored Gucci tracksuit with matching shoes and a fur coat, per People, the 2-year-old appears to point at the camera, smiling. From her rosy cheeks and squinted eyes to her lavish outfit and jet black hair, everything about the photo spells Rob — and he knows it. The Arthur George founder captioned the post, "Bling blaww burr," decorated with a bunch of emojis, in typical Rob Kardashian fashion.

Get a load of this cuteness:

Told ya so. And Twitter is eating it up. Fans couldn't help but point out how little Dream is the cutest Rob "mini-me" ever.

Kardashian has apparently been MIA because he's been all about his baby girl, who was born on Nov. 10, 2016. "His biggest joy is being a dad to Dream," a source close to the Keeping Up with the Kardashians star previously told People. "The whole family just adores her."

He's also reportedly got a new girlfriend, Love & Hip Hop star Alexis Skyy, who Kardashian said he's known for five years. Elite Daily reached out to representatives for Kardashian for further comment on or confirmation of the reported romance, but did not hear back by the time of publication. While it's unclear how long the pair have been dating, Skyy made him dinner on Jan. 14 in what appears to be Kris Jenner's home (and that's serious stuff). She also dropped the "L" word already, so... yeah.

Perhaps we'll get more insight on what Kardashian has been up to in the next season of KUWTK. According to his big sis, Kim Kardashian West, the 31-year-old will be returning to the hit E! series for Season 16, set to air later this year. "I think he is going to be a little bit more in the next season," the KKW Beauty mogul said of her brother on Watch What Happens Live With Andy Cohen on Monday, January 14. “He has his moods. Sometimes he’s like, 'Look, I didn’t sign up for this,' and then sometimes he’s like, 'I’m cool to do it.'" Elite Daily reached out to Kardashian's representation regarding his possible appearance on Season 16 of KUWTK, but did not hear back at the time of publication.

According to Us Weekly, Kardashian skipped the most recent season, Season 15, altogether, and he only appeared in two episodes of Season 14. In 2016, he and Chyna starred in a self-titled spin-off, but the show was canceled when their relationship ended, and the ex-lovers have been caught up in legal entanglements practically ever since. According to People, the pair reportedly don't even speak anymore. Elite Daily reached out to Kardashian's representation for comment on his current relationship with Blac Chyna, but did not hear back at the time of publication.

So clearly, we've got a lot of catching up to do whenever the show does air. Let's cross our fingers and hope that Kardashian keeps sharing photos in the meantime to tide fans over.