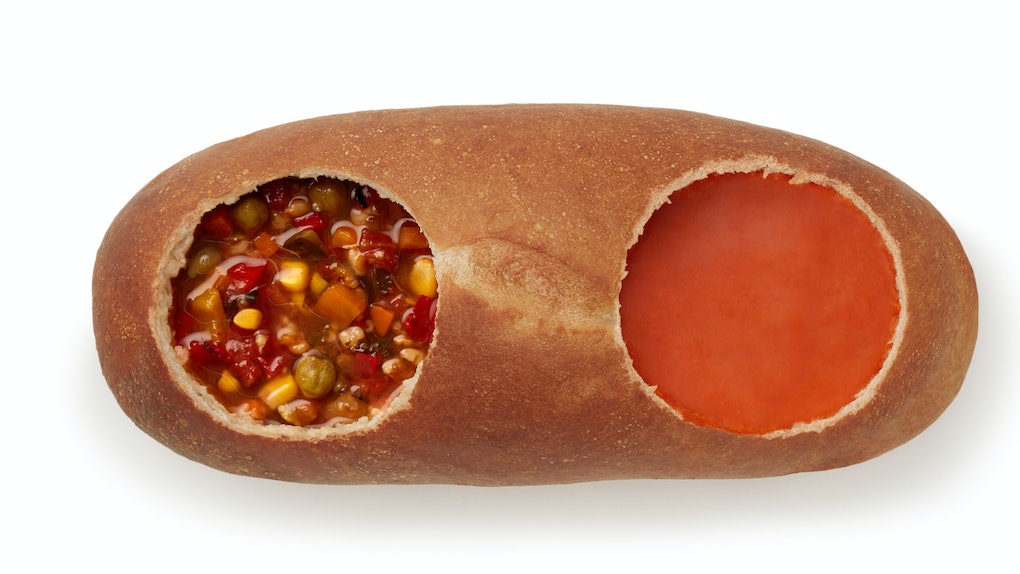 I love soup more than anything in the world (OK maybe that's a slight exaggeration, but soup is pretty flippin' good). Anyway, keeping my soup obsession in mind, you could probably imagine that a bread bowl is basically my vice. For real — they are one of the greatest inventions known to humankind. And if your soup obsession is going strong, you might be wondering if Panera's Double Bread Bowl is available near you. Well, you're in luck, because their famous Double Bread Bowl is about to be more widely available than ever.

To each and every one of my fellow soup lovers and carbohydrate enthusiasts: I have wonderful news. Starting Feb. 14, Panera will be offering their famous Double Bread Bowl at restaurants nationwide, according to a press release. That's right — whether you're living in New York, doing business in Arkansas, or if you're on a romantic Hawaiian vacation, your local Panera will be stocked with Double Bread Bowls for double the amount of soup (which obviously means double the fun). This comes just in time for the most romantic day of the year, so if you were in need of a last minute Valentine's Day idea, sharing a Double Bread Bowl really doesn't sound too shabby (right?).

My oh my, have you seen anything more romantic in your whole life?

The only downside of this glorious innovation is the fact that Double Bread Bowls will only be around for a limited time. Yes, you heard that correctly — according to a press release, you and your boo (or just you, alone — no judgement there) will only be able to get your hands on a Panera Double Bread Bowl through Feb. 28, or while supplies last at each participating cafe. They start at $9.99 in stores, online, and through the app via Rapid Pickup or delivery (if your nearest Panera happens to offer delivery, that is).

In the press release, Tom Sadler, Panera’s Vice President of Food & Beverage Product Development, said there's been a ton of buzz circulating the Double Bread Bowl since its test launch in August. So, it goes without saying that they're beyond excited it's about to be more widely available.

In the press release, Sadler said:

Since the test launch, we’ve seen an overwhelming response on social media from fans asking, ‘When will Double Bread Bowls come to my city?’ We’re excited to answer that demand and spread the bread to guests nationwide.

Double Bread Bowls are the greatest way to warm up, fill up, or catch up with your boo in the coziest way possible. It goes without saying I'll be treating myself to several of these... and if my boyfriend wants to get in on one with me, I guess that's fine too.