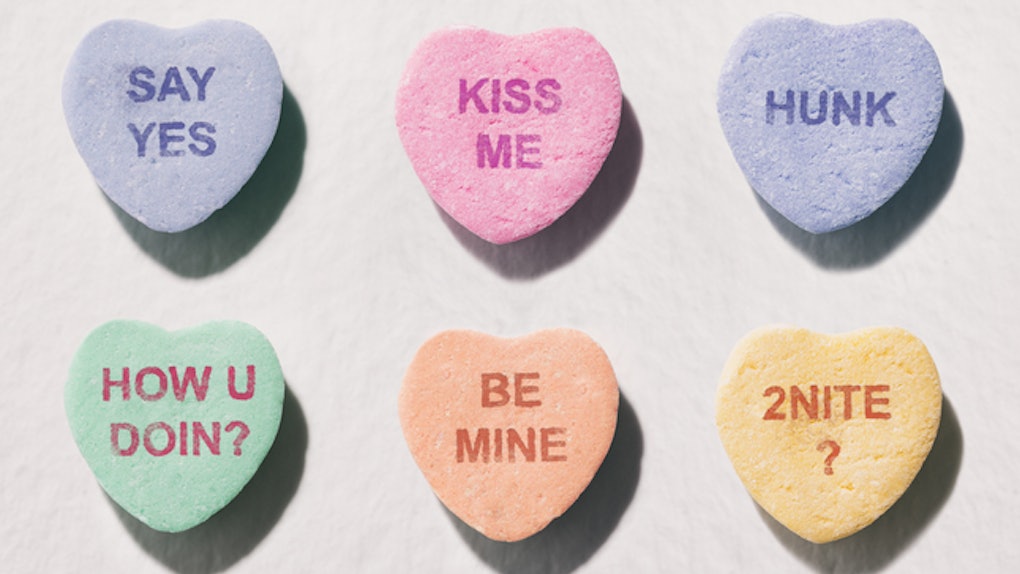 Is Necco Going Out Of Business? The Candy Company Might Undergo Huge Layoffs

Ah, candy hearts. Even though they don't really taste like much of anything except for sugar, sugar, and — wait for it — more sugar, they're total classics. And honestly, candy hearts are way more candid about love and romance than I could ever hope to be. However, the company behind the candies might be laying off a majority of its staff — and now, you're probably asking if Necco is going out of business. It isn't shutting down yet, but I still feel like my real heart is shattering into tiny little sugary pieces. I will buy truckloads of candy hearts just to save the company, because in the passionate words of Meatloaf, "I'd do anything for love."

Sometimes romance can be a little tricky, but sayings like "CRAZY 4 U" and "LET'S KISS" make things really, really simple. Candy hearts — also known as Sweethearts — always come in clutch to help lovers say how they really feel... and if things don't work out, at least candy is there waiting for them. According to The Boston Globe, the parent company for those beloved candy hearts, which is known as Necco, might face some serious layoffs.

On March 6, Necco's chief executive, Michael McGee, reportedly gave Revere Mayor Brian M. Arrigo and the state an alarming notice. Apparently, it said that if the company doesn't find a buyer, like, ASAP, they'd have to layoff 395 employees. That is the majority of their team, per The Boston Globe. IDK about you, but I am stocking up on them as we speak, because... you know. If they go under, how will I send that V-Day love?

Unfortunately, employees that could face layoffs are the brains behind it all. According to The Boston Globe, those who could get fired include the cooks, hard candy makers, truck operators, machine operators, attendants, and administrative positions, as well as the chief financial officer and chief executive.

This might come as somewhat of a surprise, but Sweethearts aren't Necco's only beloved creations. According to the famous candy brand's website, they're also known for producing those hella sticky Mary Jane candies that always got stuck in your teeth, Candy Buttons (which were really fun to gnaw off of the paper they came attached to), and those chalky, dusty Necco Wafers that I never really liked eating, but still ate them for whatever reason. They were also the innovative geniuses that created Mighty Malts, and in my opinion, those are the most divine out of all of their innovations.

Per The Boston Globe, the notice stated that Necco has some potential buyers, but if a sale is incomplete — or if the company does end up opting for layoffs — employees could be fired as soon as 60 days from when the notice was officially released. The disappointment is so real, guys.

And if you're sort of feeling like your childhood has literally crumbled under the weight of Necco's potential shutdown, just wait... there's more.

I'm not trying to add insult to injury, but on March 15, top toy destination, Toys "R" Us, also reportedly filed some extremely disappointing court documents. According to CNN Money, the company said they'll either have to shut down the business or sell each of their 735 stores after a tough holiday season. With major competitors like Walmart, Target, and Amazon, they didn't stand a chance. Per CNN Money, they initially filed for bankruptcy in September 2017, and it looks like they are having trouble making a comeback.

Memories of running away from my mom to sample each and every Barbie Dream House, squeeze every giant stuffed animal, and test out the Socker Boppers are currently flooding through my mind — and salty feelings of forgetting to replace my Roller Coaster Tycoon computer game are devastating. IDK about you, but my '90s kid heart has literally shattered into a million little Hit Clip-sized pieces.

Man, this is a super tough week. First Necco announces major possible layoffs, and then Toys "R" Us announces their plans to shut down. What else is next to crush each and every one of my '90s dreams and passions? Oh, right, Claire's has reportedly filed for bankruptcy as well, but I'm really rooting for them to make a comeback like, ASAP. Nowhere else is actually going to sell those spiky looking rubber ball earrings, so they're definitely a one-of-a-kind destination. I really have high hopes for Necco and Claire's, though, because nothing is finalized yet... TBH, maybe I'll just buy both of them.