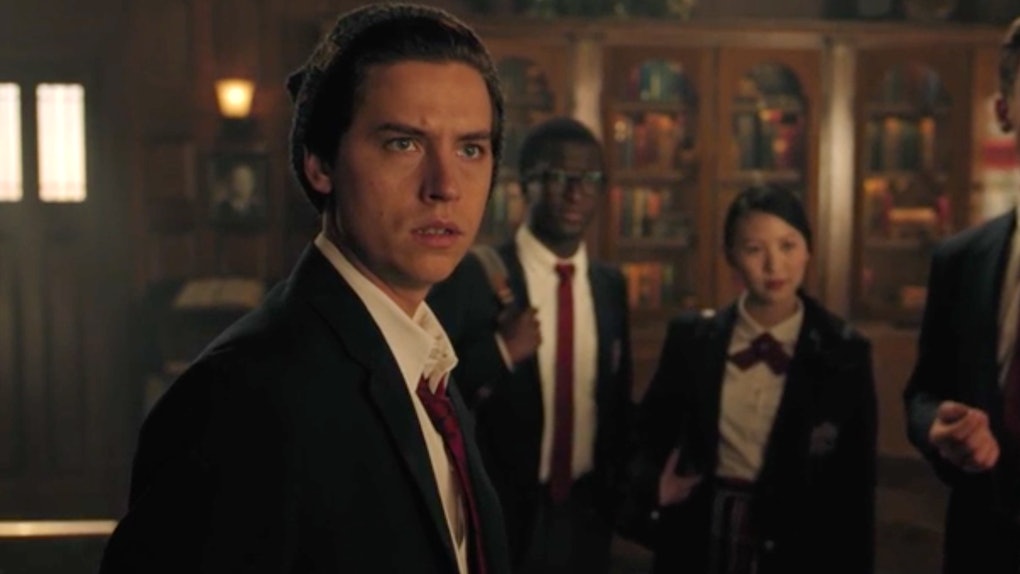 Is Mr. Chipping Dead On 'Riverdale'? Jughead's New School Is So Creepy

The current season of Riverdale has been a doozy so far for Jughead, and the latest episode added even more creepiness to his storyline. After Jughead looked into a dark secret tied to the founding of his new school Stonewall Prep, what he learned seemed to have led to a totally unexpected (possible) death. Spoiler alert: This post contains spoilers from Riverdale Season 4, Episode 6, "Hereditary." The cliffhanger at the end of the episode left fans with so many questions: Is Mr. Chipping dead on Riverdale? Or did he survive his fall? And what caused him to jump out of that window in the first place? Let's try to unpack what could really be going on at Stonewall Prep.

After being shrouded in mystery for the first several episodes of Season 4, Stonewall Prep's secrets are finally starting to be revealed. Jughead was able to prove his grandpa, Forsythe Jones I, was actually the true author of the first Baxter Brothers novel, but Mr. DuPont took the credit for it. According to Mr. DuPont, Stonewall Prep was built on the Baxter Brothers series, so the original author is also tied to the founding of the school. That's why DuPont is held up in such high regard at the school, even though Jughead's grandpa should really be the one getting all the praise.

It seemed like a simple case of plagiarism at first, but at the end of the episode, DuPont's real influence over the goings-on at Stonewall Prep became frighteningly clear. When Jughead asked his teacher Mr. Chipping to help him expose the truth about the first Baxter Brothers book, Chipping agreed, only to hurl himself out of a window at the beginning of his next class.

With Chipping M.I.A., DuPont stepped in to become Jughead's new professor, plainly suggesting he was somehow behind Chipping's sudden defenestration. What's less clear is Chipping's fate. Since viewers were not given any confirmation that Chipping died from the fall, along with the fact that nobody (besides Jughead) seemed too shaken about it afterward, it seems possible that Chipping survived and may return to be an ally for Jughead later in the season.

The bigger question, though, is why Chipping would do this. Apparently, crashing through a window felt like a better decision to him than going up against DuPont, which speaks to just how much power DuPont must have over everyone at Stonewall Prep. DuPont also laid out his long-standing grudge against the Jones family, ranting about how F.P. is a thief and a vagabond; Dupont also suggested he may have been behind Forsyth I getting kicked out of Stonewall.

All of this leads into the main mystery of Season 4: Who killed Jughead Jones? Flash-forwards from throughout the season have shown Jughead's dead body, as well as Betty, Archie, and Veronica getting arrested for the murder. Most fans have deduced that Stonewall Prep will play a major part in this mystery, since it is the center of Jughead's story this season. Now that Mr. DuPont has declared his hatred for Jughead as well as his power over everything at the school, he has definitely become the main suspect behind Jughead's impending death — or faked death, if you believe the theories. Now fans just have to wait to see how it will all go down.

Riverdale airs at 8 p.m. ET Wednesdays on The CW.

More like this
These Fake 'Riverdale' Brand Names Are Even Better Than The Real Thing
By Rachel Varina
Disney+'s 'High School Musical' Series Season 2: Release Date, Trailer, Cast, & More
By Ani Bundel
Is 'Cruel Summer' Based On A True Story? Here's What To Know
By Rachel Varina
Stay up to date