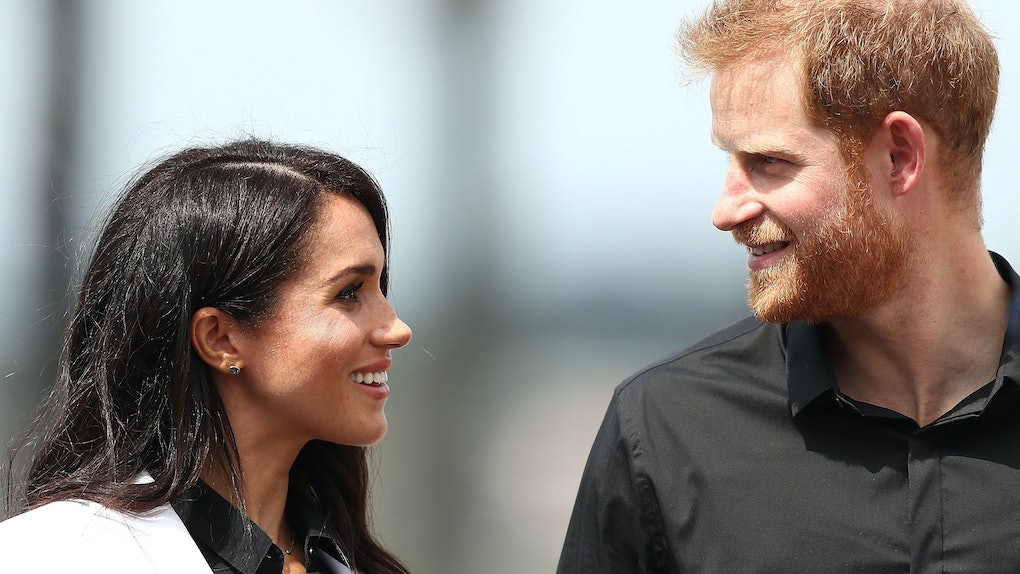 Is Meghan Markle's Eternity Ring A Push Present? People On Twitter Have A Theory

At this point, I'm sure you're aware that Meghan Markle and Prince Harry have welcomed their first child (and if not, where have you been?!). After spending a few weeks away from the spotlight, Markle made her first public post-birth appearance on Saturday, June 8, sporting a jewel that had fans guessing. So, is Meghan Markle's eternity ring a push present? Prince Harry certainly didn't disappoint if it is.

For now, though, there's no official confirmation on whether the ring is a push present. Elite Daily reached out to Kensington Palace for comment on the subject, but did not hear back by the time of publication. But there are clues that it could be. According to Yahoo News, Markle wore the ring alongside her engagement and wedding rings, which seemingly suggests that it has some sort of significant value. Mix that in with the fact that she wore it for her first public appearance following the birth of her and Harry's son, Archie, and it seems pret-ty likely.

Fans are more than convinced that the sparkler was given to Markle from her hubby. (You can get a peek at the jewel here.)

“I can’t wait to have better pictures of Meghan’s eternity ring. I think it’s definitely Harry’s push present for his wife!" one person tweeted.

Another wrote, "I'm thinking this is her push present."

Man, most new moms probably expect a bouquet of flowers or a bunch of balloons after giving birth, but it looks like Markle has really lucked out this time around. Seriously — what better way to show your everlasting love for your spouse and co-parent than with an eternity ring? I can't get over how cute that is.

It also stands out because it comes at an apparent tough time for Markle. The former Suits actress has been the subject of tabloid drama since becoming a royal in May 2018, fielding criticism on everything from her social media posts to her shopping habits. But she's also had several people come to her defense, like BFF Priyanka Chopra, who said in a June 2 interview:

I’ve seen that and it’s really unfortunate. But if there’s anyone who can handle it, it’s her. ... The beauty of Meg is that she’s been herself through all of this. A lot of people got to know her after everything, but I knew her before [she started dating Prince Harry] and she’s the same chick.

Actor George Clooney, who is close friends with Markle and Harry, also addressed the backlash in March, saying, “It’s a little unfair at times ... I’ve seen it when the press can turn on you for sort of ridiculous reasons and for almost nothing, and it seemed to me to be a little unjust since [Markle] hadn’t done anything except just happen to live her life."

She's a grown up and knows how to handle [the press] so I think she's absolutely fine. She's not a complainer, she takes everything in stride. They're a really good couple, they're really nice and they're really fun.

With such a gorgeous family and that stunning ring, perhaps Markle isn't even worried about the naysayers. I definitely wouldn't.