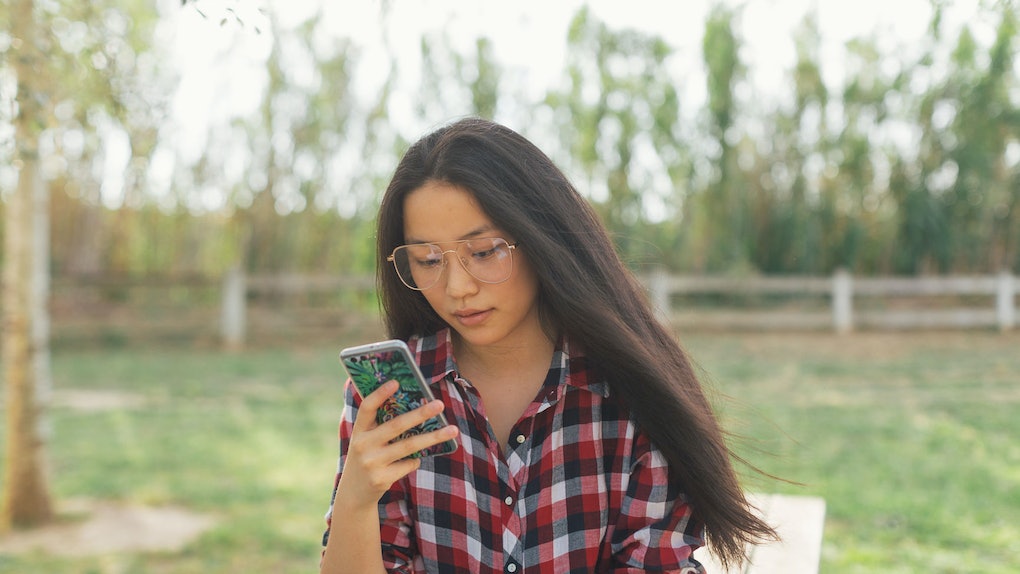 If Your Ex Still Follows You On Instagram, Here's What That Means

Instagram and breakups: They don’t mix, folks. When you go through a split, you’re inevitably faced with all kinds of bizarre questions — like, should you delete pics of you and your ex together? Who’s that new chick they’re already posting photos with? Should you unfollow them or risk prolonging the heartbreak? Oh, and of course, the mother of all questions: What does it mean if your ex still follows you on Instagram?

According to Susan Trombetti, matchmaker and CEO of Exclusive Matchmaking, it could indeed mean they're not over you, and because of those residual feelings, want to “keep tabs” on your life. However, it could also just that they forgot to unfollow you. Or, it could mean that they’re simply too proud to hit “unfollow.” Consider this: When I asked a girlfriend once why she still followed her ex given that seeing his occasional posts were clearly causing her some lingering pain, she said, “I can’t unfollow him, because he’ll see that — and then he’ll know that I still care.” It may seem ridiculous, but some people might feel like they maintain some sense of power by pretending that seeing what their ex is up to doesn’t bother them.

To determine why your particular ex is still following you, Trombetti advises asking yourself: What is the context of your current relationship with them? Are you still friends? Or did you end things on brutal terms? It’s a little more understandable for them to continue following you if they’ve stayed in your life in other ways, such as sending a congratulatory text on your graduation or supporting you by showing up to your art show.

It’s also to important to factor in their social media habits. If they rarely check Instagram, the reality is they may not even have noticed they never hit “unfollow.”

“It’s important to consider your ex’s personality and connect that to their actions,” adds Pricilla Martinez, CEO of Regroop Online Life Coaching.

However, if you know your ex makes it a habit to scroll through Instagram on the daily, then there may be a hidden reason why they’re still following you.

“Sometimes they do it as a way of validating their lives,” explains Trombetti. “They once cared for you so curiosity is normal. It's natural to look from afar even though they may not be commenting or even texting you.”

So, does this Insta follow mean they’re hoping you’ll get back together? If that’s the case, there will likely be other signs beyond just that, according to Trombetti. For example, you might hear from mutual friends that they’ve been asking about you, or they might reach out to you to see how you’ve been doing. Or at the very least, you’ll probably notice some likes or comments rolling in on those selfies.

As for how to handle the fact that they still follow you, that all depends on how you feel about it. If it bothers you, Martinez says it’s totally cool to straight up block them. Reaching out to text your ex about unfollowing you might open up a whole can of worms you don’t ultimately want to open.

“You don’t have to give anyone access to you,” she says.

If you’re secretly hoping to reunite, however, you shouldn’t rely on this one piece of information as proof that they feel the same way.

“Don’t make assumptions about what they’re thinking,” adds Martinez. “If you want to get back together, you may be seeing them following you as a display of affection. I’m a strong believer of communicating your feelings. Unless they have already clearly communicated they are not interested in you, you won’t know until you try.”

By the way — just because they’re still following you, doesn’t mean you have to do the same. Your feelings are most important here, so even if it doesn’t bug you that they still follow you, you need to honestly evaluate whether following them has been destructive to your ability to move on or painful in any way. On the other hand, if your former flame keeping tabs on your feed doesn’t make you uncomfortable but you’re also not hanging your hopes on getting back with them, then consider it a nice ego boost. It seems they still care enough to know what you’re up to. [Insert hair flip here.]

This article was originally published on Dec. 4, 2018