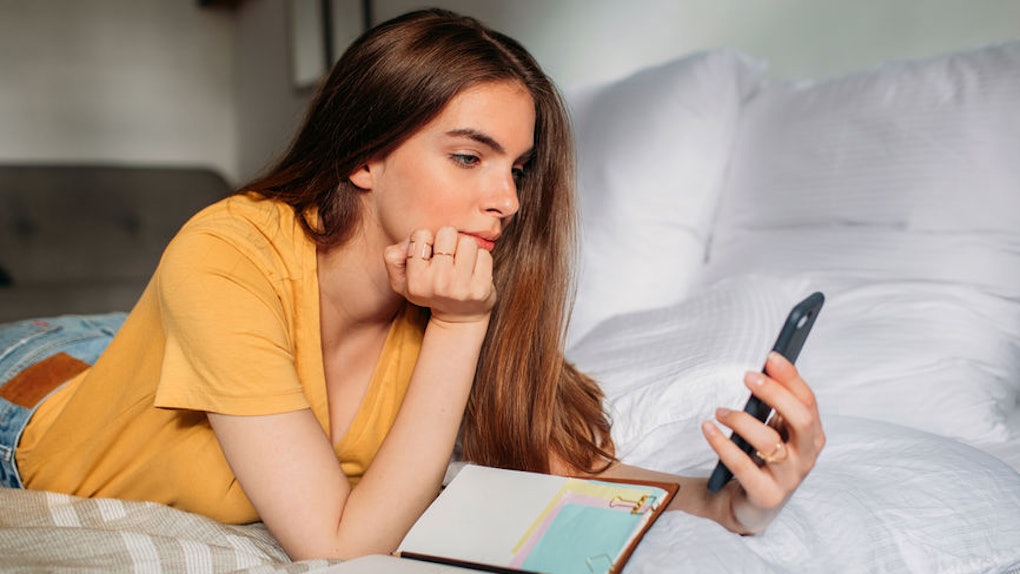 If You Want Your Crush To Text More Often, A Dating Coach Has Tips For Making That Happen

“Ding!” Is there any sweeter sound than your phone alerting you to a text from your crush? It gives you an instant rush that TBH, surpasses any thrill you could get from a rollercoaster ride. And if we’re being real, you’ll probably reread that text at least a dozen times — or perhaps even screenshot it and send it to your bestie for analysis. It’s safe to say that there’s no such thing as too many texts from your crush. Fortunately, if you want your crush to text more often, there are certain strategies you can use that may inspire them to respond faster, as well as initiate conversations more frequently.

According to online dating expert Julie Spira, one of the most effective things you can do is to give your crush a little positive reinforcement. It sounds simple, but it makes a lot of sense when you think about it, too. When someone shows you some appreciation for something, you’re far more likely to keep doing it, right?

“Thank your crush for sending or responding to your texts, and let them know how much you enjoy seeing their text pop up on your phone — mention that it puts a smile on your face,” says Spira. “Not everyone communicates the same way, but knowing your communication style is a great start to receiving more texts from your crush.” Of course, if straight-up texting, "Thank you for this message!" isn't your style, no pressure — maybe you opt for a flirty, "Hiiiiii there," or a coy message like, "I was wondering when I'd hear from you... ;)"

Offering up this positive feedback when your crush does reach out to you or respond to your digital advances will make them feel good, and in turn, probably make them want to text you even more.

Another tactic that Spira recommends is keeping your texts short — just one to four lines is the ideal length because it’s enough to keep the conversation rolling without overwhelming the object of your affection. But just to be clear, short doesn’t mean boring. Rather than firing off a typical “Hey, what’s up?” Spira suggests putting some thought into it and crafting a more meaningful message because they’ll be more likely to respond if you catch their attention.

“Share something exciting that happened in your day,” she adds. “If you got a promotion or a raise, let your crush know right away, and add a few exclamation points on how excited you are. If they care about you, they’ll share your enthusiasm.”

By the way, don’t underestimate the power of an emoji to take your texts up a notch. Spira notes that a simple wink or smirk emoji can take a basic message to a far more flirtatious level. And by laying on the flirtation, you’ll open the door for your crush to send you flirty texts in return, too.

It’s a good idea to take your crush’s schedule into account when texting them. For example, if you know they work nights, then they’re probably more likely to engage with you over text during the morning or afternoon. Or, if they take a lunch break around the same time every day, then that’s a good window to shoot them a text, too. Spira says in general, the morning is a great time to start a conversation.

“Sending a text before their busy work day starts will result in a greater chance of receiving a response,” she explains.

Another way in which you can make a phenomenal impression is by using little tidbits of info they’ve dropped as conversation starters. This does two things: It shows them that you care enough about them to listen to what they’ve said, and it also offers up an opportunity to bond on a deeper level.

“If you know they had an important presentation or meeting at work, send a quick text saying, ‘good luck on the presentation today’” says Spira. “Later in the day, follow up with a text along the lines of, “How did your meeting go? I bet you rocked it.'"

When all else fails, Spira advises asking a simple question to get to know them better. Keep in mind that a yes or no question may not be as effective — as a general rule, you’re better off asking them something that leads to a more in-depth discussion. For example, rather than texting, “Are you going to that party on Friday?” you might say, “I’m trying to decide if I should go to that party on Friday. What do you think?” And don't be afraid to ask the deep questions over text, either, because those have a good chance of sparking a longer conversation.

If you’re feeling a little anxious about texting your crush, know this: Those jitters are totally normal. In fact, they’re a good thing — because what your nerves are telling you is that you really like this person. The more invested you are, the more nervous you’ll feel. Luckily, Spira has some advice on how to help you keep your cool.

“Rather than agonizing on what and when to text your crush, write a text as if you were sending it to someone you know well, like a BFF, but with added flirtation,” she says. “Send it to yourself first, to see how it looks on your phone. If it looks too long, shorten it. If it looks too business-like, sweeten it up.”

As for what you shouldn’t do, Spira recommends resisting the urge to send too many texts in a row with no response. She also says to avoid putting any pressure on your crush to text you back or make plans.

“Communication is key in any relationship, whether digital, in person, or on the phone, but whining about not getting enough texts or starting to send multiple texts in a row with no response will backfire.”

And if all those tactics still don’t inspire them to send you more texts, try not to stress about it. According to Spira, they may simply not be big into texting — which is all the more reason to take your crush to the next level and ask them out. After all, hanging out IRL will give you a much clearer sense of whether you and your crush are actually compatible than texting will. And to boot, texts aren’t the only way that your crush can let you know they’re into you. While receiving a message from them will undoubtedly give you a little boost, they can also make you feel special in lots of other ways, like flirting in person, asking you to hang out, or even giving you an old-fashioned phone call (remember those?).