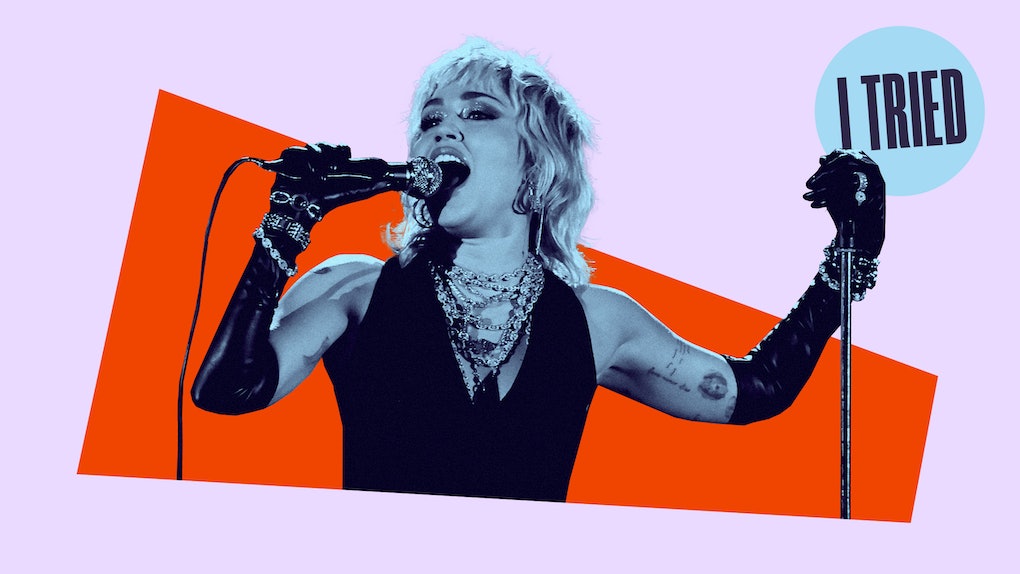 I Tried Singing While Running Like Miley Cyrus & OMG, My Lungs

Miley Cyrus is the queen of setting trends. The 28-year-old multi-hyphenate makes her own rules in all aspects of her life, including her style, her acting, and of course, with her award-winning vocal performances. Add to that list: her workouts. Recently, Cyrus showed fans the unconventional way she preps for physically demanding concerts, and since then, you've probably seen someone on social media singing while running, just like Miley Cyrus.

ICYMI, on Feb. 3, Cyrus posted an Instagram video of herself briskly walking while singing her song "Plastic Hearts" in preparation for her 2021 Super Bowl pre-show performance. She followed it up with another post on Feb. 4, in which she full-on ran and sang "Rebel Girl" by the band Bikini Kill. Despite doing some seriously intense cardio, Cyrus never missed a note in either video.

After Cyrus wowed fans with her ability to multitask, a handful of celebs decided to see if they, too, could sing while exercising. On Feb. 4, Lizzo posted a video of herself running while singing her song "Cuz I Love You." Then, on Feb. 12, Alicia Keys rode her Peloton bike while singing her hit number "Superwoman." Cyrus' trend got so much traction that Peloton turned it into a full-on social media challenge, which was of course dubbed the #MileyChallenge.

In the past, any challenge involving vigorous exercise would be a hard pass for me. Since the start of 2021, however, I've made wellness a priority in my life. I'm drinking more water, getting more sleep, and I aim to take 10,000 steps a day. So, when I came across Cyrus' videos and saw how powerful she looked, I had to see if I too possessed the superpower of being able to sing while running.

Despite not having been on a run in quite a few months, I was actually kind of excited to try the #MileyChallenge. Not only did I spend far too long curating the perfect "songs I love to belt" playlist, but I also found my ex's old leopard biker shorts and threw them on, so I was really feeling myself.

Since I don't own a treadmill, I had to run the old-fashioned way: outside. "How hard could it be to give an award-winning vocal performance while sprinting in the Florida heat?" I thought to myself.

After doing a few light stretches, I set out with my baseball cap, sunscreen, and glasses, my playlist already bumping jams in my AirPods.

To warm up both my vocals and my muscles, I decided to start with a brisk walk while singing, just like Cyrus did in her Feb. 4 video. My first song choice was Nancy Sinatra's "These Boots Are Made For Walking." Not only is it my go-to karaoke song, but also, after casually recording myself signing it about 70 times, I'm convinced my voice sounds somewhat listenable when I sing it.

By stepping to the beat of the song, I was able to time my breathing with my pace, and while my voice was a little more breathy than usual, it wasn't *that* bad. At least, not at first. As the song progressed and the heat started to catch up with me, I found myself skipping a word — and then a line — here and there to gasp for air.

When it came time to pick up the pace, I was already feeling a little winded. Breathing control is a huge part of singing (says the girl who had one solo in elementary school choir), and considering I had missed a few beats in my first number, I was worried about how things would go once I started running.

After jogging a few feet to get my stride, I cued up my next hit: "Party in the USA," a Cyrus classic. As the familiar tune started playing, I tried to concentrate on the lyrics as opposed to the fact that my lungs felt like they were on fire.

To say it went badly would be an understatement. With each step I tried to sputter out a word, but I quickly found that getting enough breath was nearly impossible while singing about butterflies and Britney Spears. Within minutes, I was lightheaded. By the time the song ended, I was just trying to stay upright, the lyrics long forgotten.

After a few more attempts at running and singing, it quickly became clear that this was not the activity for me. Each time, I could only get a few lines out before my voice turned into more of a hoarse screech, and that's if I even managed to get any sound out at all.

By the time I got back to my house, sweat was dripping down my back, my heart felt like it was going to beat out of my chest, and my head was pounding. After chugging about 64 ounces of water, I sat under the fan in my living room for 10 minutes and tried to catch my breath. According to my FitBit, I ran about 2 miles total — at 87 degrees and in 70% humidity, no less.

Physical exhaustion aside, once I got over the embarrassment that my neighbors heard me shriek/sing for 30 minutes, I actually felt pretty good about running a few miles in the middle of the day.

This challenge was hard. At first, I reasoned Cyrus had the benefit of training indoors, so she didn't have to deal with the heat when running. But then I remembered: Her Super Bowl performance was in Tampa, Florida — which is where I live — so she actually did have to sing and exert herself in the same climate I did. After groaning on my couch for an hour and taking some ibuprofen, I had to admit that while Cyrus made it look easy, singing while running was hands-down one of the hardest workouts I've ever tried.

I officially have a newfound respect for all performers, especially Cyrus. However, the next time I lace up my sneakers, I think I'll stick to just singing in my head. But hey, at least the people of Tampa got a few vocal performances they'll never forget.