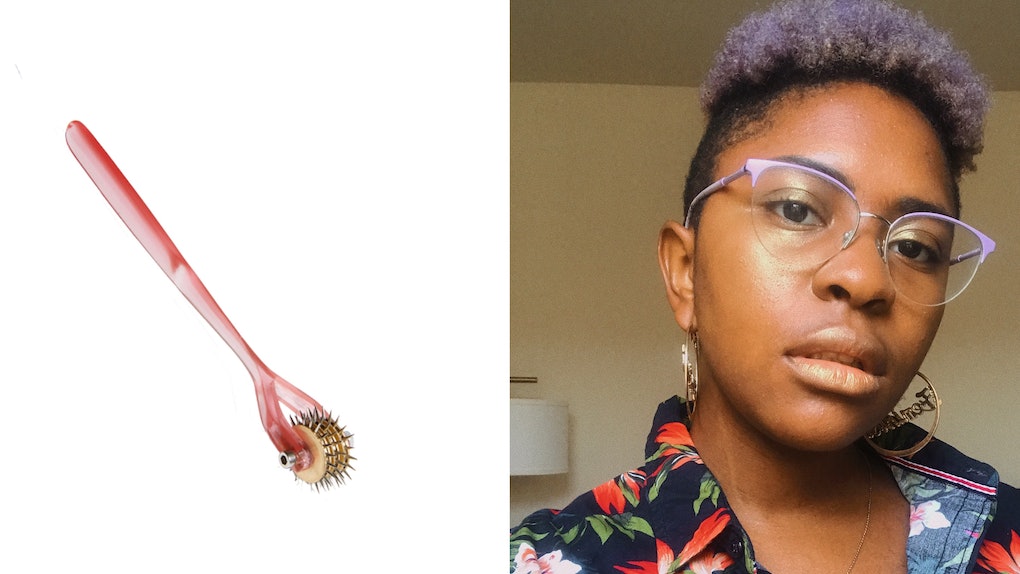 I Tried Sensation Play & Enjoyed Testing Out Something New In Bed

In recent times, I've gained a reputation in my social circle for having eclectic sexual tastes — if not for my kinks and desires, than for my openness about them. For anyone who knows me, it should come as no surprise that I tried sensation play and enjoyed testing out something new in bed. For those that don't know me, case in point: My best friend Danielle and I paid a visit to the Museum of Sex earlier this year. (Because where else in NYC do you go when you're a sex and dating writer and you love a good Instagram photo op?)

Like the exhibits themselves, the museum's gift shop is exactly what you'd expect. Yes, there are slogan T-shirts, embroidered caps, and cheeky underwear. But there are also sex toys bursting from every display table and shelf. Up front, you've got your standard-issue dildos and vibrators (and the flustered visitors who fiddled with the "on" button, but can't seem to turn them off). Then, there are the toys in the back. These are the ones that caused Danielle to wave me over saying, "Oh, Caroline, this is your section." My so-called section featured wooden paddles decorated with hearts, satin ropes for bondage, and some tried-and-true riding crops — yeah, sounds about right.

All these toys facilitate what is called "sensation play," which sexuality educator Janielle Bryan defines as "sexual arousal or pleasure due to sensory modification, either by increasing sensation or by depriving it." Ultimately, the goal is to heighten pleasure by honing on the senses in overlooked ways, Bryan says. As someone interested in kink, I had indulged in sensation play before. I've experimented with an ice cube, and have indulged in spanking sessions and the occasional blindfold. Still, I'm always game to try something new.

It's important to note: Consent during all sexual activity, especially BDSM-tinged activity, is crucial. Sex and relationships therapist Shamyra Howard, aka Sexologist Shamyra, says you should always have your partner's enthusiastic consent throughout your sex sessions. "Negotiate and agree on the expectations before engaging in play," Howard urges. "And never assume that your partner consents to playing with anything or anyone, just because there was initial consent." Bryan, who runs The Sex Exchange (a series of "shame-free, pleasure-centered" sexual wellness events in Philadelphia), adds, "Sometimes, exploring new stimuli can be more overwhelming or less pleasurable than anticipated." That is to say, you or your partner might feel stressed or anxious in the moment, and too overwhelmed to speak up. Take breaks throughout, so you can communicate and adjust accordingly.

Establishing a safe word, as well as a game plan for check-ins, mishaps, and aftercare (nurturing, post-BDSM, wind-down activities), can ensure everyone and everything is taken care of. My girlfriend and I have a pre-established safe word for stopping all sexual activity. We also use the "green light," "yellow light," and "red light" system to communicate "keep going," "slow down," or "stop and check in." After going over our safe words, aftercare plan, and sexpert guidance, my girlfriend and I blocked out some time to try the sex toys.

First, we tried out the Tsk toy, which has silicone tassels on one end and a patent leather paddle on the other. A whip or a paddle can pleasurable, Bryan says, because "by inflicting pain to a specific body part, it increases that area's blood flow and heightens sensitivity to touch." Bryan also adds that this gets endorphins flowing. Of course, when using a whip or paddle, it's critical that you avoid major organs like kidneys and your heart or your spine. "Stick to fleshier parts of the body," Bryan says. Inner and outer thighs, calves, and your butt are a great start.

Polly Rodriguez, the CEO of Unbound, told me the best way to use Tsk is to "start by teasing with the tassels and escalate to using the paddle." So, my girlfriend, Genna, used it on me in that order. I laid face down on the bed and she started by running the tassels up and down my calves, the backs of my thighs, my back, and my neck. And because I couldn't watch — and just had to feel the tassels when they danced across the most sensitive skin on my body — the process definitely upped the sensual anticipation.

After I was sufficiently teased, Genna graduated to whipping my thighs and butt with the tassels, which goes to show how versatile the toy is. The tassels definitely made my skin sting, but the pain kind of turned me on. The paddle, however, was a bit too mild for me. Even with force, Tsk's impact felt gentler than when I've been spanked by hand. Still, I can def recognize the value of that mildness, especially for couples who are just beginning their BDSM journey. And, an added bonus: My girlfriend said spanking me with Tsk was satisfying, mainly because of the rich clap sound the paddle makes on contact.

And like Bryan says, inflicting pain and getting that blood flowing increases your skin's sensitivity to touch. It felt absolutely wonderful when we finished the whipping and spanking, and my girlfriend gave me a sensual massage with some aromatherapeutic lotion.

Then came Spike, the pinwheel, which really piqued our interest. When I unboxed it a few days earlier, I couldn't help but run it along my arm out of curiosity. My girlfriend, amused, said, "At the end of the day, this is what you’re most into. This is just the textures of sex. And you’re all about textures when it comes to aesthetics. This is just the textures of touch, instead of sight.”

When I spoke to Rodriguez about Spike, she explained that the tool is originally called a "Wartenberg wheel" and was developed to test nerve endings. Unbound had a few iterations of pinwheels prior to Spike, but this one has a long handle so you can add more pressure while using it. Bryan recommended running it along erogenous zones such as the inner thighs, lower back, neck, and the soles of your partner's feet. "You can experiment with the speed, depth, and location on the body until you find what works," Bryan says. You can also experiment further with sensation play by popping your Wartenberg wheel in the freezer.

The Wartenberg wheel had an extremely pleasurable effect on me. Since the device was literally designed to stimulate your skin's nerve endings, it made my most sensitive areas feel electrified. I found some unexpected erogenous zones, like my shins (which are typically sensitive in the worst way) and the backs of my arms. If you and your partner have been kinky for awhile and are looking to try something very different, I would recommend Spike.

As Bryan points out, you don't have to invest in fancy equipment to participate in sensation play. Ice cubes, feathers, silk scarves, a scent you and your partner like, a safety pin, or even a tissue can spice up your next hookup session. Howard says a common form of temperature play/sensation play includes ice and (skin-safe) hot wax, "which, individually or coupled, provide an unforgettable sensory experience."

On the flip side, instead of engaging certain senses, Howard says sensory deprivation could be a fun approach to sex. "When used responsibly, sensory deprivation has been shown to have several benefits, such as decreased anxiety, [and] relaxation, and it can reduce stress," Howard explains. So, for example, blindfolding your partner and running an ice cube down their chest can be fun way to engage in sensation play. Or, you can put in ear plugs while your partner spanks you, to create what Howard calls "anticipation arousal."

Overall, I enjoyed trying new toys, especially in partnered sex. One wonderful aspect of sensation play is that it allows you to slow down and makes sex less orgasm-oriented. It also makes sense less penetration-oriented. Instead, you get to work on building sexual tension and you realize (or remember) that foreplay can be just as enjoyable as sex.

"It can super fun, but it can also be a really educational process as well since you’re learning what you like and might want to explore further," Rodriguez says. With a safe word, aftercare, your creativity, and some sensual items in hand, trying out sensation play is worth it if you want to give your sex life a little extra prickle or sting.