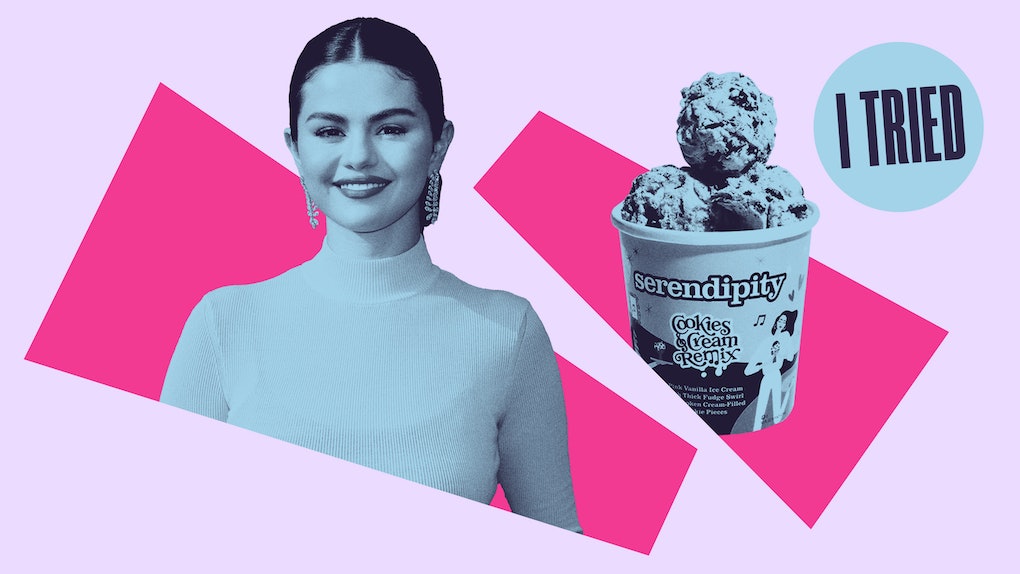 Selena Gomez fans received a treat in the summer of 2020 when the singer collaborated with K-pop group BLACKPINK on their hit single, "Ice Cream." Then, Gomez sweetened the deal (pun very much intended) when she announced she was developing a special ice cream flavor with gourmet dessert brand Serendipity in honor of the song collab. To promote her flavor, the Cookies and Cream Remix, Selena Gomez released her ice cream sundae recipe along with a cute video of herself making it (à la her Selena + Chef series) on Instagram. If you're a dessert lover *and* a Selenator like I am, you already know I had to try it out for myself.

Gomez's ice cream flavor is a unique tribute to BLACKPINK. "For the Cookies & Cream Remix, I wanted to put my own personal spin on this classic flavor by making it with pink vanilla ice cream as a nod to my girls BLACKPINK and celebrate our new song," she said in a press release about the ice cream in August 2020. In addition to the rosy hue, the ice cream also includes chocolate cookie bits and a fudge swirl, because the only thing better than pink ice cream is pink ice cream mixed with chocolate. And you can enjoy it anywhere, because the Cookies & Cream Remix is available to order online.

In her Instagram video detailing the sundae recipe, Gomez walked viewers through every step of her sundae-making process, from adding extra cookie crumbs to topping off her ice cream treat with a cherry.

The aesthetics of the pink ice cream and elaborate accoutrements was reason enough for me to want to make the sundae myself, and Gomez's reaction to tasting it at the end of her video only made me more excited. I don't typically make fancy sundaes at home (I'm more of an eat-it-from-the-pint gal), but I figured this was a great opportunity to treat myself, so that's exactly what I did.

Gomez's sundae recipe is pretty straightforward. All you need is a bowl, a handful of ingredients, and an ice cream scoop to get the job done. As an amateur desert connoisseur, I already had most of the ingredients in my kitchen, so that was a big bonus. I should also note that while having pink ice cream is great, if buying Gomez's specific Serendipity flavor isn't a practical option for you (or if you need to serve up a dairy-free or vegan option), any cookies and cream flavored replacement should do the trick.

Making the sundae was pretty easy. I cut my banana into chunks and warmed up a few scoops of hot fudge in the microwave for 30 seconds so it would be extra gooey. The ice cream ended up needing about 10 minutes to defrost after being in my freezer, but once it finally thawed, it was time to layer all the ingredients into my bowl. I started with my three scoops of ice cream, added some banana chunks, hot fudge, and a dollop of whipped cream, then sprinkled in some cookie bits (I went with chocolate chip, my favorite).

I also decided to add some pink, heart-shaped sprinkles, because they felt very on-brand with Gomez and BLACKPINK's pastel-filled "Ice Cream" music video. Then, I topped the whole thing off with a cherry.

The poor pink ice cream ultimately got buried by some of the ingredients and was a little less IG-worthy as a result, but ultimately, I was just excited to try it all together.

Let me start off by admitting I've never been a huge fan of bananas; food texture is important to me, and I don't like how slimy they can be. But while I was chowing down on this ice cream, I didn't mind their presence at all. Their mushiness gave the sundae a thicker, creamier consistency as a whole. Plus, along with the cherry, they gave this chocolate-filled dessert a nice pop of fruity freshness.

My favorite part of the sundae, though, was the gooey fudge and cookie bits that were both mixed into the ice cream and added to the recipe. Most cookies and cream flavors I've tried only have flecks of cookies in them, so I typically end up feeling like I should've just bought vanilla ice cream and sprinkled in cookie crumbs. This one was different. The sheer amount of stuff in the ice cream, plus the hot fudge and cookie bits I added to the sundae, had me in dessert heaven.

Simply put, Gomez's recipe was a hit. It was filled with the chocolate elements I crave in a dessert, and the additions of the banana and cherry made me feel like I was getting at least some nutrients along with all the sugary goodness.

All in all, I'm thankful to Gomez for sharing her sundae creation with the world. Even if I don't get this extra every time I get a sugar craving, the recipe reminded me that it's important to make yourself something special once in a while. As Gomez and BLACKPINK would say, "Baby, you deserve a treat."