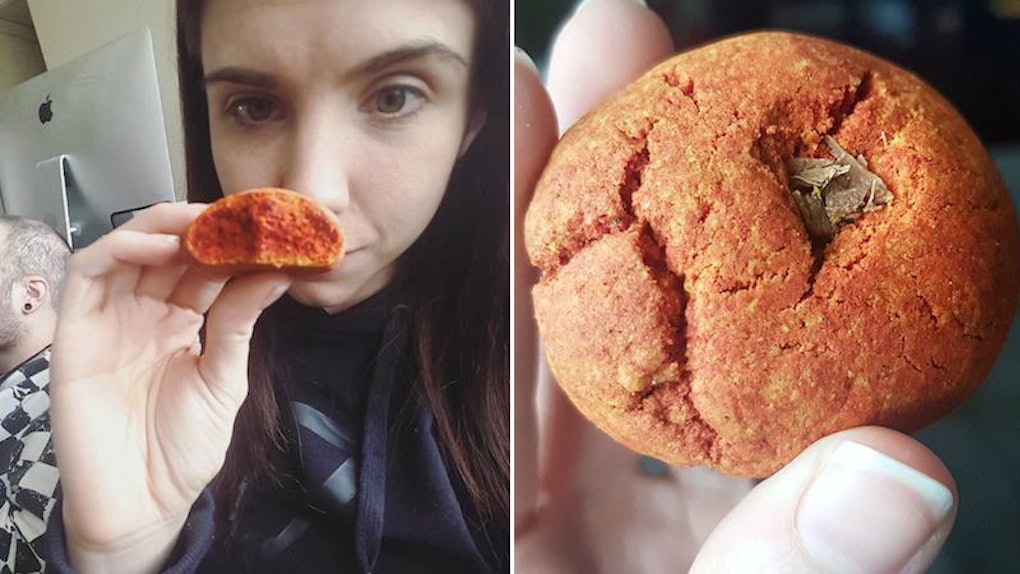 I must say, when it comes to PMS, my body’s been pretty lenient with me lately. Other than the occasional stomach cramp and a hint of fatigue, any physical discomfort I might endure usually starts the first day of my cycle, but as far as tell-tale signs of Mother Nature making an entrance, I can always count on ravenous cravings to begin a week or so before I bleed. In an attempt to reign myself in and fuel my body with treats that treat my body right, I tried Moon Cycle Bakery’s golden mylk cookie for PMS this time around, and I am thrilled to report it worked like a charm.

Let me just get something out of the way, here: I’m a small girl with a big appetite, no matter what day of the month it is. The problem isn’t that I’m eating sweets to curb my cravings; there’s absolutely nothing wrong with lazing on the couch spooning Ben & Jerry’s out of the carton if that’s what makes you feel better during your period. The problem is, what I’m craving (i.e. all the french fries) doesn’t usually help my body stay cool, calm, and collected. In fact, the greasy takeout and store-bought treats actually tend to intensify my symptoms, which shouldn't really come as a total shock, seeing as how fast food isn't exactly the most nutritious source of fuel.

Instead of grazing on chocolate treats in my fridge, I nibbled on MCB’s golden mylk ginger cookie to ward off cravings, and any other uncomfortable symptoms I was dealing with.

When I first got word that MCB was introducing a treat with turmeric and ginger as its key ingredients, my initial reaction wasn’t exactly what I’d call excited, but I was definitely intrigued. I’d just gotten accustomed to sprinkling my roasted veggies with the yellow spice, and the only ginger I regularly consume is the white stuff clumped in the corner of my sushi's to-go container. But how could two seasonings that are traditionally so savory be combined to make something sweet? There was only one way to find out.

Before I could take that first bite, I had to get the backstory on MCB founder Devon Porrino’s inspiration for such a vibrant addition to the dessert delivery service's shelves. In an exclusive interview with Elite Daily, Porrino says the idea behind the golden mylk cookie first came to fruition when she stumbled upon Live24K’s account on Instagram. Live24K, for those unfamiliar with the brand, was founded by trainer and nutritional coach Minna Lee. It's the company behind Golden Fuel, an exclusive, powdered blend of turmeric and collagen, inspired by traditional Ayurvedic golden milk that has been said to be good for treating inflammation and pain.

“I really appreciated the intention and care Minna put into creating a high-integrity product. There were no sugars or gums, and yet it was the perfect amount of sweet,” Porrino tells Elite Daily. “Our intern worked with Minna to create a recipe, and our golden-mylk cookie was born.”

Once I heard straight from the source that this sweet treat was actually sweet, my next question was, how would it help my period?

Well, for one thing, turmeric, while beautiful in color, is also very useful around a woman’s special time of the month. It’s highly anti-inflammatory, as well as antispasmodic, which makes it extremely helpful for women dealing with intense cramping during their periods.

Porrino also calls out ginger as a “huge period cheerleader,” because it reduces symptoms such as nausea, as well as cramps.

"Ginger contains carbohydrates, free fatty acids, amino acid, proteins, and gingerols, which have anti-inflammatory, antioxidant, and antiemetic (i.e. prevents an upset tummy) effects,” she explains. “The best reason ever to eat cookies, if you ask me.”

Another key component to this genius little treat is the fact that Live24K's blend is 100 percent sugar-free. This ensures that, when combined with honey and cinnamon, you get that sweet taste your body’s craving without the risk of overkill or an energy crash. Less fatigue, more satisfaction? I was sold.

I took my time savoring each bite of Moon Cycle Bakery's golden mylk ginger cookie, and I felt its soothing effects almost instantly.

The third day of my period is always a toss-up. It could be stress-free, with minimal to no pain. Other times, my cycle starts off smoothly, and by mid-menstruation, I’m battling a variety of ailments, like cramping, fatigue, and backaches. This time around, I was definitely dealing with some pain, so I got comfortable on my couch, settled on a Netflix series, and ate my cookie under a big, fluffy blanket, with a hopeful palate and an eager prayer that each bite would ease me to comfort. Truth be told, I was not disappointed.

The best way I can describe the treat is that it tasted like a subtle, spiced sugar cookie. Aesthetically speaking, it actually resembled my favorite, seasonal pumpkin bath bomb from Lush, and smelled heavenly. It was hands-down one of the best treats I’ve tasted from Moon Cycle Bakery, and by the time I was finished, I really did feel like my body was much more relaxed than before that initial bite. The combination of back and stomach pain even subsided enough that I was able to take a quick catnap before dinner that day.

If you're skeptical about whether or not a turmeric-ginger cookie could really be all that delectable, this is my personal testimony. The best advice I can offer is not to knock it before you try it, and definitely take that first bite when your period starts to act up. You'll please your taste buds and your body. It doesn't get much better than that.