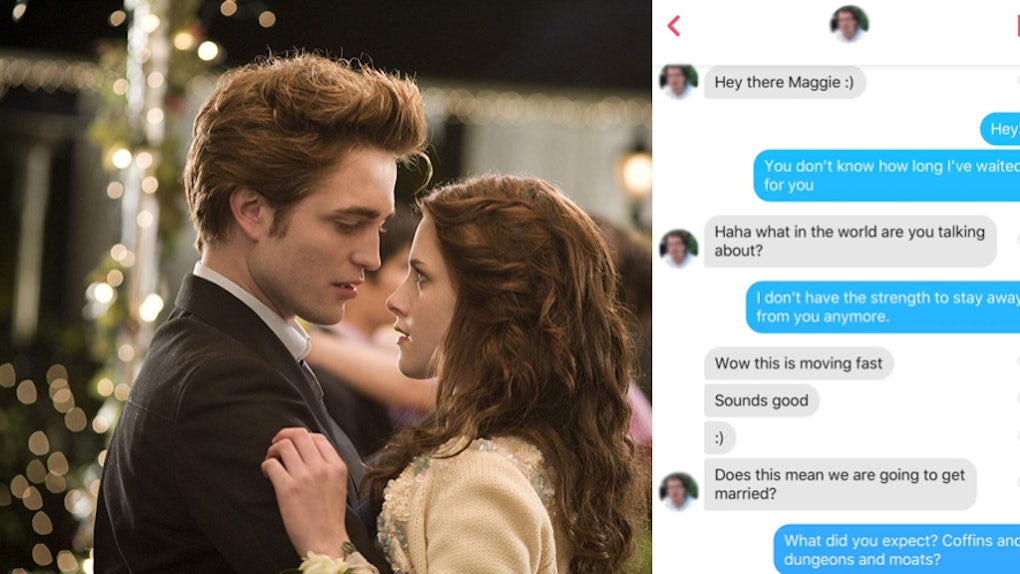 I Sent 'Twilight' Quotes To My Tinder Matches & Here's What Happened

Fall is in full swing, which means it's officially no longer way too early to start planning the over-the-top costume you'll wear for all the Halloween parties you'll go to, wrap up in cozy sweater as you grip a pumpkin spiced latte with both palms on your way to class, buy pumpkin-scented Yankee candles for your bedroom. I decided to transition into the new season by upping my Tinder game. But, instead of the overused "Where are you from?" and "So, what do you do for fun?" in true Halloween spirit, I sent my Tinder matches Twilight quotes. (You know, vampires, werewolves, long-haired red-eyed Michael Sheen — scary!)

Those pale, incredibly gorgeous bloodsuckers were on everyone's mind for a while there, myself included. I had never been that enchanted by any book up until then. When my family went to sleep, I'd use my sh*tty Nokia screen light (not even a flashlight, which it didn't have) to see the words and then I read and re-read the stories over and over again. I was #TeamEdward at first. When New Moon came out, I briefly switched to #TeamJacob, only to return to #TeamEdward by the end of the second film. My best friends and I literally screamed in the movie theater when Edward proposed. Suffice it to say, I was so excited for this little experiment.

Considering the dizzying love confessions and strangers don't usually match very well, I expected everyone to get spooked and unmatch me almost right away. But, to my surprise, that didn't (always) happen.

1. This Guy Just Wanted To Get It On No Matter What

Somewhat predictably indeed, he didn't wait too long to drop a sexual reference. But "in all seriousness," he decided to bring a droplet of romance into it with some (hopefully chilled) champagne.

2. And He, I Think, Just Joined Tinder To Find A Good Thai Restaurant

For context, my Tinder bio stated that I "love a good pad Thai." It was hard sticking to just quotes with this one since, if you don't know, they don't chat about Thai food all that much in Twilight. I mean, there is a restaurant scene halfway through but Bella orders mushroom ravioli, not fried rice, so I couldn't really use it.

As I said, he didn't want to depart from the Thai restaurant topic at all. So, when I, not-so-subtly, suggested we should, he promptly unmatched me. The key to this guy's heart must really be through his stomach.

3. This Guy Was One Of The Most Fun To Chat With

This dude, while a little spooked, seemed to be down to go with the flow and see where my very extra messages led. (As a side note: No, he didn't misspell my name. My Tinder name is, in fact, spelled Maggie and I just have no idea how to change it.)

Then again, even the most patient ones have their limits. Finally fed up, he responded with all frankness with a message that made me laugh out loud. When I later disclosed my true motivations, he said he found my remarks quite intriguing and that he "just figured you were smarter than me an I wasn't understanding your references." Humble, indeed.

4. This One Just Went Along With Anything I Said

It took a while for him to respond to me but when he did, he seemed more than happy to go along with anything I sprung on him.

You can't really claim a word to be a quote but hey, psychic Alice does say the word "mirrors" as she speed-draws Bella's old ballet studio. In this case it brought Justin Timberlake into the conversation.

5. I Just Went All In With This One

Wasting no time, I just laid all of my cards on the table with this guy.

Then he proceeded to call me a child and sent a gif of a baby lamb bottle-fed by a puppy. I gave him a couple points back for the cute visual but decided to end it with that.

6. Going All In Didn't Quite Work For This One

I had this quote ready for one poor guy that I'd scare the sh*t out of and well, it kind of worked. He seemed very flustered and, not understanding what he did wrong, proceeded to keep asking if I wanted to talk about something else. I didn't have the heart to keep going to I spilled the beans right then and there.

7. And Then There Was This Guy That Turned The Tables On Me

I wasn't sure if I was the more intense one with this particular repartee. Starting off with a remark on my first profile photo, he went all in, wasting no time. Not only did this guy not seem weirded out by anything I said, he hit me with equally impassioned replies and then asked if I wanted to meet up that same night. His bio did say "the best ones are the crazy ones" though so then again, maybe I should've unanticipated this.

When I confessed to my real intentions to him, however, he said he was already aware of the source of my quirky messages and that he even responded with a Twilight quote of his own!

I was so impressed I even misspelled "missed*" in my reply.

All in all, I had a lot of fun with this, but aside from potentially fun first dates (I'll keep you posted :)) I learned a valuable lesson: turns our Twilight quotes serve as amazing ice-breakers (just don't take it so far as to be unmatched) so I suggest you incorporate them into your next dating app banter and spice it up a little. Don't worry, when you tell them you're really just quoting a movie, they apparently find it mostly hilarious.