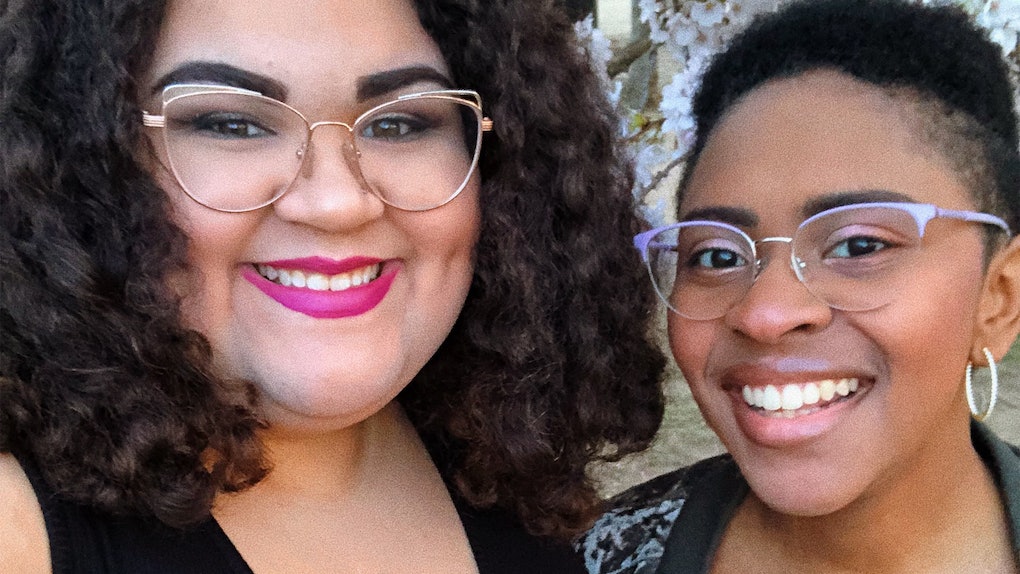 I, like many people, have had to confront trust issues in my relationship. Within the first six months of my relationship with my girlfriend Genna, trust issues stemming from jealousy and insecurity were the lemons life gave me. Being in a monogamous long-distance relationship didn't help one bit, because our bond is built on the trust that we'll both be committed and faithful — no matter how difficult the distance, loneliness, and temptation of others become.

We got together at our internship program during summer 2016 and parted ways that fall. I was attending school in Syracuse, NY and she was attending school in St. Petersburg, FL. It was during fall and winter 2016 (and a bit of the next spring) that my trust issues persisted. As terrible as it is, my mind would explore and revel in the possibility of my girlfriend cheating on me. Every person she expressed attraction to and every old flame that sparked back into her life added another question mark in my file of her. Because we were long-distance, there was no way to verify any details of her mundane life beyond what she told me. It created a vicious cycle of belief and doubt.

For the most part, I kept these (largely unfounded) concerns in check. I loved my girlfriend and wanted to continue building our relationship. Other times, my worries got the better of me. When we did link up, we did agree on an "open phones" policy. I never found anything that would make me distrust her, but the back of my mind still bubbled with fear and unease. To be clear: It wasn't her search history I was worried about. The idea of my partner watching porn has never bothered me in the slightest. Not only do I see it as a healthy practice, but one that explores unobtainable fantasies. My brow stayed wrinkled over the kind of fantasies that could be realized: flirty classmates, fine-*ss co-workers, and gorgeous strangers slipping her their Instagram handle at her favorite Thai joint.

There were two stand-out incidents where this line of thinking did a number on our relationship. In fall 2016, Genna had run into a former f*ck buddy of hers who needed help studying. And I persuaded myself it was a recipe for disaster. The thought of them hooking up, both figuratively and literally, made me anxious. My trust issues convinced me that old embers would be rekindled in the intimate setting of a study date. Something spicy would definitely happen. I told Genna she couldn't meet up with her. Although Genna had been a wonderful partner and had checked in with me to see how I felt about it, she didn't like my answer or my reasoning. But she wanted to respect my wishes — and set a good precedent, especially since our relationship was still blossoming — so she refrained.

Our big conversation about trust didn't happen until a few months later, in spring 2017. One of Genna's friends (who I'll call Amaya*) needed a prom date. She and Genna went way back, no one else was working out as a date, and so she asked Genna to go with her to prom. The romantic magic associated with prom, their foundation of a decade-long friendship, and the fact that Amaya was queer, too, made me feel some type of way about it. So, I said "no." And even though Genna agreed with my rhetoric, she respected our relationship enough to not take Amaya to prom anyway.

Still, this incident brought on a big conversation between us. In the moment (and even now), talking about it made my whole body prickle with embarrassment. Yes, I did have a clear thought process leading up to my "no" verdicts. But talking it through with Genna made it clear: My anxious brain jumped to conclusions.

Looking back, I see how stupid it was. That potential study buddy could have gotten a F on her exam because I was insecure and let trust issues get the better of me. As for Amaya, I know she turned out OK — we're really good friends today. In fact, she's one of my best friends. So, I'm sure you can understand that every time I think about this funky phase in my life where this sweet, dorky, gentle nerd with a heart of gold was demonized in my head to potentially be the Other Woman, I want the earth to swallow me whole. In the grand scheme of things, Genna not accompanying Amaya to prom didn't derail her life. But Amaya did stay home that night, for simply no other reason than my trust issues. Yeah, yikes.

I knew that continuing a relationship steeped in trust issues and jealousy isn't healthy, mentally or physically, for either party involved. It was clear that I needed a paradigm shift. Trust is crucial to all relationships — especially romantic ones, especially long-distance romantic ones. We were either going to address the issue or have to go our separate ways, for our peace of mind and sanity.

It took some time to work out just what was up during this era of my life. My findings go like this: My trust issues manifested as jealousy and it all came from chronic insecurity — the understanding that I wasn't good enough. Difficulty believing your partner is a common problem in relationships with trust issues. For example, your partner could say "I love you" and you'd have a hard time believing them because of your trust issues. Well, my girlfriend frequently told me that she loved me and I did believe her. But see, for me, being loved and not feeling good enough weren't mutually exclusive.

When I was growing up, my parents told me that they loved me all the time. And then, in the same breath, they'd remind me that I was still not good enough — no matter how sparkling report cards I brought home, how many lead roles I got, how many tennis matches I won, or how many dope articles I got published. I brought these insecurities to a romantic context, where I subconsciously decided, "Yes, my girlfriend loves me. Fine. But that doesn't mean she doesn't also see me as an insufficient partner / not hot enough / not smart enough / not funny enough and won't go looking for someone else to fill that void."

Over time, my trust in Genna was cemented. The years just helped prove, time and time again, that I never had any reason to distrust my partner. And when Genna would go out to the club or the movies or a study date or wherever with someone — even an attractive someone — I learned not to listen to the irrational, jealous side of me that constructed a sordid narrative. Those situations stopped arbitrarily rubbing me the wrong way, because I learned how to turn to logic and talk myself through those pangs of unease.

Liz Higgins, a marriage and family therapist who specializes in millennials and dating, told Elite Daily that trust issues stamp out "the necessary space and freedom that an interdependent relationship requires." They can cause couples to be more detached, less optimistic, and on less sure footing. And that's why it's crucial to address trust issues in your romantic relationships — particularly in a non-accusatory, non-judgmental way. "The important thing here is to get to the bottom of it, and, if you’re both willing to take the steps to get there, that is possible,” Higgins told Elite Daily. “It is often out of trust issues and hurts that some couples are able to create an even stronger and more emotionally intimate partnership.”

The big turning point was shortly after the Amaya incident. In late spring 2017, there was an opportunity for Genna to link up with her most recent serious ex, Caleb*. It would have been a big deal, because Genna had been long-distance with him, too. But instead of the distance being Florida and New York, as it was for us, it had been the U.S. and England. At the time, he seldom came to the States and was going to be visiting New York City. They could finally meet up after years of not seeing each other (it's pretty hard to run into your ex when there's an ocean between you). When Genna brought up the idea of them possibly hanging out in NYC, I was completely OK with it — when the past me would have given her a hard "no." In a recent conversation about it, Genna specifically remembers how mature I was in that moment and that I said to her, "I don't want you to block out a whole part of your life because of me."

That is not to say that irrational pangs of jealousy or unease don't pop up to this day. I'm human, so it's not something I can uninstall or delete. Co-workers with undeniable chemistry, childhood sweethearts with killer aesthetics, and sharp, beautiful classmates still exist. But just like Higgins pointed out: it's often because of trust issues (and other relationship problems) that couples can build a stronger relationship. Because Genna and I have had these uncomfortable conversations with each other, we can be 100 percent honest. We can talk frankly about about not feeling safe or attended to, and about our aesthetic appreciation or straight-up crushes on people we know.

Yes, talking about sticky, sensitive subjects like these ones isn't easy. It can definitely be uncomfortable, but it will always be helpful. My partner and I always know where the other person is at because of it. And that transparency — that confirmation I have no reason to distrust my partner — has made trusting her that much more easier. I can vouch for that, 1000 percent. Trust me.