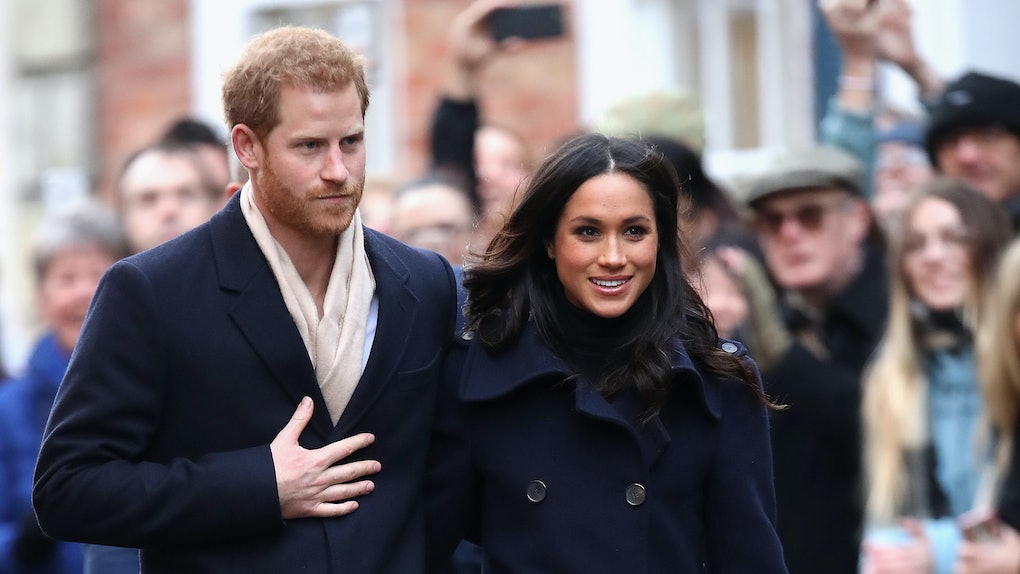 For those of you who are royally disheartened to learn that you won't find a place card at the Prince of Wales' impending nuptials, don't get yourself into a tizzy. Super sleuths have uncovered how to watch Prince Harry and Meghan Markle's wedding next spring, so you'll be entitled to a front-row look at all the action. The happy couple will certainly be pleased to know that you're there in spirit (even if they don't actually know you).

Cameras will allegedly be permitted in St. George's Chapel at Windsor Castle when the two lovebirds take their vows, a wonderful situation if your invite was lost in the mail... or if you never got one to begin with. Reports claim a pool camera will be set up, which means that all media outlets will be able to plug in and run the ceremony via broadcast TV, cable TV, and digital platforms, according to TMZ. All eyes will be on the bride — literally.

Prince Harry's big bro is certainly no stranger to big ceremonies. When Prince William and Kate Middleton tied the knot six year ago, roughly 27 million Brits and 23 million Americans tuned in to take a peek, TMZ further reported. Under those circumstances, you're certainly not going to want to have any wardrobe malfunctions or makeup catastrophes, though Markle would look flawless under any circumstance. The newly betrothed might want to have a chat with Will and Kate about what to expect.

There is still some time before the bride makes her way down the aisle. Reports have circulated that Memorial Day Weekend will be go time, though no particular date has been revealed — only that the two will say "I do" in May 2018. On Tuesday, Nov. 28, Kensington Palace released the following memo:

The marriage of His Royal Highness Prince Henry Of Wales and Ms. Meghan Markle will take place at St. George's Chapel, Windsor Castle in May, 2018. Her Majesty The Queen has granted permission for the wedding to take place at the Chapel. The Royal Family will pay for the wedding. Further details about the wedding will be announced in due course.

Naturally, everyone is anxiously awaiting the details — forget that "in due course" mumbo jumbo. To tide you over until the big day and the matrimony steps along the way, you can relive Prince Harry and Markle's engagement — it's guaranteed to make you swoon more than any romance story out there.

While the two were making a cozy dinner — or at least attempting to tackle a rotisserie chicken — Prince Harry completely surprised his lady love and got down on one knee. According to an interview, Markle said, "As a matter of fact, I barely let you [Harry] finish proposing. I said, 'Can I say yes now?'" ~Sigh~ Our hearts!

Apparently Markle was so excited about calling Prince Harry her fiancé that she completely forgot about one minor detail: the ring. This is no ordinary ring; the piece's center stone was sourced from Botswana, a meaningful place for the two of them, and the two smaller stones were actually Princess Diana's. It was Prince Harry's way of ensuring his late mother was there for the journey.

Commenting on Princess Diana, Prince Harry said she and Markle would be quite the pair. "Oh they'd be thick as thieves, without question," he said, according to Business Insider. "I think she would be over the moon, jumping up and down, you know so excited for me, but then, as I said, would have probably been best friends ... best friends with Meghan. So, you know, it is days like today when I really miss having her around and miss being able to share the happy news."

She is definitely with the happy couple throughout this exciting new chapter, and the rest of the world is, too. Congratulations to you both.