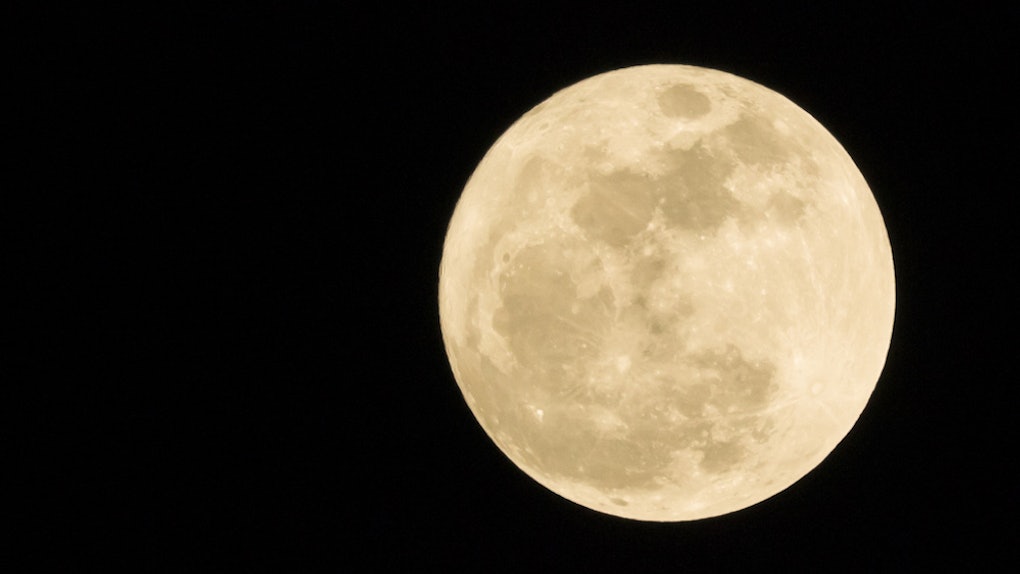 We can all take a little advice from the moon. Our circle in the sky is always something we can look up to, and on New Year's Day it will truly be living life to its fullest. (Go big or go home, right?) A supermoon on the first of the year might sound a little spooky, but it's also an amazing way to ring in something new that already seems to feel so good. The universe has a lot in store for us this year, and so why not kick it off with something equally as earth-shattering? You won't want to miss the opening ceremonies, so we're giving you some advice on how to see the first supermoon of 2018.

The January, the full moon is often called the Wolf Moon. It has also taken on other nicknames like the Old Moon, Ice Moon, Snow Moon, and the Moon after Yule. Although, typically, the name Snow Moon is reserved for the full moon that comes along in February.

The supermoon on New Year's Day is actually part two in a trilogy of full moons. The third will happen on Jan. 31, and also include a total lunar eclipse, causing a Blood Moon. In other, not-so science-y, words -- the moon will look like a wheel of Gouda or orange cheddar, instead of the usual round of parmesan.

So, when and where can you see this space show? Here's the details.

When can you see the supermoon?

The Wolf Moon will be at its peak at 9:24 p.m. EST. According to Time and Date, the moon will rise around 4:34 p.m. in the East-northeast corner of the sky. Since this moon is a supermoon, you won't be able to miss it. It's like when we get a food baby post-Christmas dinner, but are insanely content with the coma to come -- the moon will be about 14 percent more bloated and about 30 percent more luminous. Quite the glow-up if you ask me.

When the moon becomes "super," it simply means that it is closer to the Earth during its orbit. The planets and moon have orbits shaped something like an oval, and when the moon comes over the horizon line it'll share the sky with the sun for just a bit before lighting up our world more than before.

If you're viewing the Wolf Moon from the other side of the world, peak will be on Jan. 2. You won't want to miss the first full moon of the year. Pop the champagne one more time, because there's a party in the galaxy!

Where can you see the supermoon?

The supermoon will be located very close to the constellation Gemini, according to the astronomy on Space.com. Pollux is the brightest star in Gemini and is actually larger than the sun in reality.

On the night of the Wolf Moon, planets like Mercury, Venus, Mars, Jupiter and Saturn won't be visible if you live in the northeastern US. On an average night, you can see our planetary neighbors rise and fall with the stars, but on New Year's night, the supermoon will be completely stealing their celestial spotlight. They'll disperse into the darker surroundings of the moon, and take the stage again when the full moon begins to fade.

If you really want the clearest of #views, you should get away from buildings and get grounded in nature. Areas with less air pollution and more trees won't be as foggy and cloudy. Find a rooftop or a nearby park and just look up. You'll be soarin' with the supermoon and the stars this New Year's Day.