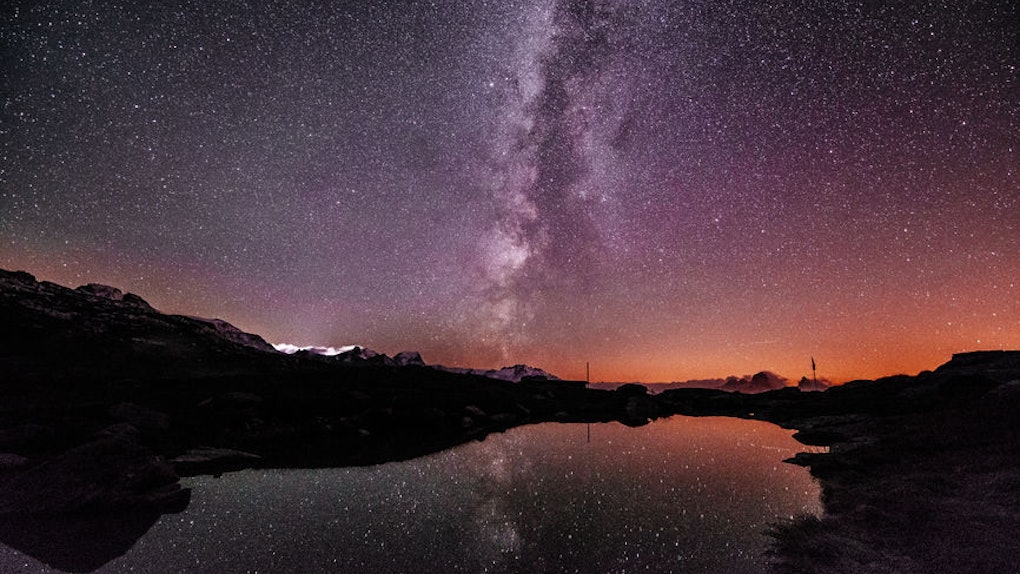 There's nothing as precious and priceless as catching sight of a shooting star streak its mystifying light across the night sky. It's as rare as it is unexpected, and even if you were waiting patiently for your chance to see one, it's still unbelievable when you actually do. Whether you believe in magic or not, who can pass up an opportunity to wish on a shooting star? Your inner-child would be so disappointed if you did. If you're hoping to infuse your summer with some galactic enchantment, then knowing how to see the Delta Aquariids meteor shower 2018 will help you make it happen.

Now, what are the Delta Aquariids, exactly? Well, every year, this collection of meteoric fireworks begins blasting through our atmosphere around July 12, often continuing until August 23. As you may have already suspected, shooting stars aren't literally shooting stars. They're actually remnants of much larger comets traveling through our atmosphere at unfathomably fast speeds. So fast, in fact, that the glowing streak of light shooting stars are so famed for is really just the space particles burning up due to the turbo-charged momentum. Although it's not a confirmed fact, astronomers suspect that the Delta Aquariids originated from Comet 96P Machholz, according to NASA. Based on their radiant — AKA the section of the sky the shooting stars seem to originate from — the Delta Aquariids travel from the direction of the constellation Aquarius.

Although the Delta Aquariids have been trickling through the Earth's atmosphere for a couple of weeks now, its peak will occur on the evening of July 27. If you're a follower of astrology or astronomy, you probably already know that this also happens to be on the same day as the longest total lunar eclipse of the century. While the presence of a full moon inevitably drowns out our ability to see the rest of the light that the night sky offers, this blood moon is considered a micro-moon, according to EarthSky.org. A micro-moon is essentially the opposite of a super moon, making it the the smallest full moon of the year, which shouldn't hurt your ability to see it as much as it usually would.

However, the lunar eclipse isn't the only problem you'll have while trying to watch the Delta Aquariids. Generally speaking, this galactic phenomenon is best viewed from the Southern Hemisphere and the southernmost latitudes of the Northern Hemisphere, according to NASA. However, viewers further up north have been known to catch glimpses of shooting stars, especially when they go out of their way to watch them correctly.

While the total lunar eclipse is also unfortunately reserved for only a few special parts of the world (such as Africa, Australia, the Middle East, southern Asia, and the Indian Ocean, according to Space.com), those who happen to be in any of these locations will be able to see one of the most gorgeous and incredible extravaganzas in the sky as the blood moon is surrounded by shooting stars.

If you're out of luck and you live in a region far away from all the cosmic glory, you still have a chance to see the Delta Aquariids. However, a few things must be taken into consideration.

For one thing, finding a spot that's clear of light pollution is crucial. It would be best to travel somewhere far away from big cities, perhaps somewhere rural with minimal light at night. Let it also be known that the Delta Aquariids has a radiant of the constellation Aquarius, so it would be wise to look up where that constellation is situated from your location. Your eyes should also have a chance to get used to the dark before viewing, for some of the shooting stars may appear too faint for most people to see. NASA recommends taking at least 30 minutes for your eyes to adjust to the lack of light.

If you're unable to see any shooting stars from the Delta Aquariids, don't sweat it. Lucky for you, the Delta Aquariids overlap with the Pereseid meteor shower that occurs in August, so if you think about it, the magic is only just beginning.