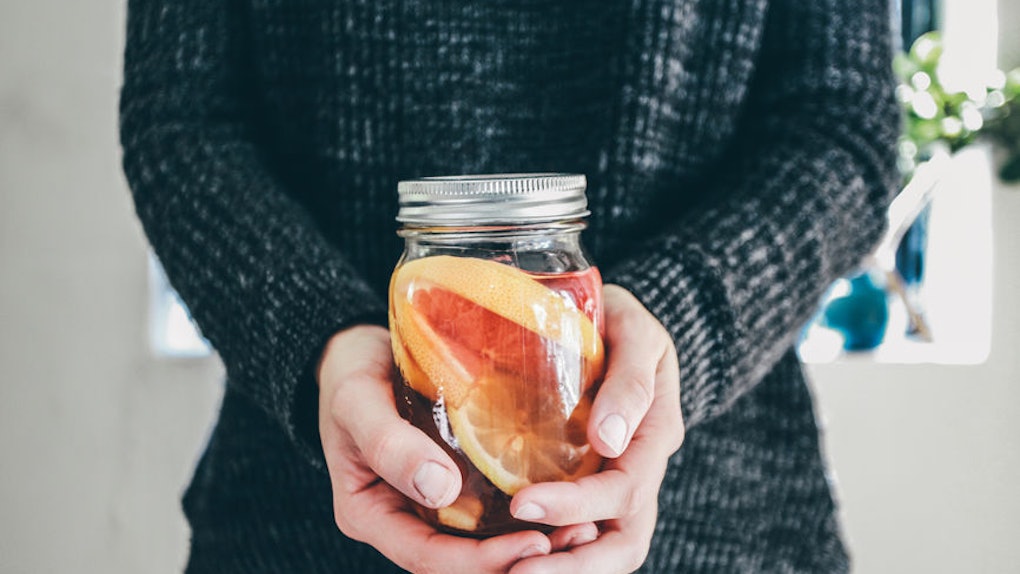 How To Make Overnight Oats For Easy, Fall Inspired Breakfasts, According To A Nutrition Expert

What are your thoughts on breakfast? Are you the type of person who wakes up ravenous, or who can't possibly imagine eating so early? Personally, when I hop out of bed, the only thing I can think about is coffee, food, and getting it all in my belly ASAP. The one issue I often face, however, is what to make. Usually I'm a smoothie person, but sometimes that gets a little old. So, as autumn rolls full speed ahead, I've decided to put the blender to rest for a little while to learn how to make overnight oats. After all, there are so many delicious variations on this theme. Plus, much like my go-to smoothies, overnight oats seem like another easy way to pack a nutritious punch with pretty minimal effort.

Of course, if you search for overnight oats recipes online, you'll pull up a ton of results, and it might seem overwhelming to figure out which meal is best for you. Thankfully, Corey Phelps, a nutrition expert, pilates teacher, and founder and creator of the fitness program Cultivate365, has shared her four favorite recipes with Elite Daily to make things as easy as possible for you.

Before you whip out all your mason jars and get to work, make sure you have everything you need for your overnight oats base: According to Phelps, you'll need a half-cup of old-fashioned oats, which you'll mix with a half-cup of milk (of your choice — i.e. dairy-free works here). You'll also need some Greek yogurt, as well as a touch of salt and honey. Pro tip: Phelps recommends you pack an extra health punch by stirring in Vital Proteins vanilla collagen protein.

Once you have your base assembled, here are four different ways to complete your delicious, fall-inspired overnight oats.

Move over, PSLs — there's a new pumpkin breakfast treat in town. For this bad boy, add one-third cup of pumpkin puree on top of your oats base, then sprinkle a quarter-teaspoon each of cinnamon and nutmeg. Next, throw a quarter-teaspoon of vanilla bean powder in there, then finally, top it all off with raw pepitas (aka pumpkin seeds).

What's autumn without apples, right? After you take that weekend trip to go apple-picking (and pick up some apple cider donuts along the way, because that is a must), use some of those crisp fruits to whip up this tasty overnight oats recipe.

Stir in a half-cup of chopped apple, sprinkle in your cinnamon and nutmeg (again, a quarter-teaspoon of each), add a tablespoon of ground flaxseed, and finally, top it all off with your choice of chopped pecans or walnuts. Ugh, yum.

This particular recipe is possibly the most unique of all, at least IMO. Start off by stirring in a half-cup of cubed, cinnamon-roasted butternut squash to your oats base, then add your sprinkles of cinnamon and nutmeg. Drop some chopped pecans and chopped pomegranate on top, and that's it! Prepare for your tastebuds to explode, people.

Ah, is there anything more peaceful than strolling around a farmers' market? Oh wait, there is: eating this ridiculously tasty overnight oats breakfast!

Stir a half-cup of cubed, cinnamon-roasted sweet potato into the oats, followed by cinnamon and nutmeg. Next, add a tablespoon of creamy almond butter, then top the jar off with some almonds and chopped, dried cranberries. Dang y'all, fall has never tasted this good.

More like this
7 Wine Delivery Gifts To Send For Mother's Day To Make Mom Feel Special
By Marisa Casciano
The TikTok Recipe You Should Try, Based On Your Zodiac Sign
By Chelsea Jackson
12 Best Mother's Day Brunch Delivery Gifts That Mom Will Love A Waffle Lot
By Rachel Chapman
Stay up to date