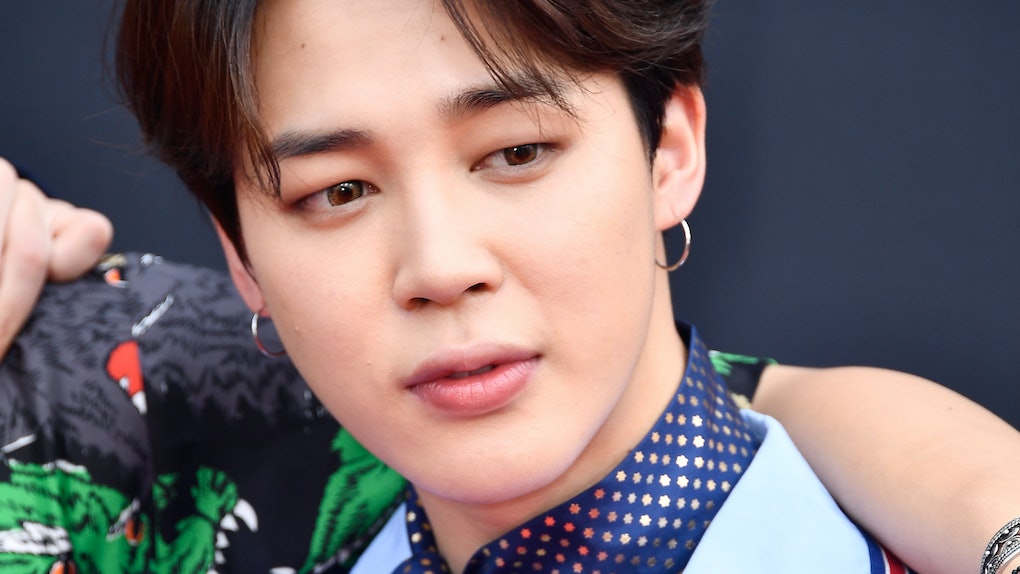 How Many Piercings Does BTS' Jimin Have? It Depends On The Day, Really

What's there not to love about Jimin from BTS? His personality is so bright and positive, which could explain why he always manages to make friends with everyone around him. No wonder why whenever BTS attends award shows, Jimin's name always seems to be trending on Twitter. If it's not because Jimin said something cute on the red carpet, then it's probably because he showed up rocking something new, like a new hairstyle, a pair of sleek sunnies, or an ear-piercing. But Jimin's never one to keep one style for long, so that's why it can be hard to keep up with all his fashion choices. You're here because you're probably wondering, "How many piercings does BTS' Jimin have?" Jimin's definitely got a few, so let's try to see exactly how many he has, OK?

Hmm, where should I start? As the BTS ARMY knows, BTS is always changing up their looks, so the amount of earrings Jimin has at once is hardly ever the same. In some pictures, Jimin could be rocking one or two earrings, and then at other times, it can be more. That's why it's kind of difficult to figure out how many piercings he has in total.

Let's start with Jimin's most recent social media posts. For RM's birthday on Sept. 12, Jimin posted a video of himself wishing his fellow BTS member a happy birthday. In the video, you can clearly see that Jimin has at least two earrings — one on his left ear and one on his right ear. He doesn't turn his head around too much, so you can't tell if he has more earrings than the video shows.

That's two earrings, but how many piercings does he have? Does he really have just two? Heck no! This is Jimin and he loves his accessories. He definitely has more, and BTS' "Blood Sweat & Tears" era proves it.

This screenshot from the "Blood Sweat & Tears" music video shows that Jimin had three piercings on his left ear.

OK, that takes care of his left ear, but what about his right ear? Well, in this "ASK IN A BOX" video BTS participated in, you can see that Jimin had two earrings on his right ear, bringing his apparent number of piercings to a total of five.

See? Jimin has five piercings in total, which is the same amount of piercings V has, too. You'll be surprised to know that Jimin and V don't have the most piercings in BTS.

That title actually belongs to Jungkook, who has been wearing seven earrings in his ears lately, although he might have up to nine piercings in total since he also used to have two helix piercings. Long-haired Jungkook with dangly earrings totally wrecks me and the rest of the BTS ARMY.

BTS rocks any accessory, and any number of them at once. I can't wait for BTS to return from their vacation so I can see if RM, Jin, Suga, J-Hope, Jimin, V, or Jungkook got any more piercings while they were away. I wouldn't be able to handle it if they did come back with more piercings, because as these photos show, the members all look so good with earrings.