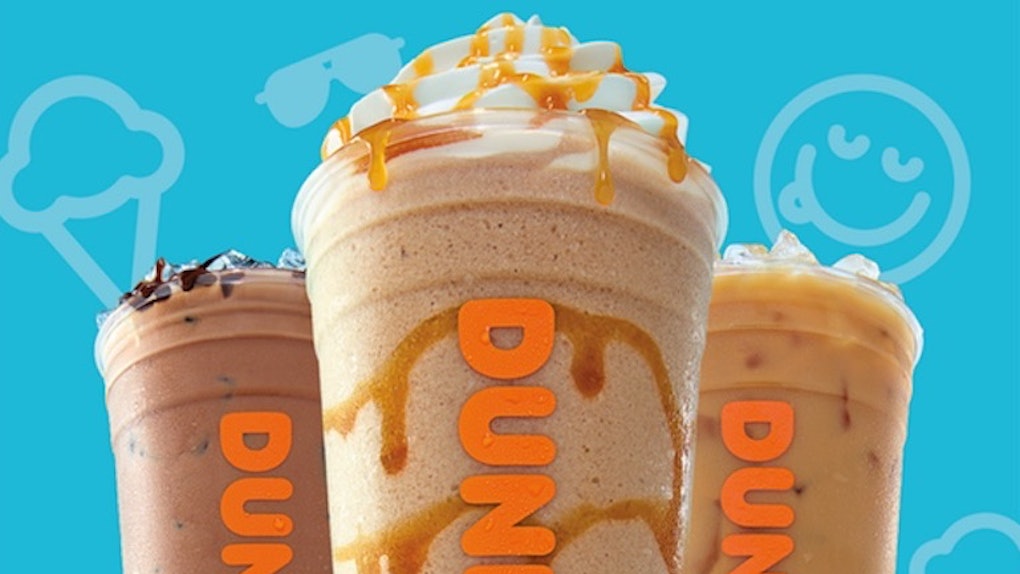 How Long Will Dunkin's Baskin-Robbins Coffee Flavors Be Available? Try Them This Summer

Two of my favorite things about warm weather are iced coffee and ice cream. That's why I love Dunkin's new ice cream-flavored coffee selections so much. Yes, they exist — and if you haven't heard about 'em yet, you're in for a treat. I'll get into detail about each flavor soon, but here's the DL: Dunkin's new (and returning) coffee flavors are inspired by Baskin-Robbins ice cream. If you're a fan of both coffee and dessert (like me), then you're probably wondering how long Dunkin's Baskin-Robbins coffee flavors will be available for. Well, I have good news and bad news.

I'll start with the bad news, though. According to Dunkin', its new Baskin-Robbins ice cream coffee flavors will only be available for a limited time. Yes, that's a bummer, but don't get too sad yet. The good news is that the coffee flavors are part of Dunkin's seasonal menu. That sounds to me like they'll be around throughout the duration of summer 2019.

Yes, it's bitter-sweet. But even though the ice cream-flavored coffees won't be around forever, they'll be here throughout the sunny season. That's my favorite time to eat (or drink) ice cream, anyway — so I'm pretty happy about it.

If you haven't heard about Dunkin's Baskin-Robbins-inspired coffee flavors yet, allow me to catch you up. Dunkin' announced the new brews on Wednesday, April 24, and they'll put you in the mood for dessert. According to the company, the three seasonal coffee flavors that recently hit the menu include Banana Split, Pistachio Almond Fudge, and Butter Pecan. (FYI, Banana Split and Pistachio Almond Fudge are new coffee flavors, but the Butter Pecan selection is a returning favorite.)

Since Banana Split and Pistachio Almond Fudge are new, I'll tell you about those first. According to Dunkin', the Banana Split coffee flavor boasts flavors of banana, chocolate, vanilla, and strawberry (just like an OG banana split). The Pistachio Almond Fudge option, on the other hand, features pistachio flavors with a "hint" of almond, per Dunkin'. That one's finished off with chocolate fudge, which totally amps up the "ice cream" vibes.

Now, I'll talk about the third ice cream-inspired coffee on Dunkin's seasonal menu: Butter Pecan. According to the company, the returning Butter Pecan coffee option features flavors of sweet cream and butter roasted pecan. I, personally, think it's a delicious option. However, I'm super curious about the new ice cream-inspired brews and will probably be trying those next.

Again, these sweet new ice cream-flavored coffees won't be on Dunkin's menu forever. Since they're only available for a limited time, sip on 'em while you can. While you're visiting Dunkin' throughout the summer, you can try even more new items on its seasonal menu. Those include the gorgeous Shooting Star Donut and the Cosmic Grape COOLATTA. FYI, both options are extremely Insta-worthy, so bring your cameras.

Now that you know about Dunkin's summertime offerings, you can plan your trips accordingly. Who knows, maybe you'll like the Baskin-Robbins-inspired coffee flavors just as much as ice cream.