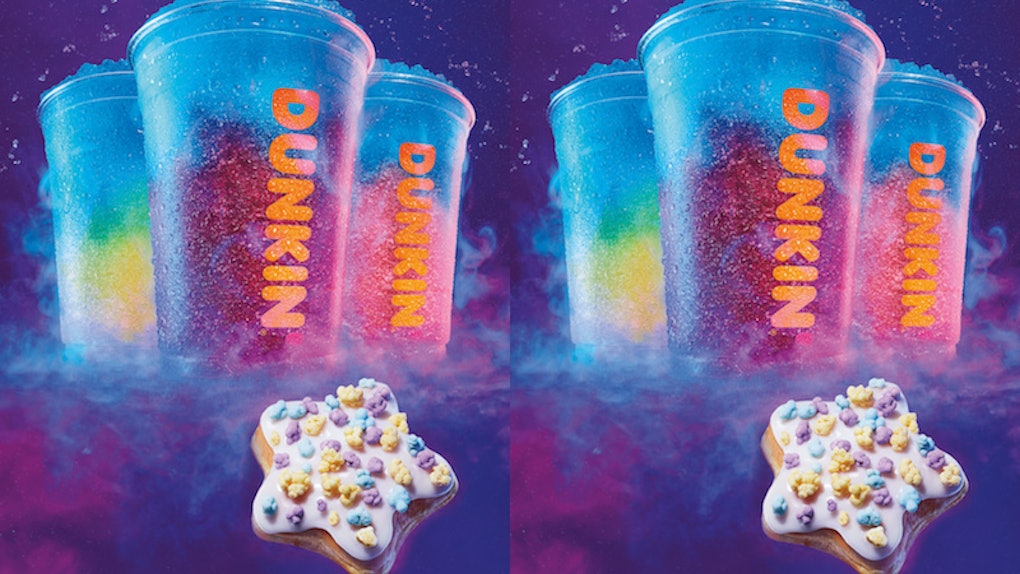 Dunkin' is bringing you a taste of the galactic, thanks to its impossibly 'Gram-worthy new spring menu. On Wednesday, April 24, you can head over to your nearest DD to treat yo' self to Dunkin's new Shooting Star Donut and Cosmic Grape Coolatta, which are just as photogenic as their names suggest. Just one word of caution: These cosmos-inspired sips and bites are pretty much guaranteed to make you starry-eyed and amp up your DD runs ahead of patio season.

In a press release shared on April 24, Dunkin' announced that several new dreamy menu additions were rolling out at storefronts. Ahead of the 50th anniversary of the Apollo 11's landing on the moon on July 20, the coffee chain is celebrating the countdown early with some space-inspired treats — and they're definitely not your typical spring or summer-inspired offerings.

The chain's Shooting Star Donut, aka the star of the lineup, definitely caught my eye with its galactic aesthetic and fun mix of flavors. Per the press release, the star-shaped treat is covered with "white icing topped with blue raspberry flavored popping candy clusters in blue, purple and yellow," giving you a sugary "flavor blast with each bite."

TBH, I was reaching for my keys and heading out the door to my nearest DD as soon as I heard the words "blue raspberry flavored popping candy," but its dreamy appearance is just the icing on the cake. Seriously, though, it's almost too pretty to eat, so I'd make sure to snap a photo of the photo before you inhale it.

No new bite would be complete without some on-theme sips, and Dunkin' is debuting a Cosmic Grape Coolatta to help you wash down your tasty donut. If you haven't had a Cosmic Coolatta frozen beverage before, it's basically a combination of two different Coolatta flavors for an out-of-this-world drink experience that boasts a constellation of bright colors. The new Cosmic Grape Coolatta, which is also available starting on Wednesday, April 24, is the perfect accompaniment to the Shooting Star Donut due to its mix of grape and blue raspberry flavors.

With the weather starting to heat up and patio season just around the corner, it's just another option to keep you cool and refreshed when summer officially hits. Plus, from now through Tuesday, May 28, Dunkin' faithfuls can try any small-sized Coolatta frozen beverage for only $2 at participating DD locations nationwide. Even if you're on the fence about trying this cosmic-inspired sip, you'd be remiss not to with this low price tag. Other Cosmic Coolattas include the Cosmic Pineapple Coolatta, which again mixes blue raspberry flavoring with a pineapple flavored Coolatta, as well as the Cosmic Strawberry Coolatta (which combines strawberry and blue raspberry flavors).

Again, any of these refreshing options can be had for just $2 until the end of May, so there's no reason not experiment with pairing your Shooting Star Donut with all of these new cosmic Coolatas. Here's to getting your go-to donut 'n frozen slush combination figured out by the time summer comes around.