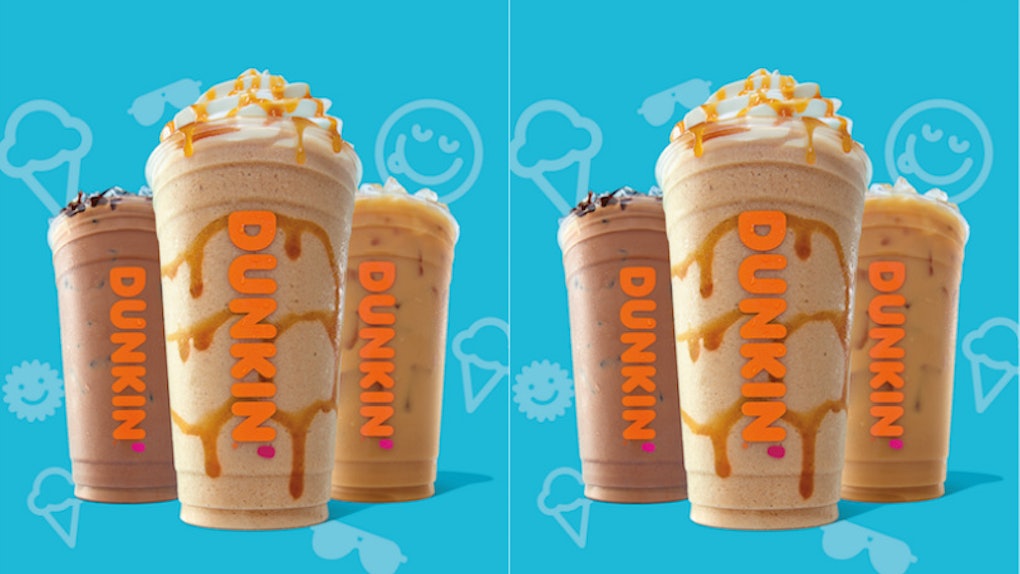 I have a habit of gearing up for summer a tad earlier than most — my high-waisted jorts usually come out from storage by April (honestly I'm wearing them right now), I'll start going to the beach in the middle of May, and I'm usually on an eat-ice-cream-everyday basis by early June. And similarly, it looks like Dunkin' is already prepared to take on the warm weather a few months early. Yes, you heard that correctly — Dunkin's new Baskin-Robbins-inspired coffee flavors for 2019 are literally summer in a cup, and honestly, I'm excited beyond belief.

New England-based coffee chain Dunkin' is ringing in the season known for pleasantly warm weather a little early, and I don't know about you, but I — personally — am a big fan of it. Just in time for spring, they are releasing the coffee flavors of any sugar-lover's dreams, which emulate classic Baskin-Robbins ice cream flavors. Each and every one of them are super sweet, make for delicious summertime treats, and are basically about to win the hearts of both coffee drinkers and sweet tooth ice cream fans alike. Check out each and every one of the new flavors, below, and try not to fall head-over-heels in love with them.

Dunkin' announced the immediate release of the sips in a press release on Wednesday, April 24. First up is their new Banana Split coffee, which — according to the brand — is the first time the chain has attempted the unusual flavor. It boasts tasty notes of chocolate, strawberry, and vanilla ice cream all in one, so it goes without saying I'll be sipping this at The Rockaways on the reg.

Next up is their new Pistachio Almond Fudge coffee, another totally new creation, which combines the delicious flavors of pistachio, hints of almond, and chocolate fudge, according to the brand. If you ask me, this tantalizing coffee sounds totally nuts (LOL get it?).

Last but not least is the brand's returning classic Butter Pecan, which is a total fan favorite. If you've never had their Butter Pecan coffee, it tastes strongly of butter roasted pecan and sweet cream, according to the brand. It's undeniably decadent and an incredibly refreshing way to start the day.

If Dunkin's new ice cream-inspired flavors sound like your ideal cup of joe, you're in luck. You are now able to taste each and every one of them in the form of hot and iced coffee, any of their espresso beverages, frozen coffee, or even frozen hot chocolate, according to Dunkin'. They will only be around for a limited time at participating Dunkin' restaurants, however, so definitely make a point to get your hands on some as soon as you possibly can. It would be a shame to miss out on this gloriously sweet opportunity.

OK, I don't know about you, but I, personally, value all things "summer" more than almost anyone I know. And I can safely say Dunkin's new ice cream-inspired flavors are about to become a regular part of my summer (and spring) time regime. Warm weather, here I come.