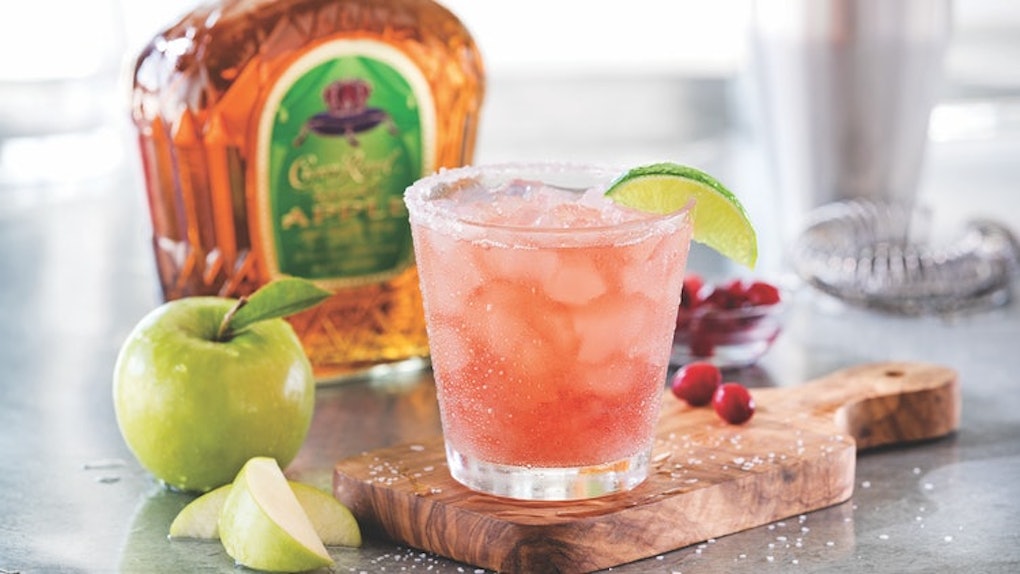 How Long Will Chili's $5 Crown Apple Crisp Margarita Be Available? Sip It In September

Ah, September. The leaves have finally started changing, there's a (highly anticipated) drop in temperature in the foreseeable future, and most importantly, apples are pretty much available in all culinary forms imaginable right now. If your love for apples happens to be hardcore AF (no pun intended) you were probably pretty excited to hear about Chili's latest and greatest fall creation combining apples, whiskey, and, of course, a classic margarita. So, in case you're wondering how long Chili's $5 Crown Apple Crisp Margarita will be available, you'll be happy to know that you can enjoy it for a few more weeks.

I don't know you at all, but I can assume that you're a relatively sensible person who likes to know exactly what you're drinking before you start drinking it. So, FYI, the Crown Apple Crisp Margarita — Chili's Margarita of the Month for September 2018 — blends Jose Cuervo Gold Tequila with Crown Royal Regal Apple Whiskey, cranberry juice, and fresh sour flavoring. The drink's rim is coated in sugar and it's garnished with a lime wedge. So, it's basically the ideal fall cocktail.

Unfortunately, though the $5 Crown Apple Crisp Margarita won't be available on its menus after September, per Chili's. Sadly, it won't be available for a higher price, either. It'll simply come and go for September only. So, it looks like a Chili's date is most definitely in order.

Oh, and this should probably go without saying, but customers can only indulge in this tasty fall treat as long as they're 21 years or older. Yep, that's right — you must be of legal drinking age to order and consume the Crown Apple Crisp Margarita. If you are, in fact, underage, you could always order a tasty sip from the non-alcoholic menu. Or, maybe you can grab some delicious chips and salsa. You could also be a pal and drive your of-age friends and family to grab this glorious gift from above. They might just need a ride after enjoying one of these strong, strong babies. You'll have lots of opportunities for deals like these when you're older, trust me. Chili's is chock full of drink deals.

If you are just looking to indulge in a non-alcoholic apple treat, however, Taco Bell just released a tasty new frozen beverage known as the Caramel Apple Freeze. It's now available for purchase at T-Bell locations nationwide, and it mixes flavors of tart green apple with sweet, creamy caramel. It's only around for a limited time, and it's sold in a regular size for $2.29, as well as a large for $2.59. Honestly, I might snag one after a Crown Apple Crisp Margarita, because buying both of these sips definitely won't break the bank.

There's clearly no better time than right now to indulge in fall treats, and it's no surprise that Chili's seems to be going all in on fall flavors in September. I'm absolutely beside myself to know that margarita season clearly isn't over, now that "fall margaritas" are finally a thing (yay!). TBH, if you need to find me anytime soon, you can assume that I'll sitting at the Chili's bar — before I eventually make my way to Taco Bell, of course. Apple drinks for days, y'all.