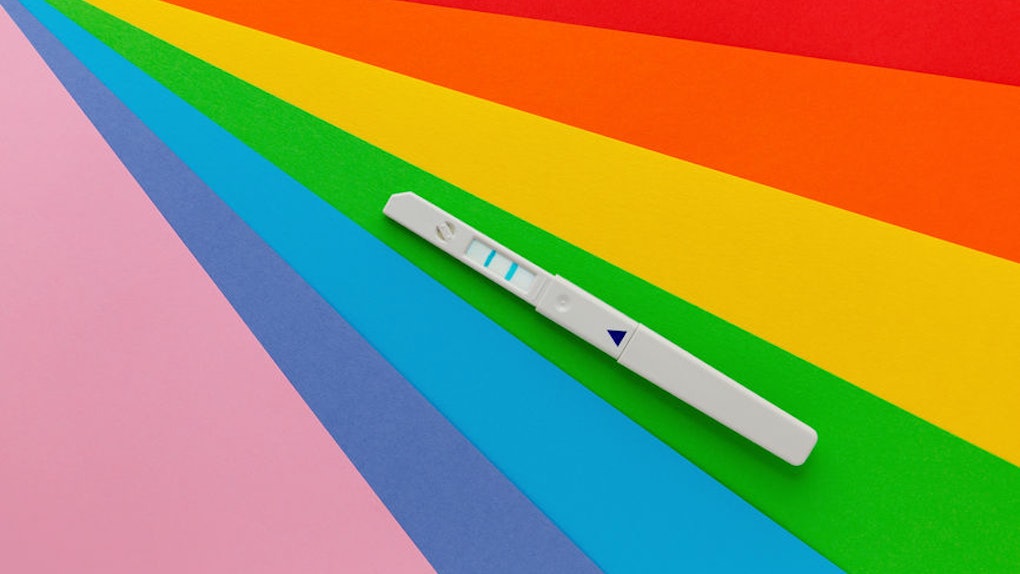 How Long Does It Take To Get Pregnant On The First Try? Here's Why An OB/GYN Says Not To Panic

It's one of the many (somewhat cruel) facts of life: When you’re actively avoiding getting pregnant, there’s still a chance that it can happen, and when you’re actively trying, there’s a chance that it can be a bit of a struggle. Indeed, once you’ve decided to try and conceive, you may be eagerly awaiting that thrilling little positive sign on the pregnancy test, but you shouldn’t get discouraged if it takes many attempts. How long does it take to get pregnant on the first try? Well, as it turns out, it’s pretty hard, according to Dr. Mary Jane Minkin, OB/GYN at at Yale-New Haven Hospital and clinical professor at Yale University School of Medicine. In fact, most couples need to keep trying for months before they see their efforts pay off.

Need proof? One 2003 study, which was published in the journal Human Reproduction, followed 346 women who were trying to get pregnant by having sex while they were ovulating, and found that 310 women were able to conceive by the end of the year. The study also revealed that only 38 percent of women got pregnant after one month, while 68 percent were pregnant after three months, 81 percent were pregnant after six months, and 92 percent were pregnant by the 12-month mark. The researchers concluded that most couples conceive “within six cycles with timed intercourse.” Meanwhile, The Bump conducted another poll for hopeful moms-to-be and found that while 34 percent of those who were trying got pregnant within the first month, 8 percent of women had to try for more than a year, and another 16 percent had to keep trying for more than two years to get pregnant.

“I tell folks to calm down if they aren't pregnant after the first month of trying,” says Dr. Minkin. “For most, it will take a bit of time.”

As for why women aren’t guaranteed to get pregnant every time they have sex around ovulation — there are a lot of factors at play.

“Lots of stuff has to go on to conceive,” explains Dr. Minkin. “Like sperm getting up into the fallopian tube at the right time and fertilizing the egg, and getting the fertilized egg properly implanted into the lining of the uterus. That's all pretty tricky!”

According to The National Infertility Association, 12 percent of women have difficulty getting pregnant (or carrying a pregnancy to term). And there are many factors that can affect your fertility (or infertility). The most common cause of infertility, according to Healthline, is ovulation-related problems, which can be a result of polycystic ovarian syndrome (PCOS) or premature ovarian insufficiency (POI). Additionally, pelvic inflammatory disease (PID) and endometriosis can cause blockage of the fallopian tubes, thus making it more challenging to conceive. Other less common problems include physical problems with the uterus or fibroids on the walls of the uterus. It’s worth mentioning that infertility is not always the woman’s problem — men can also experience infertility as well. In fact, according to The Office On Women’s Health, about one-third of fertility problems stem from the man.

However, infertility can be treated (praise modern medicine and technology!). Artificial insemination and assisted reproductive technology can be used to help a woman get pregnant, but in most cases, either medication to boost fertility or surgery to correct physical problems is used. Sometimes, these courses of action are combined to be most effective.

Remember: statistics show that it’s totally normal to take more that a few months to conceive. However, if you’re under the age of 35 and you’ve been trying to get pregnant for a year, or 35 or older and you’ve been trying for six months, Healthline recommends seeing your doctor to assess any health issues that may be related as well as to discuss your options for increasing your odds of conceiving.

Luckily, Dr. Minkin says there are ways to increase the likelihood that you get pregnant. She recommends using an ovulation predictor kit, which can detect which days you’re most fertile, and then timing your romps around that information. You're most likely to conceive when you're ovulating, which typically falls between days 10 and 20 of your cycle. Dr. Minkin also says that it’s crucial for women who are trying to conceive to take folic acid.

“Women who conceive while on folic acid significantly decrease their chances of having a baby with a neural tube defect (spina bifida) and probably other birth defects as well," she explains.

A few factors that can negatively impact a woman’s ability to get pregnant include age, poor diet, stress, excessive alcohol use, smoking, and the contraction of certain STDs and STIs, according to The Office On Women’s Health.

The reality is, there is no “normal” amount of tries it takes for a woman to get pregnant because each of our bodies and circumstances are unique. So, if you don’t conceive on the first try, rest assured that you’re in the majority. Many women have struggled with this — hell, even Khloé Kardashian had her fair share of issues with fertility. Also, remind yourself that there are things you can do to improve your odds of getting pregnant. When you start to feel impatient or frustrated, refer to the wise words of Aaliyah: “If at first you don't succeed, dust yourself off and try again.” And in the meantime, don’t forget to enjoy the ride (pun very much intended).