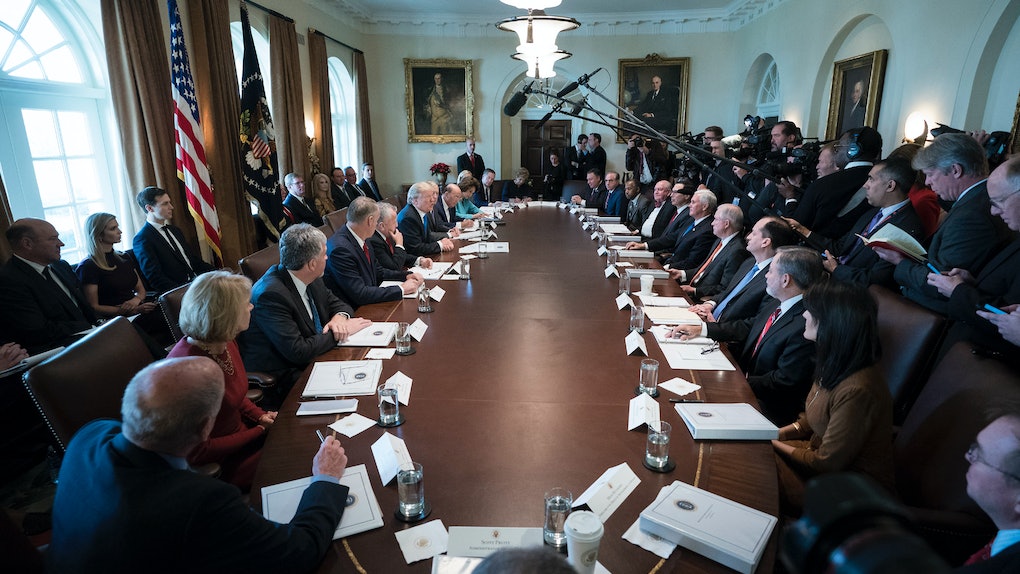 How Long Do Trump Staffers Last On Average? Not Long, Apparently

In what feels like the hundredth time, President Donald Trump announced on Tuesday that one of his key cabinet members was out of the job. A little over a year since Trump took office, the string of high-profile Trump staffers exiting the administration begs the question: Just how long do Trump staffers last in the White House on average? The short answer is, not long, apparently. The average length of time ex-Trump staffers served, from Inauguration until the date their departures were announced, is just 264 days.

On March 13, Secretary of State Rex Tillerson became the latest in Trump's team to have to update his résumé. "Mike Pompeo, Director of the CIA, will become our new Secretary of State," Trump tweeted Tuesday morning. "He will do a fantastic job! Thank you to Rex Tillerson for his service!" In moving Pompeo over to the State Department, Trump noted that intelligence officer Gina Handel would take over Pompeo's post as the next CIA director.

Before Tillerson and McEntee's departures, there were 18 departures in Trump's cabinet since Inauguration Day, bringing the new total up to 20. (Other departures not listed here include: Preet Bharara, Walter Shaub, Angela Reid, Andrew McCabe, Sally Yates, James Comey, and Michael Short. Some of these were not members of the cabinet, holdovers from the Obama administration, or not appointed by Trump specifically.) These departures include both firings and resignations.

Based on this list, I ran the numbers on how long these 20 staffers served on the Trump administration, calculated from the number of days since inauguration until their departures were announced, getting an average of 264 days. It's worth noting that some staffers stayed on past the dates their departures were announced. For example, Rick Dearborn's departure was announced in November 2017, but he was expected to leave in early 2018. But other staffers, like Hope Hicks, had been planning their exits before reports ever surfaced. So since it's impossible to know at what time each person mentally decided they were on their way out, I used the announcement date for consistency in calculating the end date for each staffer.

As for the start date: These calculations were made assuming their first day was Jan. 20, 2017, since that's the day the Trump administration officially began. Again, some staffers, like Anthony Scaramucci, were by Trump's side long before he was sworn in. Others, like Rex Tillerson, were selected prior to January but not actually sworn in until after Trump's inauguration. So again, to be fair, I used Jan. 20 as a benchmark.

Trump's staff changeover is already exceeding his predecessors. His firing rate, at six people just over six months in, was already well beyond anything seen in the Obama administration. At the one-year mark, according to the Brookings Institute, Trump's turnover rate was already three times Obama's.

And Trump is breaking tradition not just by the sheer volume of turnover, but by how he approaches the staff changes. Rather than quietly resolving any staff challenges with a discreet exit, he has a habit of making announcements of his firings — sometimes without any advance warning to the casualties.

Apparently, Tillerson didn't know he was fired until the rest of us. Trump made the announcement via Twitter, and CNN reports that Tillerson found out through the president's tweet.

Trump didn't seem too somber about letting Tillerson go, either, writing, "Congratulations to all!" in the Tuesday tweet.

It's not the first time he's announcement of a staff change using his favorite platform. Former FBI Director James Comey, who was fired on May 9, 2017, found out he was out of a job via news reports on TV while he was away on business, The New York Times reported. At first, he thought it was a prank.

A tweet by CNN's Jake Tapper suggests Tillerson wasn't expecting the announcement. According to the statement from State Department Undersecretary for Public Diplomacy Steve Goldstein, Tillerson "had every intention of staying, because of critical progress made in national security." Goldstein added, "The Secretary did not speak to the president and is unaware of the reason" for his being fired.

"We disagreed on things... we were not really thinking the same," Trump reportedly said of firing Tillerson, according to a tweet by CSPAN's Craig Caplan.

The reason why McEntee was fired also remains unclear. The Journal reports it had to do with a security issue, but CNN's Jake Tapper reported in a tweet Tuesday that McEntee is under investigation by the Department of Homeland Security for "serious financial crimes."

Whatever the reason for this week's latest departures by Trump staffers, they join a growing list of ex-administration members whose tenures have been remarkably short. As for who's next, and when the next departure will come, that remains to be seen.