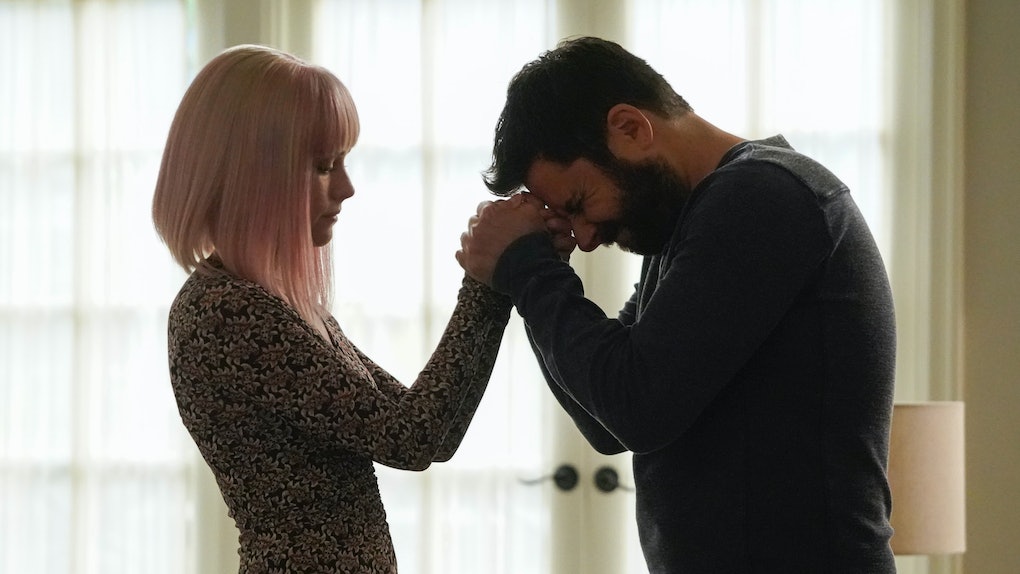 How Did 'A Million Little Things' Season 1 End? Catch Up On All The Drama

It's been a long summer away from one of network TV's most close-knit friend groups, but A Million Little Things is finally returning on Sept.26 for Season 2. Last season ended by cluing audiences in on the mysteries surrounding Jon's (Ron Livingston) death, but plenty of other plot points were left up in the air. Hopefully, many of these issues will be resolved in the episodes to come, but before Season 2 premieres, how did A Million Little Things Season 1 end? Here's everything you need to know to catch up on the drama.

At the very beginning of A Million Little Things Season 1, Jon died by suicide and left behind his family and friends to pick up the pieces. His widowed wife Delilah (Stephanie Szostak) felt especially guilty about Jon's death because she was worried her affair with his friend Eddie (David Giuntoli) played a role in it. However, it turned out Jon's suicide had to do with a secret from farther back in his past; he felt guilty for surviving the terrorist attacks of Sept. 11, 2001, while his friend did not. Delilah learned that not only was Jon supposed to be on the airplane with his friend when it was hijacked, but also, that friend was expecting a child with a woman named Barbra Morgan (Drea de Matteo), who Jon had been secretly in contact with all these years.

Even though Delilah and Eddie felt guilty about their affair, they still had to deal with a product of it throughout Season 1: Delilah was pregnant with Eddie's child. In the Season 1 finale, Delilah went into labor, so Season 2 will likely pick up with her giving birth. Throughout Season 1, Delilah led everyone — including her two children Sophie (Lizzy Green) and Danny (Chance Hurstfield) — to believe the baby was Jon's, not Eddie's, but Eddie might be letting the truth out in the near future. At the end of Season 1, Eddie attempted to reconcile with his wife Katherine (Grace Park), telling her he wanted to move back into their home but he needed to clear up one lie first. The season left audiences with that cliffhanger, but all signs point to Eddie revealing the truth about Delilah's baby to Katherine.

The end of Season 1 also saw Rome (Romany Malco) and Regina (Christina Moses) dealing with some baby drama of their own. After the couple powered through career changes and Rome's depression, it seemed like things might be calming down for them. But then, a car-shopping adventure made them realize they weren't on the same page about starting a family; Regina didn't want kids and Rome wanted to be open to it.

Meanwhile, Gary (James Roday) and Maggie (Allison Miller) fully committed to each other by the end of Season 1. Gary had been a player for most of his life, but his strong feelings for Maggie made him want to begin a serious relationship with her. During the season, Maggie had resigned herself to dying from her cancer diagnosis, but Gary encouraged her to complete a successful course of treatment. Season 1 ended with them looking ahead to what a cancer-free relationship might look like for them.

Even though a lot of drama tied up at the end of Season 1, Season 2 will likely bring even more ups and downs to this group of friends. Season 2 of A Million Little Things premieres at 9:01 p.m. ET on Thursday, Sept. 26, on ABC.