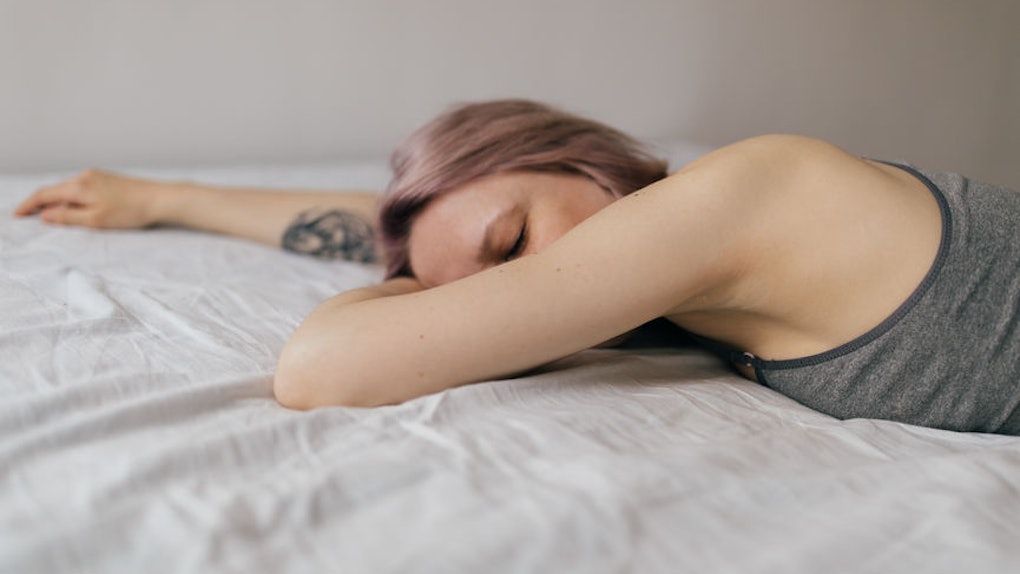 Here's Why You Feel Hungover When You Sleep Too Much, According To Experts

Sleep is a beautiful thing, but believe it or not, it's definitely possible to get too much of it. You know the feeling: You lie down in bed after a long day, and maybe you don't really intend to sleep in that much, but by the time you wake up, you realize you've been asleep for 12 hours, and you feel like you just got back from a wild bachelorette party. Your head is throbbing, your brain is foggy, and you're completely out of it. You might not know why you feel hungover when you sleep too much, but you do know the feeling is real, and that it's definitely not worth the extra hours of being wrapped up in your favorite blanket. So why does this happen, and how can you avoid it in the future?

For one thing, according to founder of Insomnia Coach Martin Reed, whether you feel icky or well-rested after a night of sleep, it all comes back to a little thing called your circadian rhythm which, according to the National Sleep Foundation, is basically a clock inside your body that regulates when you feel awake and when you feel sleepy.

When you get too much sleep, or suddenly change your usual sleep routine in some way, Reed explains, you're disrupting that internal clock, and the sudden shift can make you feel super lethargic and tired come daytime. "We use the phrase ‘sleep inertia’ to describe the feeling of grogginess that often occurs when we first wake in the morning," Reed tells Elite Daily over email, adding that the symptoms of sleep inertia can last up to an hour. And even though that groggy feeling isn't exactly pleasant, Reed says it's totally normal to experience this from time to time, even if you have a pretty healthy sleep routine overall.

However, that hungover feeling you get after a long night of sleep might be caused by something a bit more complex. According to sleep science coach and founder of SleepZoo Chris Brantner, you may be waking up in the wrong stage of sleep. "Stages one and two, light sleep, are the easiest to wake up from," he tells Elite Daily over email. "Stages three and four, deep sleep, are the most difficult [to wake up from]." In general, Brantner explains, people need to complete five sleep cycles in one night in order to feel fully refreshed come morning. A full sleep cycle, he says, takes about 90 minutes, and it consists of two stages of light sleep, two stages of deep sleep, and one stage of REM sleep, aka the rapid-eye-movement stage in which you're most likely to start dreaming.

"Getting through five cycles of sleep puts you at about 7.5 hours of sleep, right in the middle of the recommended range," Brantner says. So if you're snoozing much longer than that, he explains, you're essentially increasing the chance that you're going to wake up during one of those deeper sleep stages, which can easily cause that groggy, hungover feeling. Makes sense, right?

To prevent this from happening, Reed says the solution is pretty simple: Stick to a relatively consistent sleep schedule every day of the week, including weekends. Of course, that's easier said than done, and you're only human, so on those days when you do clock in a little too much snooze time, Reed suggests getting out of bed as soon as you're able to and going outside so you can exposure yourself to some natural light, which will help your body's internal clock readjust itself. A short walk around the block is a great way to shake off those groggy vibes because it's a really concrete signal to your body that it's time to wake up and start the day.

Now, while that groggy feeling in the morning may be relatively temporary and easily fixed, it's important to note that, according to Reed, there are legit health risks to sleeping too much on a regular basis. In fact, the National Sleep Foundation says "the risk for diabetes, obesity, headaches, back pain, and heart disease are all higher in people who oversleep." Reed recommends talking to your doctor if you habitually sleep more than nine hours a night (not just on weekends, BTW), especially if all that sleep isn't even helping you feel well-rested.

Rest assured, though, even if you feel all kinds of out of it after a long, indulgent night of sleep, those groggy feels won't last forever. And thank goodness they don't last as long as a real hangover, right?