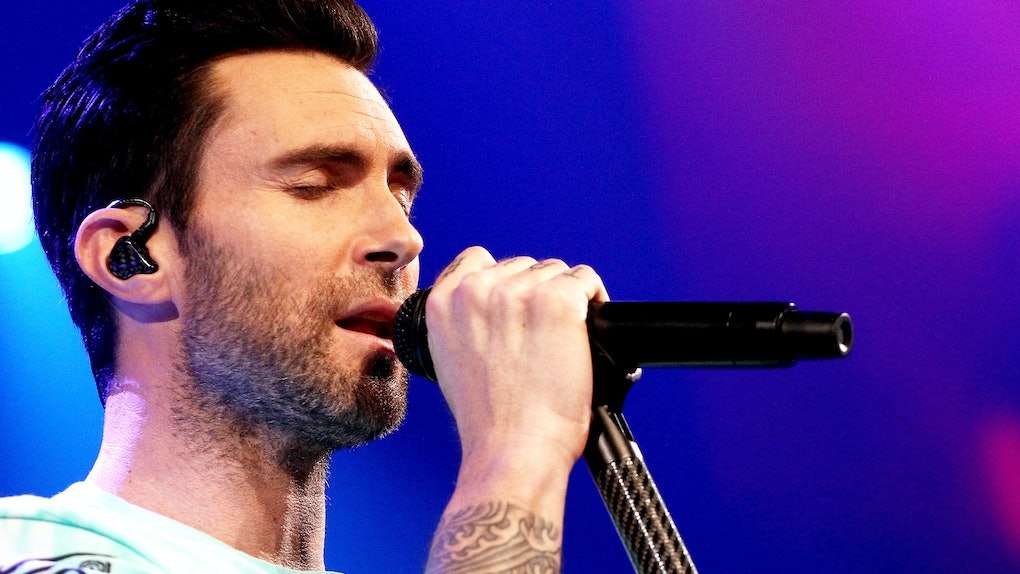 Adam Levine has been a pop music sweetheart for almost two decades now. His lightly rugged and super sleek style has disguised him as pop music's resident bad boy. However, all it takes is a close listen to his lyrics to know that the singer-songwriter and frontman of Maroon 5 wears his heart on his sleeve. Bold, handsome, and ambitious with a caring, sensitive heart is pretty much exactly what Adam Levine’s zodiac sign says about him, too. Levine is actually a Pisces-Aries cusp. which makes a ton of sense. When someone is on the cusp of two seasons, they usually take on a blend of characteristics of both signs.

Since Levine's birthday is Mar. 18 he is a Pisces. However, because Aries season starts on Mar. 21, the cusp for the two signs is between Mar. 17 through Mar. 23. Pisceans are (almost infamously) known for their emotional, vulnerable, sensitive nature. This isn't instantly noticeable about Levine, what with his wardrobe of sleek black leather jackets, skinny jeans, and stylish hairstyles. This is where the cusp influence comes in, as Aries are known for their boldness, creativity, passion, and all-around bad*ssery.

Something that both Pisceans and Aries have in common is that they are super passionate partners and lover. This is super apparent when you look at Levine's marriage with model Behati Prinsloo. There are so many ways that Levine shows his love and care for his wife and they're really classic examples of how caring and passionate someone with a Pisces-Aries cusp can be.

She is present in his art.

On July 19, 2014, Levine and Prinsloo got married in Mexico. Their friend, actor and director Jonah Hill, officiated the wedding of 300 guests. On July 29, 2014, Levine released the single "It Was Always You" which is likely a tribute to Prinsloo. The lyrics include, "All my hidden desires finally came alive/ With a different kind of feeling/ Now I know that my heart wasn't satisfied, satisfied/ It was always you." If that's not the most Pisces way of confessing your love to someone, I don't know what is.

He is her biggest fan.

In an interview with Ellen DeGeneres, the moment DeGeneres mentions that he's married to the beautiful Prinsloo, he shouts and claps before saying, "Once again, she blows me away at every turn. She's the best person ever, ever." He is so enthusiastically supportive and appreciative of her during interviews that it shows just how much he cares.

Almost every major interview that Levine has done in that past five years with hosts like Ellen DeGeneres and Jimmy Kimmel have centered on parenthood and marriage with Prinsloo. Levine told Kimmel that he prepared for the 2016 birth of his second daughter by making sure to eat before his wife went into labor so that he didn't faint. It was clear throughout his story that his priority is being there for his wife and family.

In another interview with DeGeneres, Levine discusses his family and upcoming tour. He shares that the family will be coming with him on tour, which will be no small feat for a family with an infant and toddler. He said that he is excited for them to see the world, and adds, "I love being a dad and it's so much fun." When DeGeneres asked about Prinsloo's upcoming birthday, he said that he couldn't say anything because it was an ultimate surprise. He clearly has the ambition of an Aries when it comes to planning, and the loyalty of a Pisces when it comes to including his family every step of the way.

It's clear that Levine is super committed and in love with Prinsloo. It's also super clear that he is a Pisces-Aries cusp in his art and the way he shares about his family. His performance with Maroon 5 this Super Bowl Sunday is bound to be a great time, too.