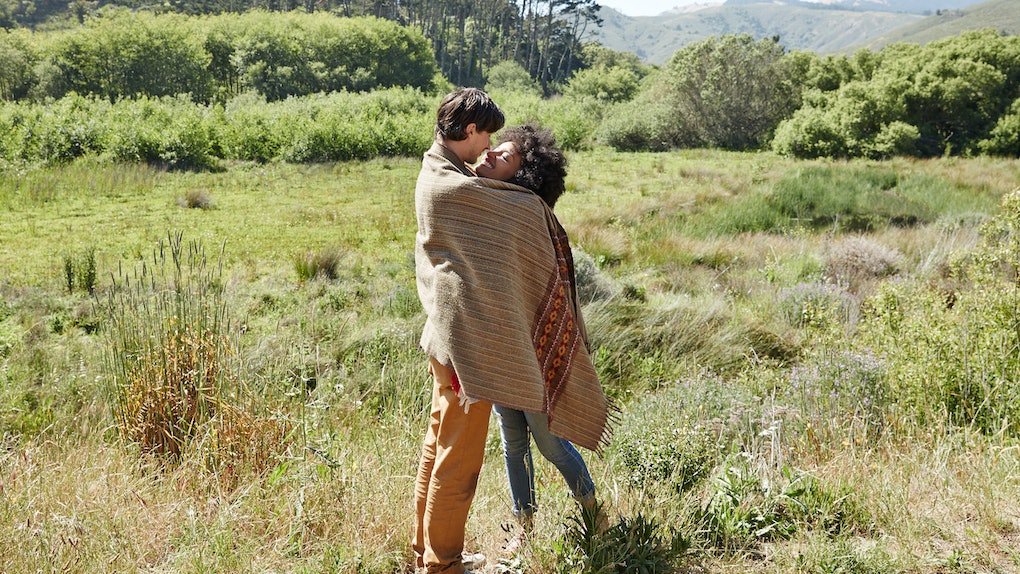 Here's How To Protect Yourself From STIs During A Public Quickie, Because Safety Is Sexy

If your love life was a '90s movie, you'd lock eyes with a cutie at some sort of town bonfire, where you'd whisper that you're feeling some sparks of your own before having sex on a beach. Of course, outside of the movies, sometimes spontaneously getting it on outside happens. And whether you and your boo just couldn't wait to get home from your hike or your night took on a sexy surprise ending — knowing how to protect yourself from STIs during a public quickie can be a great way to mix some safety in with your sexy, no matter where you find yourself.

Regardless of whether your outdoor sexcapades were totally spontaneous or you plotted for a public quickie, sometimes the best bedroom activities happen outside of the bedroom. "A quickie can be adventurous sex, whether it's with a human you met 30 seconds ago or lifetime partner," Dominnique Karetsos, resident sexpert at MysteryVibe tells Elite Daily. No matter who you're doing and where you're doing it — having the safest sex can often help you have the best sex.

Karetsos shares that the first thing to do before engaging in a public quickie is to check in with your partner about your respective health statuses. "Are you sleeping with other people and have you been recently tested?" According to Dr. David Bell MD, MPH associate professor of pediatrics at the Columbia University Irving Medical Center, putting off these harder conversations until after you've gotten frisky is unfortunately pretty common. "Most young people don't talk about that seriously until after the fact, so it defeats the purpose, if you’ve already been doing something," Dr. Bell tells Elite Daily. If talking about sexual health feels awkward or even a little intimidating — if you're trying to have penetrative sex during your public quickie, being transparent before going at it is crucial in keeping everyone healthy and safe.

As the experts share, when it comes to a public quickie, (as well as penetrative sex of whatever length in any location), using barrier contraceptives (like externally worn condoms, insertable condoms, or latex "dental" dams) is the only way to protect yourself from STIs. Of course, if you don't have contraceptives around, Karetsos shares that there are plenty of ways to get totally hot while staying totally safe during a public quickie. "You may want to avoid penetration or oral sex," Karetsos says. "Try stroking and playing with erogenous zones through fabric. Tantalize all the senses, try talking dirty, and indulge in a lot of kissing – you may surprise yourself and discover pleasure zones you never had." If you don't have protection but still want to get it on (#relatable), masturbating together, or otherwise sticking to more hand play and dirty talk can be a great way to turn up the heat while turning down the STI risk factor.

Of course, if a public quickie that includes penetration sounds pleasurable to you, Dr. Bell shares the importance of keeping contraceptives with you when you're on the go. "It's good to have the possibility of having a condom on you rather than not having a condom on you," Dr. Bell says. "Keeping a condom in a wallet keeps someone prepared for a potentially unplanned sexual event." Although if you've heard mixed advice about keeping condoms in your wallet, you may wonder how effective the contraceptives you have on you are. "The problem with keeping a condom in a wallet is that many people keep their wallets in the pockets, close to the body. The latex in the condom can degrade more quickly at this heat," Dr. Mary Jane Minkin, OB/GYN at at Yale-New Haven Hospital and clinical professor at Yale University School of Medicine, tells Elite Daily. "It's much better to use a condom that partially degraded than nothing at all, but if you can keep a condom safe and nearby, being stored at room temperature, that would be ideal."

Dr. Minkin and Dr. Bell both agree that using a contraceptive that's been in a wallet is better than having unprotected sex. Still, both experts attest that if a public quickie is in your future, you're better off keeping your contraceptives in a bag or backpack, or somewhere else that's not close to your body and at risk of friction. Dr. Bell also shares the importance of keeping an eye on the condom's expiration date, and changing an unused condom every few months. "An unused condom in the wallet over time can degrade its viability. So, to make sure you have protection, you should change it with some degree of regularity, say every two months or three months."

As Karetsos says, if you and your boo are planning on using contraceptives the night (or day) that you pack them, keeping a condom in your wallet for a few hours shouldn't affect its fortitude. If you're looking to keep yourself open to the possibility of a public quickie, storing contraceptives away from your body is a better choice. "Condoms and dental dams need a cool, dry place so the latex doesn’t weaken," Karetsos says. "As a long-term storage option, an empty Altoids tin or your nightstand is a much safer bet. Whatever you do, do not double up on condoms. Two shoddy condoms don’t make a perfect one!"

Of course, in the event that a wallet condom, expired condom, (or honestly any condom) does break during a quickie, Dr. Bell shares that you may need to discuss emergency contraceptives, like Plan B aka "morning-after pill," and getting tested for STIs. And while using a contraceptive that's been in your wallet or say, a hot car, is better than using nothing, if you sense a public quickie in your future, it's best to be as prepared as possible, by keeping a condom in a bag or small container nearby.

Although you may be already out the door with your D.I.Y. condom-box-from-an-Altoids-tin in your leather tote, if you're thinking about getting it on in public, you need to be mindful about when and where. While it may be totally hot, in most states, having sex outside is also is totally illegal. Though the laws do vary, having sex in public is often considered a misdemeanor, sometimes classified as a lewd or indecent behavior, and can even be considered indecent exposure (yikes). Apart from basic sexual health, a public quickie can be some risky business. So, if you're dead set on having a public quickie, check in with your state's laws and be considerate when picking an isolated spot.

When you and a hottie are about to have sex, it's not always easy to ask the hard questions. While keeping contraceptives on you is a great way to prepare yourself for any sexual adventure — as all things in sex, placement matters. Keeping condoms in your backpack or keeping a couple dams in your purse can be a great way to protect yourself, while ensuring the viability of your contraceptives. If you're unsure about a condoms expiration or reliability, sticking to hand stuff, sensual touching, and dirty talk can be a great way to get frisky without risking anyone's health. Of course, no matter where you are or who you're getting it on with, consent is the most important part of any sexual adventure. And if you're doing what you want to be doing, a protected public quickie can really hit the (G)spot.