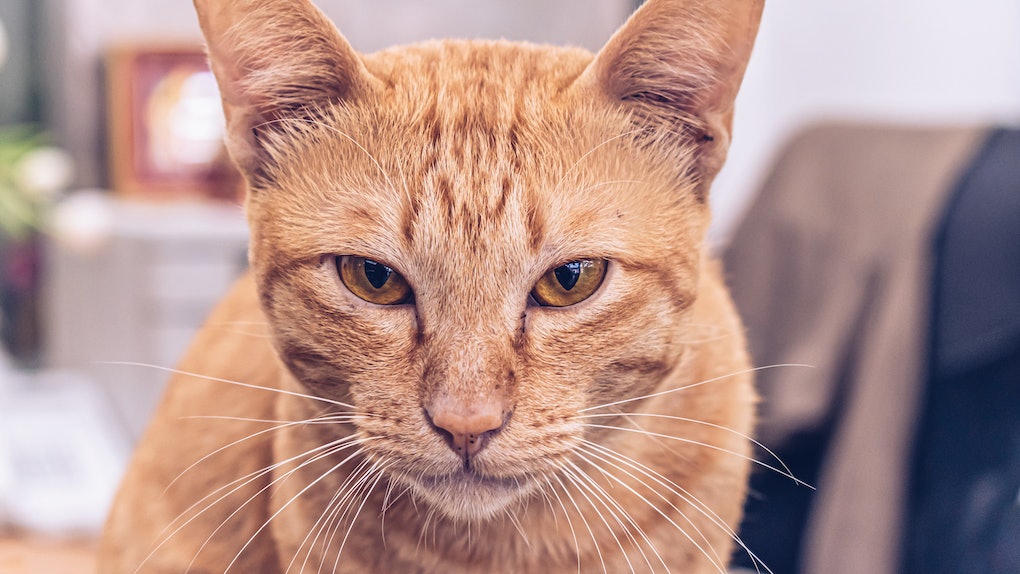 ICYMI, there's a new brand of cat videos that have been taking over social media. People are trying out a new filter that transforms them into a cat — and their four-legged friends don't know what to make of it. If you want to try out the feline makeover for yourself and get a laugh while you're at it, here's how to get a cat face filter on Snapchat. Trust me, your kitty's reaction will be priceless.

If you've been following along, you might have seen a cat filter that's been taking over the internet in recent days. While filters inspired by your furry friends are nothing new, with Snapchat and Instagram regularly debuting versions of cat, dog, bunny, and bear iterations, the newest filter went viral on Nov. 16 for a hilarious reason — your feline companion is almost guaranteed to freak out when he or she sees your transformed face with fur and whiskers, as several owners hilariously demonstrated on TikTok. In many of the videos, the peoples' cats can be seen looking visibly shocked once they see their humans transformed into cats, and they can't resist looking up to make sure that the change isn't happening in real life.

While the original app that does the feline-inspired transformation seems to be, according to The New York Post, the Douyin platform — which is the same as TikTok but exclusive to China — a similar version rolled out on Snapchat that's simultaneously terrifying and hilarious. The best part? I have a feeling it'll freak your kitty out as much as the original.

To access the Snapchat cat face Lens, I'd keep in mind you won't be able to find it in the main Lens Carousel until you try it. To add it to your Lens arsenal, you'll want to open up the app, go to the Lens Carousel, and then tap the smiley face to the right. You'll then access the Snap Lens Explorer by tapping the magnifying lens, after which you'll want to search "cat" at the top.

Once you find the Lens by Joe Speaker, which was seemingly the first cat face filter like this available on the platform, you can select "Try Lens" and play around with it. After you opt to try it, the Lens will be in your carousel until you get rid of it, so you can access it whenever you want to. One of the first U.S.-based cat Lenses I saw was from @jesshipma on Nov. 18, where she sported the Snapchat version of the filter. There's also a new cat face Lens by Digi Zone on Snapchat, which fits a little more like the Douyin filter. You can also find in the Snap Lens Explorer by searching "cat."

The Douyin filter is a little more advanced, with the cat mask more naturally fitting on the user's face, but the Snapchat version should do the trick as well.

The best part of this viral lens is that there's no telling how your kitty is going to respond to seeing you transformed into a cat, so I'd make sure to capture the moment and share it with the rest of us.

Editor's Note: This article was updated on Dec. 16 to include additional Lenses available on Snapchat.

This article was originally published on November 20, 2019