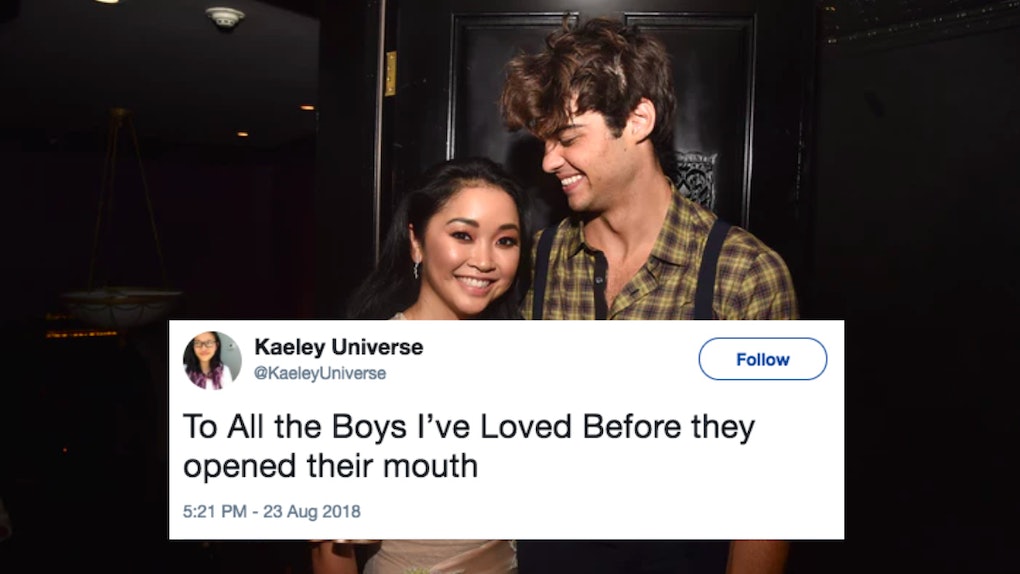 Undoubtedly, there are many factors that justify all the hype around the new Netflix original flick To All the Boys I’ve Loved Before — teenage romance, crafty dialogue brimming with heart, killer ‘90s fashion, and profound messages about self-confidence and identity. Oh, and Noah Centineo. Need I say more? Before long, girls and guys of all ages and backgrounds were chiming in on a To All The Boys I’ve Loved Before Twitter meme. Fans have certainly embraced not only the film itself, but also the title — cleverly turning it into a trending flurry of tweets reflecting their own dating experiences.

The film follows a young woman, Lara Jean, who pours her heart out into a series of secret love letters, which then somehow get mailed to each of her five crushes. One of the guys she has feelings for, Peter, responds by pretending to date Lara Jean in order to make his ex jealous, but ends up falling for her IRL. In keeping with the theme of the film, Netflix decided to open up the conversation on Twitter, posting a call for love letters from its followers on August 21st. Soon, fans had taken matters into their own hands, using the film’s title to tackle such hot topics as sexuality, heteronormativity, toxic masculinity, and more.

Some of them are fall-off-your-chair funny. Some of them are just so damn relatable. And some of them went down a pretty dark path, TBH. As it turns out, when you’re given free rein to say whatever you want to all of your former flames, it gets real — fast. Regardless, it’s pretty hilarious to see how people are making a statement by making the film title their own.

Wondering what people have to say to all the boys they’ve loved before? (Spoiler alert: They didn’t hold back.) Here are some of the best tweets from this increasingly popular meme.

Real talk. If you could say something to all the boys you've loved before in 280 characters, what would your message be? The Twittersphere certainly seems to have a lot to say. (Side note — if you've already seen the flick, you're bound to relate to some of these tweets from viewers). It's no surprise, given that there was a flurry of tweets surrounding one scene in which Peter heroically moves the popcorn out of the way before a pillow fight escalates.

If we're lucky, fans will keep this meme rolling in the days to come. And seeing as fans are already demanding to know whether there will be a sequel, there's a chance these trending tweets won't die out so quickly. Because honestly, we could use some levity after the (mostly happy) tears that came from watching that heart-wrenching Netflix romance.