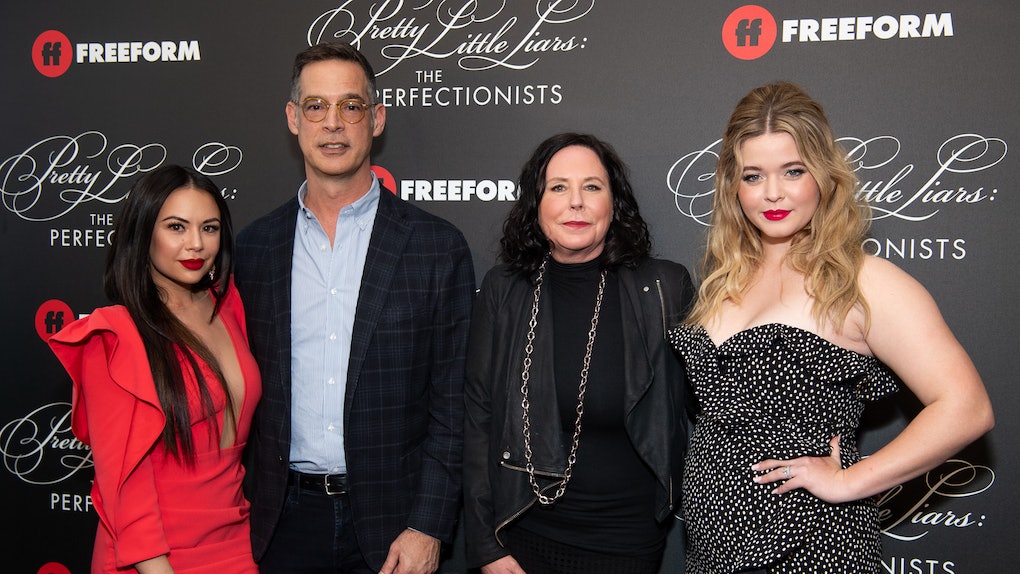 Here's Everyone The Cast Of 'The Perfectionists' Is Dating IRL, So You Can Get Your Fix

Drama, mystery, talented actors? Is there anything The Perfectionists doesn't have? True to its name, the characters are perfect (as perfect as the characters in its sequel were pretty and lying). As with any good show, I immediately became obsessed with the personal lives of the cast members, so I researched everyone the cast of The Perfectionists is dating. It turns out that what happens in Beacon Heights doesn't stay in Beacon Heights (which is to say, the actors don't actually live there when not filming the show — something that truly shocks me every time I learn it about a TV show, especially those set in fictional towns).

I was delighted to learn about the rich love lives of the actors on The Perfectionists. After all, they deal in such doom and gloom on the show, I'm glad they get to kick back and have fun. I only wonder if they've ever pulled a Taylor and faked a death to get out of a relationship (at least, that's my theory on what happened to Taylor — no spoilers!). But once the dust settles and everyone knows who killed who and who's really dead and who's lying and who works for the FBI, there's still the most important question of all — who are they all dating?

Read on to find everyone the cast of The Perfectionists is dating IRL.

In December 2015, Pieterse got engaged to her boyfriend Hudson Sheaffer, and they were wed in 2018 in a castle in Ireland — romantic much? Or the site of a possible murder, I don't know, I watch a lot of The Perfectionists.

The former Aly & AJ star and singer dazzles on The Perfectionists, and in her real life too. She is rumored to be single, so some lucky person may come in the future to steal her heart.

Parrish met her partner Chris Long (a chemical engineer — sounds like maybe he could decode some of the FBI evidence on the show) in 2016. They were engaged in 2017 and married in 2018 in Hawaii — look at that, back-to-back years of love. I can only imagine what 2019 will bring for the happy couple!

Park shared a photo of her and her new beau, football player Nat Behre, in early 2019, and fans were here for it. She's described him as her number one supporter, and honestly, why wouldn't he be? She's incredible, both on the show and IRL!

Erin split from her former partner, Logan Von Luedtke, and she's now focusing on her career full time. And thank goodness for that — she's amazing on The Perfectionists, and I love that she's investing in herself.

Rutherford began dating screenwriter Chiswell Langhorne mid-2018. A TV star and a screenwriter — is there a better Hollywood couple? Of course, they live in NYC, but that doesn't mean they're not showbiz #goals.

It seems like the cast of The Perfectionists has gotten busy outside the show, too. What's a little murder-mystery without a whole lot of romance? Both on and offscreen the cast dazzles, so consider me in for following their love lives. After all, the show only airs once a week, and I need my fix more often!

More like this
Did Pete Davidson Confirm He's Dating Phoebe Dynevor? Here's Why Fans Think So
By Corinne Sullivan
Clare Crawley's Tweet About Matt James Reportedly Dating Grace Amerling Is Shady
By Candice Jalili
When Are Ariana Grande & Dalton Gomez Getting Married? Here's The Reported Tea
By Corinne Sullivan
Stay up to date