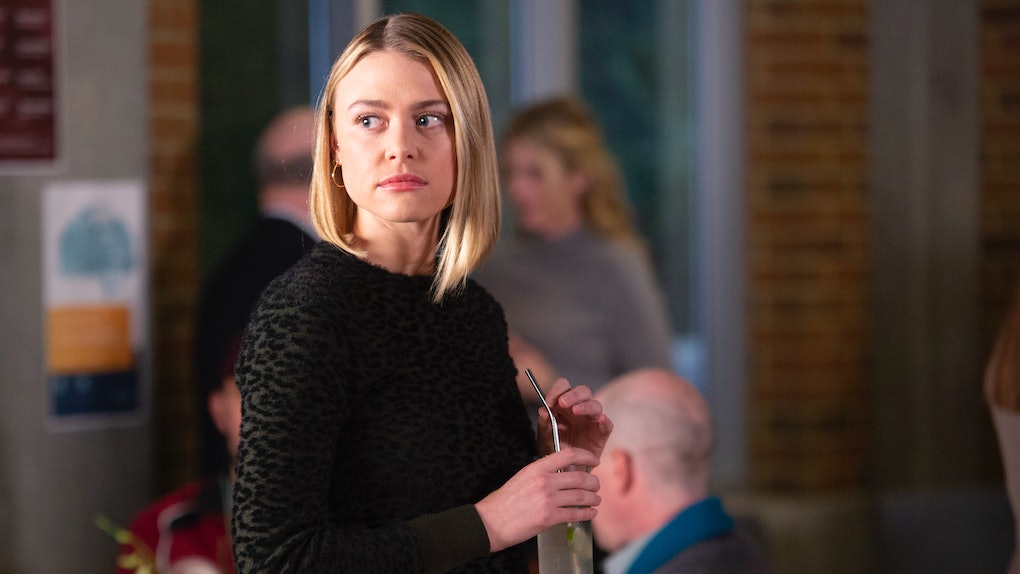 It turns out that debonair British guys are just as shady on The Perfectionists as they were on Pretty Little Liars. The most recent Perfectionists episode revealed that Caitlin's boyfriend Jeremy may be hiding a major secret connected to the Hotchkiss family, but we'll have to wait and see if Jeremy is trustworthy. Caitlin and the rest of the gang may have other issues keeping them busy, and the Perfectionists Season 1 Episode 9 promo promises things are about to get wild before the season finale. Let's break down what to expect.

ICYMI, May 8's "Hook, Line and Booker" involved Ava (Sofia Carson) hacking Jeremy's (Graeme Thomas King) computer to retrieve Dylan's (Eli Brown) plagiarized cello recording. She managed to find the piece, but she also noticed heavily encrypted files that were a little out of place on a personal laptop. The mysterious files left Caitlin (Sydney Park) wondering what Jeremy actually did at his job with Hotchkiss Technologies. She tried asking him, but he danced around details, only saying he taught employees how to use a certain kind of software.

After Jeremy suspected that Caitlin had messed with his computer, Caitlin followed him to work, but he ended up at a lake instead. She watched as he drilled through his computer and tossed it into the water, and when she tried to investigate his car, Jeremy popped up behind her. Almost looking like he was in a trance, he told her to get into the vehicle, but the episode ended before Caitlin could respond.

The promo for May 15's "Lie Together, Die Together" doesn't feature much of Jeremy and those hypnotic eyes, but it certainly hints that he may have a part in the Beacon Heights drama that's about to ensue. The teaser opens with Ava musing, "All that pretending, needing to be perfect — that's what got Nolan killed." Images of the Perfectionists with Nolan (Chris Mason) are literally shattered before Caitlin is seen driving with Jeremy, who says, "He got what he deserved."

Although Jeremy appeared on the quad as Nolan's body was found in the pilot episode, the idea that he was responsible for the murder isn't impossible, and this episode may shed some light on his role in those events. The preview puts focus on the figure that killed Nolan, followed by Caitlin approaching a speedboat as she says in a voiceover, "He was following Nolan, stalking him." Is she talking about Jeremy?

Meanwhile, Claire (Kelly Rutherford) is concerned about history repeating itself with Taylor (Hayley Erin), who is working on her Beacon Guard system when she gets a notification that an intruder is nearby. Following the Perfectionists' success in recording proof of Dana's (Klea Scott) corruption, it also looks like Claire receives the info and isn't happy about it. "They're trying to dig themselves out of a hole," she tells someone. "That hole gets deeper and darker."

That's definitely accurate, as the rest of the preview features characters crying, facing down guns, and getting up to mischief while in fancy dress. The teaser's action hits a peak when Taylor, Ava, and Dylan approach something off-camera that prompts Taylor to whip out a gun and scream, "Stop." This definitely isn't sweet and idyllic BHU anymore.

On the night of a school gala, the gang is convinced they know who killed Nolan and set out to prove it. However, Dana continues to complicate their lives by exposing a critical secret between the Perfectionists.

The Perfectionists have already proven their solidity when it comes to Dana trying to destroy them, so what exactly threatens them this time around? Plus, is Jeremy definitely the stalker Caitlin mentions as well as the person at the other end of Taylor's gun? We'll have to see how the story takes a turn before The Perfectionists' season finale.

Season 1 of Pretty Little Liars: The Perfectionists continues on Wednesday, May 15, at 8 p.m. ET on Freeform.