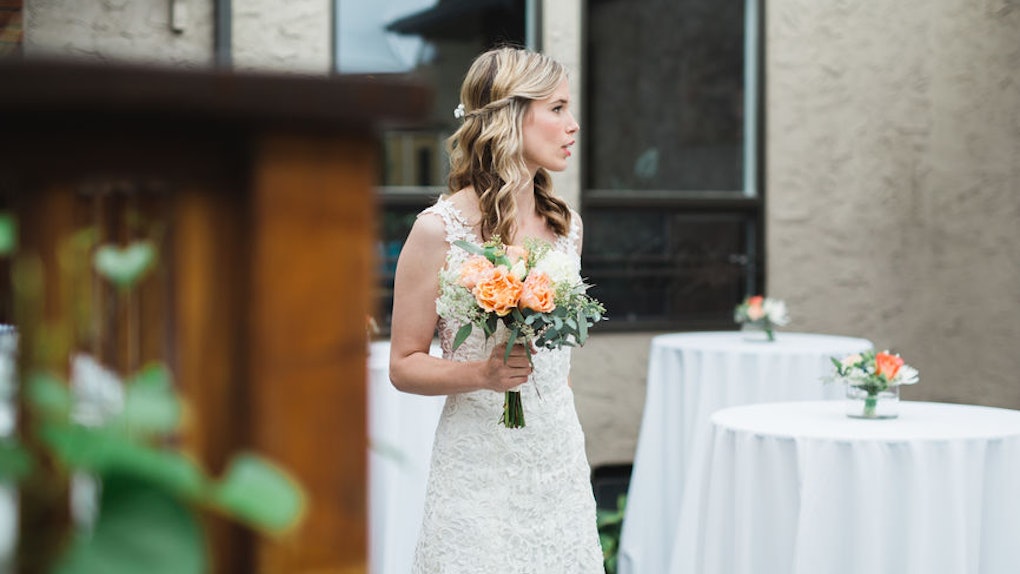 Before I got married, I would tell people about headaches I'd encountered in the wedding planning process, and they'd all respond the same way: "Your wedding day is the happiest day of your life, and on the day itself, you'll forget about all of the drama leading up to it." No one seemed to think there would be any drama once the planning was finished — the day you say 'I do' is supposed to be magical no matter what, right? Even if you've never tied the knot, you probably know that's not true, and apparently, hating part of your wedding is something plenty of people have experienced.

TBH, my day was pretty magical. Sure, my caterer showed up two hours late because he hit a deer with his truck, and my sister smeared lipstick on my chin during our "getting ready" photoshoot, and our photographer tripped while taking bridal party photos and trampled the bouquets, but it was still a pretty perfect day. Of course, my drama seems like nothing compared to the Reddit users that contributed to the Ask Reddit thread about worst wedding snafus. If there is any part of your wedding day that you're unhappy with, you might feel better after reading these disastrous wedding stories.

My mom invited her cousin who has a bit of a drinking problem. He was completely wasted by our first dance and decided to join in.

My sister and one of my best friends both mysteriously disappeared. A few minutes after it was noted that they were missing, they showed up looking embarrassed and it was clear that they’d been hooking up. Now, my wedding was almost two years ago, and I only just learned about a month ago that my maid of honor had walked in on these two ladies going at it in the bridal suite and absolutely ripped them a new one, demanding that they get dressed and return to the reception. This was impressive because (1) MOH only met both of these girls on a handful of occasions, as she lives on another continent, and (2) (as I said) I only JUST found out about it.

Outdoor wedding. In the middle of June, so hot outside. As it starts getting close to the start time for the ceremony the Justice of the Peace doing the wedding still hasn’t shown.

Everyone is now hanging out waiting. Everyone is dressed up and just want to get out of the heat. An hour goes by. We are embarrassed, and apologizing to people for keeping them while desperately trying to get a hold of the JotP.

Just when we are about to call the whole thing off here comes the JotP across the park, strolling, in no hurry.

No apology, no explanation of why she is late. She’s genuinely surprised that we are angry with her. On top of that she has the gall to ask for us to cut her a check for her services up front before she will do the ceremony.

My MOH is married to a groomsman, but he wasn't the best man, so his wife had to walk down the aisle with another man. He's very jealous so he wasn't happy. Then he found out that the MOH and BM were going to drive us to the reception hall in our Chevelle. Well that started a huge fight. We had commissioned the photographer to take photos of all the married couples in the wedding party (our ushers were married to my bridesmaids) as a gift from us. We had them framed and everything. Guess who didn't get theirs taken? Yup. They proceeded to fight all night. He refused to let her dance with the BM long enough for one photo. It was awful.

My husband’s uncles all pulled me away to dance with me during what was supposed to be the bride and groom’s first dance. And I didn’t get to dance with my husband to any of the songs I requested because people wouldn’t stop talking to me. And I don’t mean “hey, congratulations!” I mean like people stopping me and standing there trying to have a conversation with me or give me “marriage advice” I didn’t ask for. I know it’s not that bad, but I’m still pretty upset that I didn’t get to dance with my husband at our wedding.

DJ had no clue how to keep a party going. He started the wedding party dance without warning, and everyone but my wife and best man we're outside smoking. And what I thought was the worst: he couldn't find David Bowie's "Golden Years" so he chose "Let's Dance" instead which is, ironically, a pretty lousy dance song. Oh, and the SUPER slow live version of "Friend of the Devil" was just sad.

A well-known, well-liked lady in our congregation apparently had an accident while living in her home that was being renovated, sometime during the day, and when people couldn't get hold of her somebody went to the house and found her dead of obviously not natural causes. They tried not to tell everybody yet, but it was pretty obvious something was up when lots of people were huddled in a corner crying. Many left and we had a pile of food left over. So that happened.

My best man was delayed in an airport in Chicago due to thunderstorms. He was nice enough to call me every hour with an update on his status. At 2 am I said thanks for the updates but please for the love of god stop calling.

My best man at my wedding was someone I had never met before (friend of the bride).

I was all set in to ride in on a white horse. I'd ridden him several times beforehand and he was great. On my wedding day, the owner rode him around the grounds while I got ready, and he was great. He was mildly sedated to prevent any craziness, but that didn't work.

I go to get on him and he flips out. He got scared of my dress, snapped his halter off the trailer and went galloping around this field. This was twenty minutes before the wedding was due to start.

The wedding guests, for the majority are not horse people. I'm useless in my huge dress and heels. It takes everyone another twenty minutes to catch him.

So remember: No matter how wrong something may go on your big day, just know that you will live to tell the tale (and maybe even laugh about it someday).