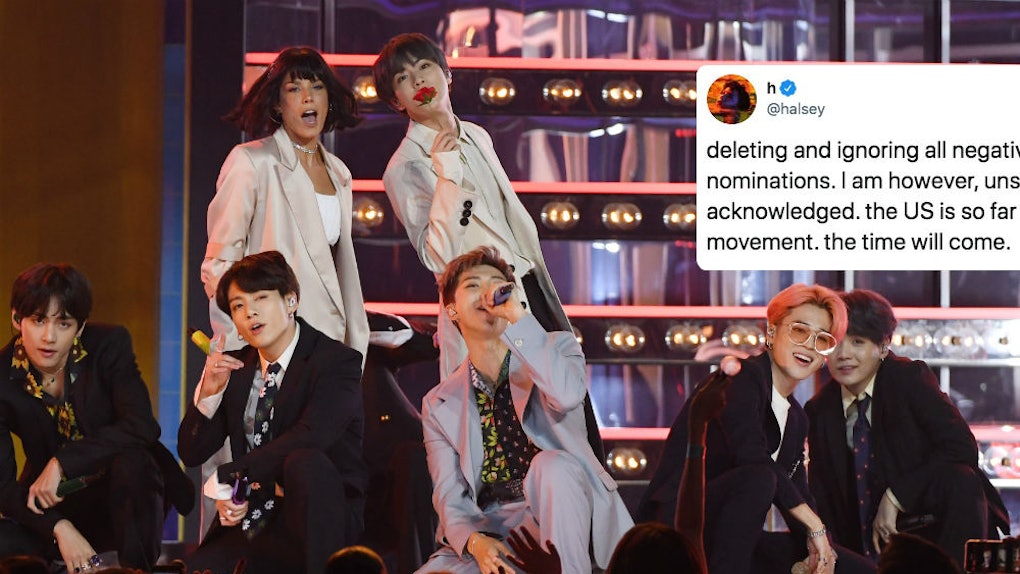 Halsey proved she's a loyal BFF and committed member of the BTS ARMY on Nov. 20, after she and BTS were both snubbed for 2020 Grammy nominations. The "Nightmare" singer shared her thoughts in a series of tweets, spitting some major truth about music's biggest night. Halsey's reaction to her and BTS' 2020 Grammys snubs is mature, insightful, and gave her and BTS' disappointed fans some much-appreciated perspective.

Halsey, whose first No. 1 single on the Billboard Hot 100 Chart, "Without Me," was one of the most popular songs of 2019, kicked off her series of tweets by addressing the lack of Grammy recognition for the hit track.

"My fans please do not waste your anger or frustration," she began. "i see a lot of you are upset. of course im sad too. none of it matters. literally none of it. you’re here. im here. + everything is gonna stay exactly the same and without me is still a super tight, record breaking song." She subtly hinted that she's not surprised at the snub because "this is how it goes every year."

However, it wasn't just her own snub from the Recording Academy Halsey felt the need to address. She posted a sweet message in support of BTS, who she collaborated with on their song "Boy in Luv."

"Deleting and ignoring all negativity," she wrote. "BTS deserved many nominations. I am however, unsurprised that they weren’t acknowledged." Having the same feelings as many ARMYs, she added, "The US is so far behind on the whole movement. the time will come."

But Halsey didn't let her frustration stand in the way of celebrating her fellow artists who were nominated.

"Congrats to the nominees," she tweeted. "So much great music nominated this year. definitely see a lot of my friends and colleagues missing from the nom lists, but the music speaks!"

Billie Eilish was one artist Halsey was particularly happy to see recognized. "Ps super happy to see @billieeilish crushing it," she gushed. "I wish I had someone like her to look up to when I was growing up. she’s unstoppable."

Halsey's emotions left her exhausted, apparently. "Going back to bed. Again, love you!" she tweeted, concluding her vent session on a positive note.

Just because Halsey didn't walk away with any 2020 Grammy doesn't mean she won't snag any more awards before the year's out. She's up for three American Music Awards, so she definitely stands to get more much-deserved recognition for the epic music she dropped in 2019.

More like this
Olivia Rodrigo's Reaction To Getting Her First Parking Ticket Was Priceless
By Brandy Robidoux
These Tweets About BTS' 'Bang Bang Con 2021' Sum Up The Epic Performance
By Cianna Garrison
With 'Like Water,' Wendy Found Her Biggest Cheerleaders In Her Red Velvet Bandmates
By Michele Mendez
Stay up to date