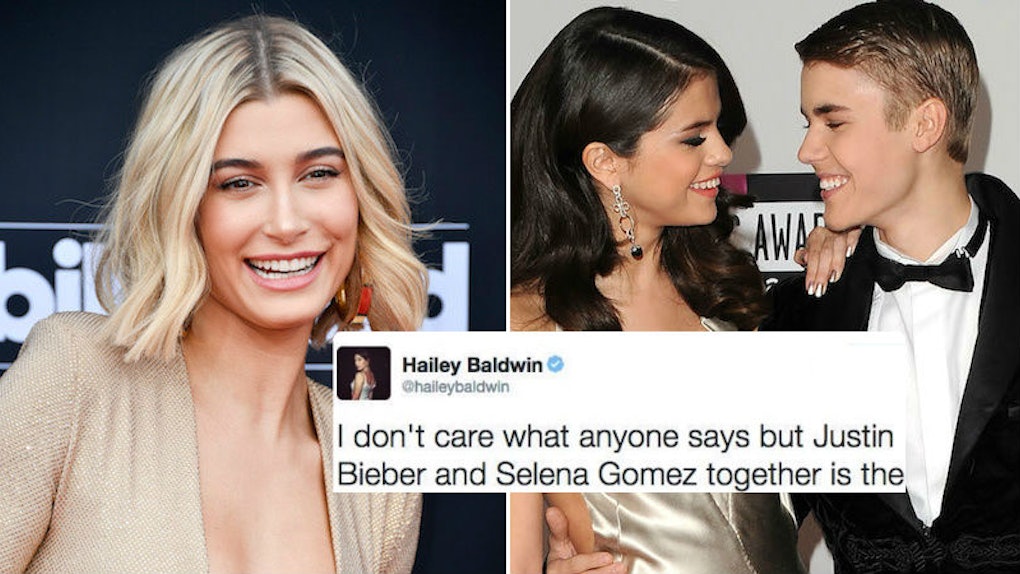 Look, I know we've had a whirlwind of a weekend. After TMZ broke the big news on July 8 that Justin Bieber and Hailey Baldwin were engaged, it almost seemed too surreal to be true. But then, on Monday, July 9, Bieber and Baldwin both confirmed on Instagram that the proposal was the real deal, and I nearly lost my damn mind, fam. There are so, so many questions going on in my head. How did this happen so quickly? When did Justin go ring shopping? How does Selena Gomez feel about all of this? We *kind of* know the answer to that last question (and it basically seems like she DGAF, so that's good), but surely, Hailey must have some feelings towards Selena, right? She was Justin's on-again, off-again girlfriend for many moons, so surely there must be some jealousy? Well, according to Hailey Baldwin's tweet about Justin Bieber and Selena Gomez, it seems that she actually shipped Jelena back when they were an item, and I'm sort of loving it, TBH.

But first, let's backtrack just a bit before we stroll through the days of yesteryear. And, for those of you who are just tuning in to the celebratory news, consider this your recap: According to TMZ, Justin Bieber proposed to Hailey Baldwin on Saturday, July 7, while the pair were vacationing together in the Bahamas. Elite Daily reached out to Justin Bieber and Hailey Baldwin's representatives for comments on the reported details of the engagement, but didn't hear back at the time of publication.

An eyewitness told the media outlet that Bieber's security team asked everyone to put their phones away just before he popped the question. While there wasn't any actual confirmation from Bieber or Baldwin, Bieber's dad shared a photo of his son the next day on Instagram, writing the caption, "@justinbieber Proud is an understatement! Excited for the next chapter!" so it seemed like something had to be going on.

We didn't have to wait too long for confirmation from the happy couple, though, because on Monday, July 9, the Biebs shared a photo of himself with his fiancé on his Instagram account, writing that his "heart is completely and fully" hers, and that she is "the love of his life," and he "wouldn't want to spend it with anybody else."

If you're like, "Well, technically he could just be professing his love, and not exactly an engagement," now would be a great time to add that, in his caption, he also wrote:

Gods timing really is literally perfect, we got engaged on the seventh day of the seventh month, the number seven is the number of spiritual perfection

So, yeah. That settles that.

On the same day, Baldwin took to Twitter to confirm their engagement as well, writing,

Not sure what I did in life to deserve such happiness but I am so utterly grateful to God for giving me such an incredible person to share my life with! No words could ever express my gratitude.

And just like that, we've got another quickie romance-filled engagement on our hands.

So now that we've completely settled the score on that, it's time I brought you along for a ride into our past. In the late evening of July 9, popular Instagram account @TheCut shared two screenshots of tweets written by Hailey Baldwin back in 2011, showing her unwavering support for — yep, Justin Bieber and Selena Gomez's relationship.

I don't care what anyone says but Justin Bieber and Selena Gomez together is the definition of a teenage dream! #word

And, in case you were still doubting Baldwin's loyalty to the young couple, the second tweet, written on May 27 that same year, said,

While we're not certain that Hailey still feels this way about Jelena (I'm guessing she doesn't, though), it's nice to see that she was in their corner back when they were an item. Plus, this was before she and Bieber developed a romantic relationship together back in 2014. That romance was short-lived and the two simply became "just friends." In an interview in May 2018 with The Times, Baldwin confirmed that she and Bieber were still in the friend zone and had no romantic feelings whatsoever. She said,

I'd never been through a high-profile relationship like that. But it brought both of us to the realisation that we just work much better as friends. He's somebody I really cherish. Now it's a very mature situation. It's good.

I guess we can all agree that relationship statuses change very quickly in Hollywood, yes?

Either way, a big congrats to the newly engaged couple. Even though things seem to be going pretty fast, it's clear that these two know what they want in life, and we should just be happy for them. Cheers to Jailey, everybody!