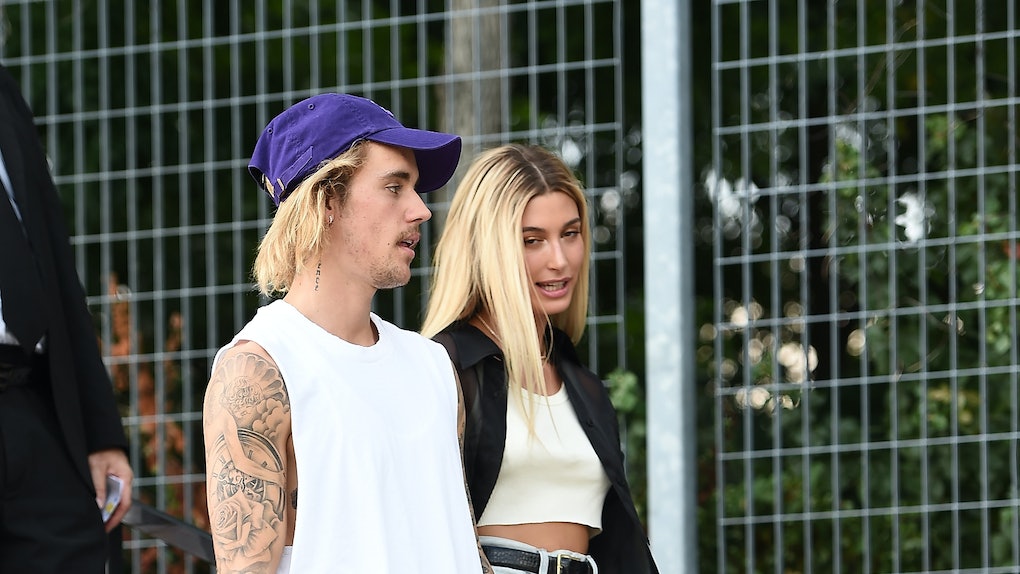 Hailey Baldwin Changed Her Last Name To Bieber On Instagram, So They're The Real Deal

It looks like Hailey Baldwin is also making her reported marriage with Justin Bieber Instagram official. Hours after the Biebs confirmed that there was one less lonely girl in the world by calling the model his wife, Hailey Baldwin changed her last name to Bieber on Instagram. Elite Daily reached out to Baldwin's representation to inquire if Baldwin has also legally changed her name to Bieber, but did not hear back at the time of publication.

On Friday, Nov. 16, the model appeared to end months of speculation about her and Bieber's marital status with a subtle but meaningful gesture: Changing her moniker on Instagram. Baldwin's handle has now been switched from @HaileyBaldwin to @HaileyBieber and her Instagram bio also lists her name as Hailey Rhode Bieber.

The super sweet move came just hours after the "Love Yourself" hitmaker finally put the rumors to rest with an Instagram photo of Baldwin. "My wife is awesome," he captioned the image, which showed the newlyweds enjoying a candid and totally playful moment on the street. TBH, it was super cute and the perfect way to officially reveal that Baldwin had gone from a Belieber to a Bieber.

While this is the first time the couple is officially making things Instagram official, there have been some pretty major hints along the way. One day earlier on Thursday, Nov. 15, Baldwin was spotted wearing a denim letterman's jacket with "Bieber" printed on the back in huge letters. Then there was that PDA-packed Instagram post shared to Bieber's account where the singer can be seen with the phrase "Better at 70" written on his leg, a seeming allusion to his lengthy engagement announcement back in July. Baldwin even reportedly filed to trademark her beau's last name in October, so I guess this is something we should have all seen coming.

The notoriously private couple first ignited a social media firestorm when they were seen leaving a New York City courthouse on Sep. 13, 2013. Elite Daily previously reached out to Baldwin and Bieber's teams about reports of their marriage in September, but didn't hear back by the time of publication. Fans were convinced that the pair — who'd announced their engagement on Instagram just months earlier — had spontaneously decided to throw caution to the wind and exchange their "I dos." After all, when you know, you know, right? That is, until Baldwin took to Twitter just hours later to dispel the reports. "I understand where the speculation is coming from, but I’m not married yet!" she wrote in a tweet.

In hindsight, it looks like the model wanted to enjoy a few months of being Mrs. Bieber before announcing the news to the world, and I can't blame her. It looks like fans aren't even mad about the couple pulling a fast one, because the Twitterverse is seriously shipping this name change.

Now that the Bieber-Baldwin marriage saga is all cleared up, the Jailey fandom is just waiting for some belated wedding pics to make their way to the social media platform. It remains to be seen whether the new Mr. and Mrs. Bieber will stick to their original plan of holding a private ceremony in front of family and friends, but I have a feeling that we'll be hearing about it on Instagram — maybe a few months after the fact, but better late than never. Congratulations to the happy couple!

More like this
The Reason Hailey Baldwin Doesn't Use Instagram On Weekdays Makes Sense
By Sydney N. Sweeney
Lil Huddy's Instagram For Charli D'Amelio's Birthday Shows An Epic Karaoke Party
By Daffany Chan
Kim Kardashian's Response To Claims She Smuggled An Ancient Sculpture Is A Lot To Take In
By Brandy Robidoux
Stay up to date