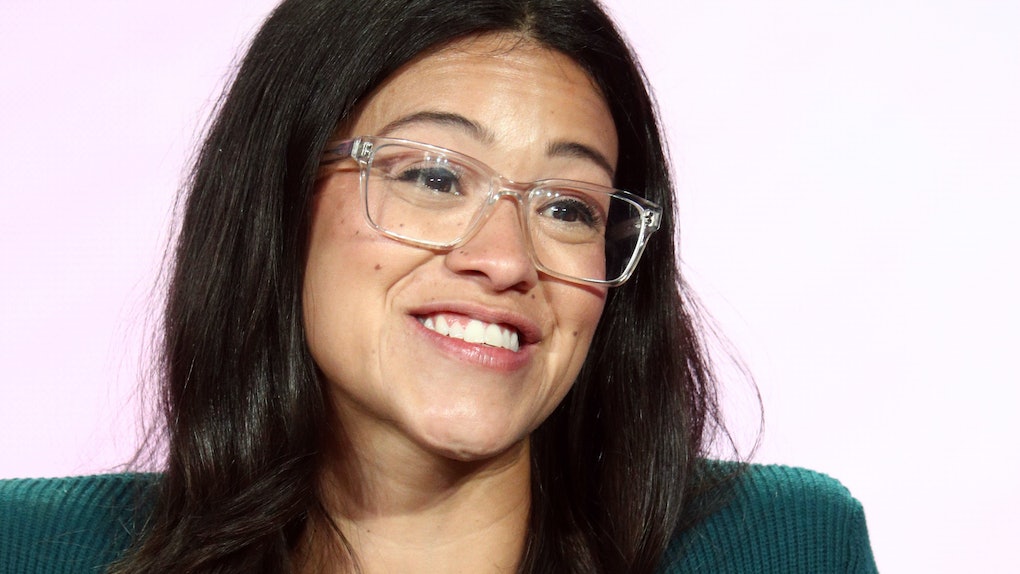 Hot take: Gina Rodriguez might be greatest human ever. Hear me out! Not only is she a phenomenal actress and inspiring feminist activist working to ensure equal representation in Hollywood, but she is also chock full of wonderful dating advice that women in their 20s will surely take to heart. A modern-day superhero! The Jane The Virgin actress recently sat down with Cosmopolitan and talked shop about all things relationships. IMHO, Gina Rodriguez's quotes about the one dating "mistake" you shouldn't make in your 20s should be carved into a plaque and hung in Central Park for all to see.

According to Rodriguez, when she was young, she received some advice from her older sister that she truly took to heart: that your 20s are all about dating. "Don't get married in your 20s," Rodriguez, now 34 years old, recounted to Cosmopolitan. "Date everyone, date every gender, just date like crazy and enjoy yourself. It was definitely something that I paid attention to. Part of me is really happy I did that, but also happy that wild phase is done. Because I did... crazy things." For Rodriguez, her 20s were all about experimentation and exploration — dating a lot of people and enjoying yourself, while simultaneously discovering she was and what she likes. But as I poured over her interview, I couldn't help but wonder: What sort of crazy things was she referring to?

Luckily, Rodriguez went on to fill in the gaps. "I experimented, and there were some times I probably could've gotten myself killed," Rodriguez said. Hold up, what?! "Well, not sexually! You know, I just...I'm a wild one. I try things that scare me at least once. I mean, I started racing cars in my teens, I did graffiti, I was a loco." So, what did all of those crazy years of adrenaline-pumping action, slightly illegal artwork, and dating with her heart, not her head, teach Rodriguez? To put herself first, above all else. Not doing so is the one dating mistake Rodriguez warns against making in your 20s.

Something I learned that I didn't do for a very long time was to put myself first. I was very much a chameleon. I was what my boyfriend wanted me to be, and I think that is because I'm an actor and I know how. But it was also because I was afraid of who I was, that I wasn't enough, or, God forbid, if he knew who I was, maybe he wouldn't want to be with me. And that was preventing me from getting to know a lot of people and letting people get to know me. That was a big mistake, because I didn't get to embrace and experience who I was.

According to Rodriguez, her days of experimentation and dating like a chameleon are now far behind her. Instead of seeking out adrenaline rushes, the actress has learned to prioritize her own health, safety, and relationships. "Now, in my 30s, I'm not doing that as much anymore," she explained. "As I get older, the more important my life becomes to me, right?" Rodriguez went on to explain that a big reason why her relationship with fiancé, Joe LoCicero, works so well is because the couple met when they were both going through transitional phases in their lives.

"I had to admit the things that I didn't necessarily like about myself: my insecurities, my vulnerabilities," Rodriguez says. "But [with fiancé Joe LoCicero], what I was lucky about was that he was already working on himself too. Timing is everything. If he was not down to go to those spaces with me, we wouldn't have worked out.It also is something that we practice on each other. Like I have a problem saying no, to friends or family or work. I don't know how to put myself first, and he 100 percent helps me with that. It's good to have a buddy that's like, Yo, I thought you were working on that. Loving myself, [I need] a daily reminder."

For Rodriguez and LoCicero, love isn't just a space they occupy together, but also as their individual selves. Self-love is a practice, and the two partake in that practice every single day. Through support and validation, the two seem to bettering themselves as both separate people, and a couple. Just when I thought Rodriguez couldn't get any greater!