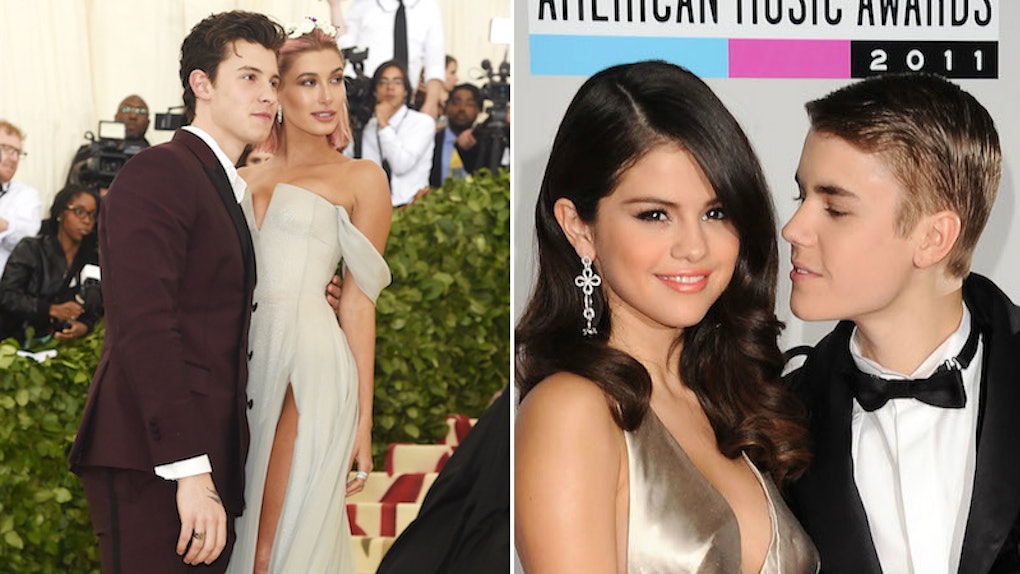 Everyone Justin Bieber & Hailey Baldwin Have Ever Dated, Because They’re Engaged Now & OMG

As if there weren't enough juicy celebrity happenings to keep us all occupied, it seems like we've been thrown yet another bone. If you haven't heard, surprise!, Justin Bieber and Hailey Baldwin got engaged this past weekend. With this in mind, it only makes sense that we take the quintessential walk down memory lane and rehash everyone Justin Bieber and Hailey Baldwin have ever dated.

News of the singer and model's engagement came to light in the wake of a few suspiciously congratulatory social media posts made by the couple's parents. A source close to the couple reportedly confirmed their engagement to CNN. Bieber and Baldwin first started dating back in 2016, but according to an interview with GQ, Bieber wasn't ready to fully commit and didn't want to mislead Baldwin.

"I don’t want to put anyone in a position where they feel like I’m only theirs, only to be hurt in the end," Bieber told GQ.

The buzz surrounding these two started up again after being spotted together many times over the past several weeks. The pair was also seen together in the Bahamas on July 6, and it was on this trip that Bieber proposed, CNN reports. Before these two lovebirds tie the knot, here's a little refresher on their respective dating histories.

First up on the list for Baldwin may come as a bit of a surprise. Back in May 2016, the model was linked to rapper Drake. Multiple sources told People that the duo was hanging out and "dating super casually." As far as we know, nothing serious ended up coming from the fling.

In January 2017, NBA Lakers player Jordan Clarkson was spotted with the model on a romantic dinner date at the well-known eatery Catch in Los Angeles, according to TMZ. Apparently, the two were also holding hands on New Year's Eve, but it's not clear when things ended between the two.

Considering Dallas and Baldwin are both signed with IMG Model Management, it's not hard to believe a romance ignited between these two. It seemed like they were hanging out quite a bit in 2017, but apparently, Baldwin wasn't looking for anything serious.

"Hailey wants to keep it low-key between them," a source told E! News. "It's not serious, but they are definitely into each other."

Most recently, before things reignited with Bieber, Baldwin was seen cozying up to Canadian singer Shawn Mendes. After attending the Met Gala together, fans could not deal and had become totally convinced these two were an item. Soon after, Baldwin shut the rumors down.

"We hang out and he's super lovely and a very, very nice young gentleman," she told The Times of London. "But I am single."

Way back in 2014, Jeffries was rumored to have been dating Bieber after they were seen riding together in a fancy car. The duo then vacationed together in Panama, but news of the couple died down soon after.

Bieber was also linked to the Instagram model, Yovanna Ventura, both in 2014 and 2015, according to PopSugar. She even attended Bieber's 21st birthday on a private island, but the romance was never publicly official.

Bieber was also rumored to be dating model Ashley Moore in March 2015 after they were spotted at a Clippers game. Even though they were reportedly PDA-ing pretty hard, the dating rumors were soon put to rest by one of Bieber's reps, according to E! News.

Another year, another romance with a beautiful model. Come 2016, Us Weekly, revealed that Bieber and model Nicola Peltz were "having sleepovers at his Beverly Hills home."

There's nothing like jet-setting with a new bae, which is exactly what Bieber and model Sofia Richie did all summer 2016. The couple reportedly went on vacay to Mexico and Japan before they called it quits.

Enter actress Paola Paulin. While there's no way to know for sure, it seems like these two only dated for a short time in October 2017. The two were often spotted attending church services together, according to Us Weekly, but again, nothing serious ended up coming from their time together.

Last, but certainly not least, we have Selena Gomez. Bieber's infamous relationship with the superstar was on-again/off-again since things began in 2009. A lot went down between these two, as all know. They decided to finally call it quits once and for all (as of now) in March of this year.

As you can see, a lot has happened in the romance department for both Baldwin and Bieber before their recent engagement. So, we'll have to wait and see if what they have can go the distance.

More like this
Justin Bieber's Quote About His First Year Of Marriage To Hailey Baldwin Is Unexpected
By Corinne Sullivan
Why Did Jennifer Lopez & Alex Rodriguez Break Up? She Dropped A Hint On Instagram
By Candice Jalili
Zoë Kravitz's Instagram With Taylour Paige Shows Them Looking So Happy Together
By Candice Jalili
Stay up to date